17 new confirmed deaths, 290 cases due to COVID-19 in Massachusetts, reports the state Saturday 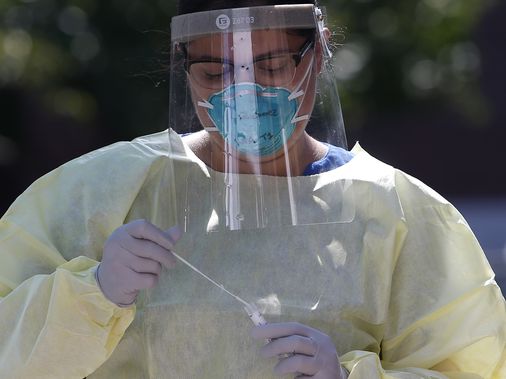 The death toll from coronavirus rose on Saturday 17, according to state reports, bringing the total confirmed deaths in Massachusetts to 8,406. Confirmed cases of illness also grew by 290 and reached a total of 110,077.

A total of 1,193,200 people have undergone molecular tests for the virus, including 12,595 new people tested as of Saturday, according to state reports.

The seven-day weighted average positive rate for molecular tests was 2.1

% on Friday. After remaining below the percent for most of July, the positive rate returned to that level on July 26th and rose to 2.1 percent on Thursday.

The three-day average of confirmed COVID-19 deaths increased from 13 Tuesday to 14 on Wednesday.

There were 220 probable coronavirus deaths as of Saturday, and the state has not reported any new probable deaths from COVID-19.

Probable cases of the disease amount to 7,963 as of Saturday, an increase of 138 over the previous day, according to the state.

The state also reported that 784 new people received antibody tests, for a total of 96,964 people tested as of Saturday.

Four hospitals have used peak capacity to treat COVID-19 patients as of Friday, according to the state. It’s since Thursday, when there were three hospitals.

And the average three-day number of patients hospitalized with coronavirus was 361 as of Friday, down from 368 on Thursday.

Due to continued delays in communicating test results to the Department of Public Health, the count of Saturday cases “appears higher than usual,” the state said in Saturday’s dashboard report.

John Hilliard can be reached at john.hilliard@globe.com.