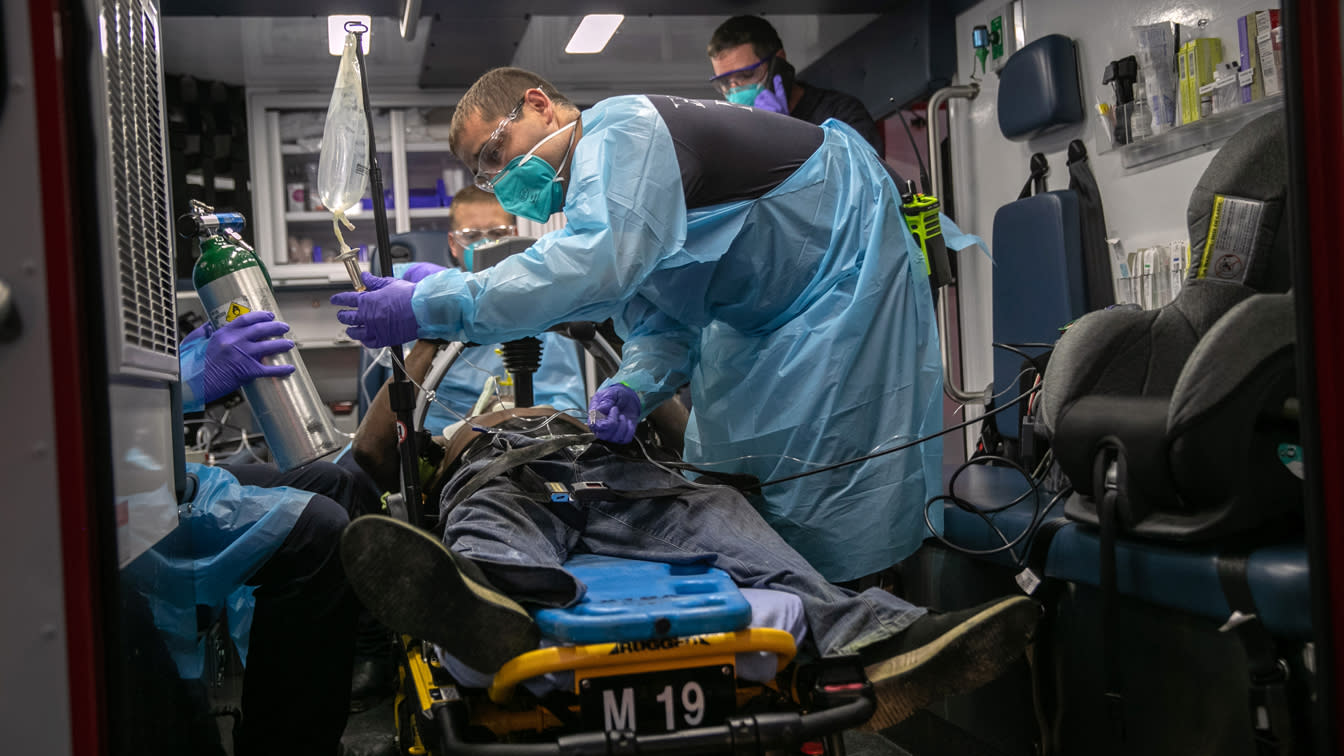 After a spring that saw America̵

7;s coronavirus toll soar to more than 36,000 cases and 2,700 deaths per day, followed by a summer where daily cases soared to 75,000 and daily deaths again wiped out 1,400, it seems for the moment that the overall trajectory of the US pandemic goes in the right direction. On average, new cases per day have returned to 36,000. Daily deaths have dropped to around 700.

Yet experts have long feared that colder weather, increased indoor activities, school reopening and holiday reunions could combine to create an autumn wave with the potential to dwarf previous peaks – and now modelers America’s major COVID-19 are projecting just that.

So is it time to go crazy for fall?

On Thursday, the team from the University of Washington’s Institute for Health Metrics and Assessment (IHME) released its latest predictions on the pandemic. It wasn’t encouraging. In the most likely scenario, IHME researchers now predict that another 220,000 people will die of COVID-19 by the end of 2020, bringing America’s total death toll to 410,000 and more than doubling the current tally of 190,000, which it took the United States tragic nine months to arrive, in less than half that time.

Estimated daily infections, which IHME currently records about 140,000, would nearly triple to 373,000 by mid-November. By early December, the daily deaths would exceed April’s highs.

And things could get even worse than that, the institute warns. If, for example, America continues “the gradual easing of social distancing mandates” and refuses to “re-impose them” even as the pandemic worsens – essentially pursuing the kind of natural “herd immunity” strategy that the new councilor Trump’s coronavirus favors – so the IHME predicts total deaths from COVID-19 in the US will rise to 620,000 by the end of the year, with daily deaths exceeding 12,000 and daily infections increasing to 1.8 millions.

The only way to keep the death toll below 300,000 this year, according to the IHME, is for everyone – that’s 95 percent of Americans – to immediately start wearing a mask whenever they leave the house. Given that only 45% of Americans currently masquerade in public, that probably won’t happen.

So yes, IHME’s predictions are scary. The question is whether it is credible.

The truth is that no one, not even the leading coronavirus experts, has the slightest idea how the pandemic will evolve in the next four months. This is scary in and of itself, of course. But it’s also why projecting the exact number of deaths and infections four months in advance is almost certainly misleading.

Scientists are still uncertain about the role children play in transmission and how this role changes with age. So anticipating the effect of school reopening is practically impossible.

We know the virus tends to spread through the air more easily than previously believed, but what will it mean when temperatures drop and people retreat indoors? As a result, will they be less likely to get together? Or they will be More are they likely to congregate instead – and in riskier, unventilated environments?

The same is true for the effect of temperature and humidity itself; studies suggest that time “likely affects COVID-19 transmission,” just like other coronaviruses. But the researchers don’t know how much.

And what about the removal of fatigue? What if the irresistible charm of a hearty Thanksgiving dinner or a cozy Christmas morning persuades more Americans to give up, once and for all, staying within 6 feet of friends and family?

All this and we haven’t even mentioned the potential impact of a vaccine, which is expected to arrive, at least in limited quantities, by the end of 2020 – or the knock-on effects of current university epidemics, which could sow hot spots elsewhere as students return to. holiday home.

The whole point of a prediction like that of the IHME is to take into account as many of these variables as possible in mathematical form. That’s what a model is. And to be fair, the IHME’s main projection makes some reasonable assumptions: that testing, which is slightly down, will rise again when cases start to rise; that the use of the mask will remain constant; this drift will increase as the pandemic worsens.

But the IHME also makes another assumption that may not be that reasonable. According to an analysis By Joshua Salomon, an infectious disease and modeling expert at Stanford University, the variable “projections of 220,000 more deaths by New Year” is “non-behavior” and “no use of masks” – “no tests”.

“Seasonality is measured using state-specific weekly vital statistics on pneumonia mortality from 2013 to 2019,” Salomon explains. “As far as I can guess, the estimated increase from 900 to 2900 daily deaths comes entirely from this seasonal effect.”

It is certainly possible that whatever seasonal factor triggers our annual peaks in pneumonia mortality will have the same impact on COVID-19 and that, as a result, we are doomed to double our national death toll by charging in the last months of the year to the dangerously high rate of 36,000 new cases per day.

But again, no one has enough information yet to mathematically estimate how pneumonia seasonality and COVID-19 seasonality are related, let alone say if they are linked. Stratifying this hypothesis on other hypotheses to predict a very precise number of deaths (410,451) by a very precise date (January 1) suggests many certainties where in reality there is very little.

To get an idea of ​​how wrong the IHME prediction can be, it’s worth comparing it to a different model. At covid19-projections.com, Youyang Gu, an independent data scientist trained at the Massachusetts Institute of Technology, used a data-driven approach with an artificial intelligence layer (read: less subjective assumptions) to predict the trajectory of the pandemic.

According to Gu’s model, daily deaths will drop to 400 by November 1, less than a quarter of the November 1 IHME projection of 1,825. At that point, according to Gu, total deaths from COVID-19 in the United States will hover around 219,000, about 35,000 less than the IHME forecasts.

After November 1, Gu’s model stops making projections. Most other models don’t look to the future for more than a week or two. Gu foresaw three and a half months, but he reduced his time frame to two months because “dynamics may change in the fall and it is not clear how [they] will change. “

“In June”, him explained on Twitter, “The main driver [was] reopening, and that’s something we can reasonably model. “But” nobody knows what will happen after November, so … any model with forecasts beyond November must be taken with a grain of salt. ”

Incidentally, Gu’s model has been the most accurate to date – far more accurate, in fact, than IHME’s, which has swung wildly and rarely matched reality.

“Predicting certainty when there is very little,” Gu wrote on Twitter, “can undermine public confidence in the scientific community.”

It can also terrify people. Indeed, a little fear can go a long way in a deadly global pandemic. The more Americans dress up, keep their distance, avoid indoor gatherings, isolate students at the first sign of an epidemic, and test and quarantine vacation travelers, fewer of them are likely to die this fall from COVID-19.

But it is too early to quantify the expected impact of such measures, or of time, or how these measures and time will interact.

For now it should be enough to say, how Gu recently did on Twitter, that knowing what we already know, tens of thousands more Americans, and possibly even more than 100,000, are at risk of losing their lives this year to COVID-19. Here hopefully the unknown is no more deadly than that – and that fear of the unknown prevents America from letting it become even more deadly.