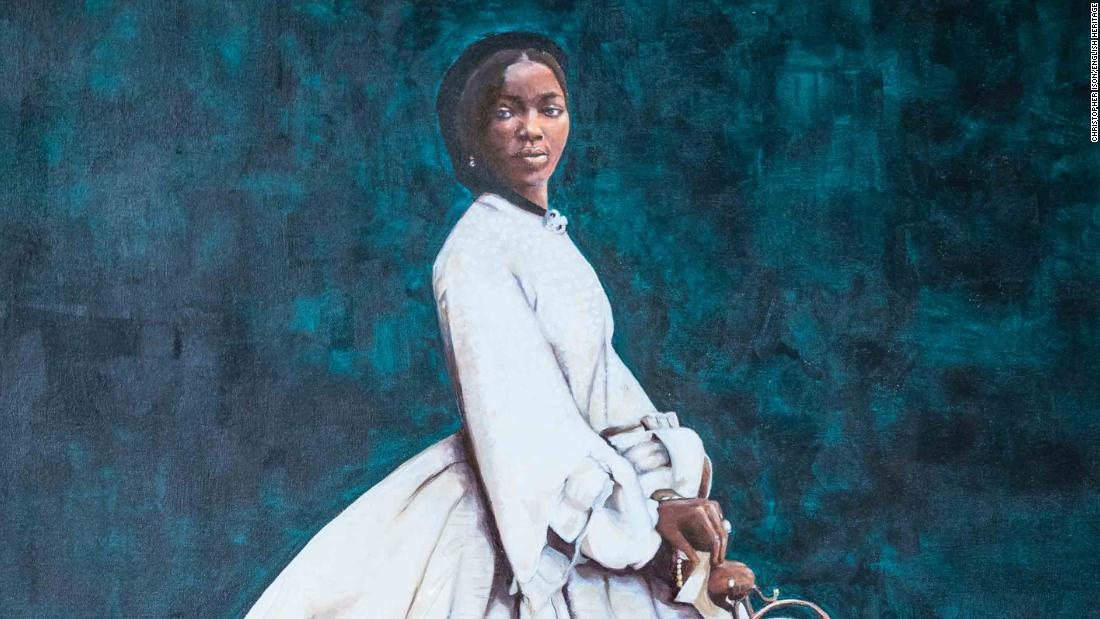 A painting of a former African slave who became Queen Victoria’s goddaughter has been unveiled in Osborne, the former British monarch’s beach house.
The work, by Hannah Uzor, is part of a series of portraits detailing the previously overlooked lives of black figures that will be commissioned by the charity English Heritage.

Bonetta painting by artist Hannah Uzor (pictured with the painting) is on display in Osborne throughout October during Black History Month. Credit: Christopher Ison / English Heritage

It depicts Sarah Forbes Bonetta in her wedding dress and is based on a photograph from the National Portrait Gallery in London. It will be on display in Osborne throughout October, which is Black History Month in the UK.
Bonetta was the daughter of an African ruler who was orphaned and sold as a slave at the age of five, according to English Heritage, which takes care of more than 400 historic buildings, monuments and sites.

Originally called Omoba Aina, she was presented as a “diplomatic gift” to a British navy captain, Frederick Forbes, and brought to England.

A few months after her arrival in England, Forbes introduced Bonetta to Queen Victoria at Windsor Castle. The second longest-lived monarch of the United Kingdom wrote in her diary in 1851 that Bonetta was “a really clever little thing”. Forbes described her in the ship’s diary as “a perfect genius” with “a great talent for music”.

The queen paid for her education and became her godmother. Bonetta married a Sierra Leone-born merchant, James Davies, in 1862 and their first daughter was named after the monarch, who also became his godmother.

They remained close throughout Bonetta’s life and Victoria continued to follow the progress of her children, whom she met several times. In an 1873 diary entry, Victoria wrote: “I saw Sally Davis’ little girl, Victoria who is now 8, and wonderfully like her mother, very black and with beautiful eyes.”
When Bonetta died in 1880, young Victoria sought solace from the queen in Osborne, she said in an English Heritage statement Wednesday.

“Through my art, I’m interested in exploring those black forgotten in British history, people like Sarah,” Uzor said. “What I find interesting about Sarah is that she challenges our assumptions about the status of women of color in Victorian Britain. I was also attracted to her because of the parallels with my family and children, who share Sarah’s Nigerian heritage. “.

English Heritage said it plans to show more portraits of other black figures next spring with links to some of the historic sites under its care. These include the African-born Roman emperor Septimius Severus, who strengthened Hadrian’s Wall, and James Chappell, a servant of Kirby Hall, who saved the owner’s life.

“These stories go back a long time and we are eager to represent their voices too,” Anna Eavis, curatorial director of English Heritage, told CNN on Wednesday. “It is important and possible that visual images act as a vehicle for the many cases in which this island has welcomed or welcomed different cultures.”

The history of blacks is “part of English history,” he added, and the English Heritage series of portraits is part of the research on the links between the slave trade and the sites entrusted to the charity. From 2021, a new interpretation on some sites will highlight those links.

The news comes after another charity, the National Trust, admitted in an interim report in September that 93 historic sites in its care have ties to colonialism and slavery. About 26 of English Heritage’s properties have ties to the slave trade, a 2007 report commissioned by the charity showed.

“Britain’s black history is by nature a global history,” said British historian David Olusoga in his book “Black and British: A Forgotten History”, adding: “Yet too often it is seen as just the history of migration. , settlement and community formation in Great Britain itself “.

In an essay he presented on BBC radio last year, he said Bonetta’s story was “so extraordinary” that “he found it hard to believe when he first saw her.”