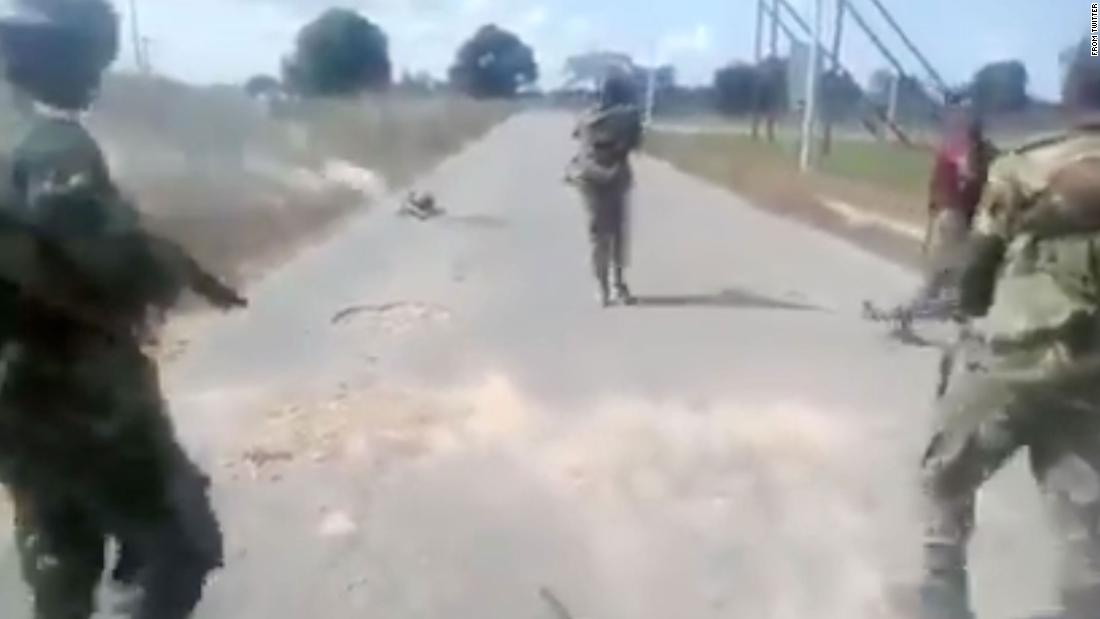 In the nearly two-minute video, men wearing military uniforms are seen chasing a naked woman, surrounding her and verbally harassing her along a rural road. One of the men repeatedly beats her with a stick before another shoots her at close range.

She is then repeatedly hit by the men as she lies on the road before one of the men shouts “Stop, stop, that’s it, it’s done.”

The video ends when the men turn and leave, with one of them announcing, “They killed al-Shabaab,” the local name given to the growing insurgency in the far north of the country.

It has no known links with the Somali terrorist group of the same name. The man in uniform looks directly into the camera and raises his two fingers before the recording stops.

“The horrendous video is another gruesome example of the grave human rights violations taking place in Cabo Delgado by Mozambican forces,”

In its own analysis of the video, the human rights group claims that the men wore the uniform of the Mozambican army. Amnesty claims that four separate gunmen shot the woman a total of 36 times with AK-47s and PKM-style machine guns. His investigation concluded that the incident occurred near Awasse, in the country’s northernmost province, Cabo Delgado.

“The incident is consistent with our recent findings of appalling human rights violations and crimes under international law occurring in the area,” Muchena said.

CNN could not independently determine the authenticity of the video, the date and place it was filmed, nor the identity of the gunmen.

“When they want to produce their propaganda against the security and defense forces, against the state of Mozambique, they remove those signs / characters that identify them and make videos to promote an image of atrocity practiced by those who defend the people”, he said.

Cabo Delgado is home to a $ 60 billion natural gas development that is heavily guarded by Mozambique’s military and private security.

The insurgents have been accused by the government and human rights groups of their own violent abuses, including beheadings, looting and indiscriminate killings of civilians.

And the interior minister highlighted those alleged abuses on Tuesday.

“Once again, our country continues to be the object of aggression by terrorists, particularly in the province of Cabo Delgado, where they have committed cruel, inhuman, atrocious acts against our population,” Miquidade said.