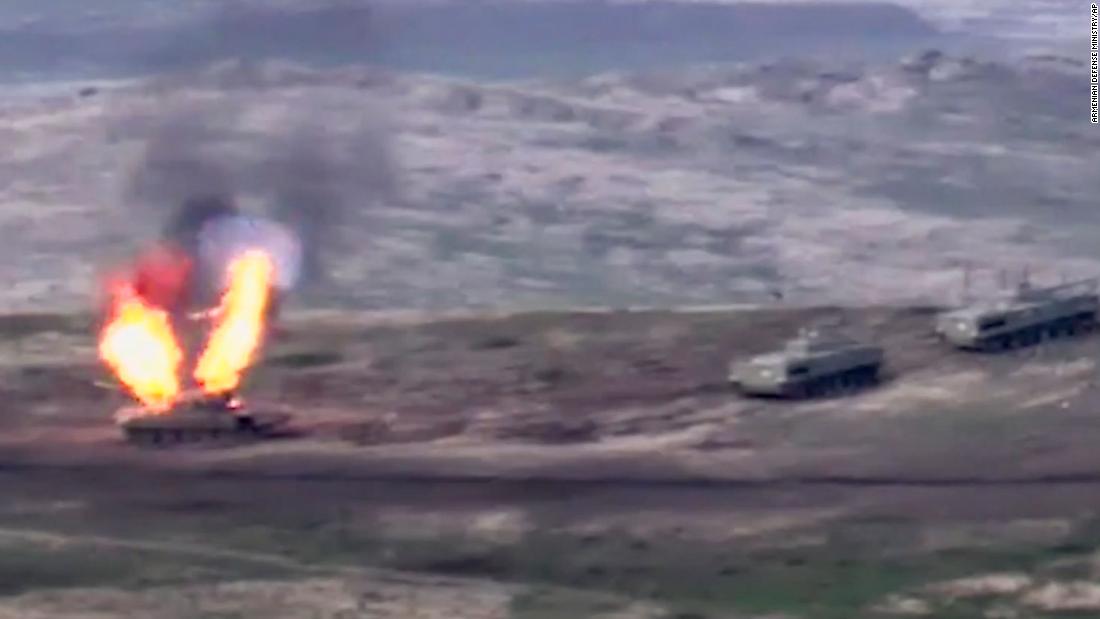 Neighboring former Soviet republics have long been in conflict over the territory – which lies within the borders of Azerbaijan – and fought a war over it which ended in 1994.

Despite the conflict ending in a Russian-brokered ceasefire, military skirmishes between the two sides are not uncommon.

While Armenia said it was responding to missile attacks launched by its neighbor on Sunday, Azerbaijan blamed Armenia for the clashes.

In response to Azerbaijan’s alleged firing of bullets, Armenian Prime Minister Nikol Pashinyan tweeted that his country had “shot down 2 helicopters and 3 UAVs, destroyed 3 tanks”.

Following the escalation of tensions, the Armenian government decided to impose martial law and to order a “general mobilization”

Armenia previously said its neighbor had targeted civilians in peaceful areas, including the capital of the Stepanakert region.

However, Azerbaijan has suggested that Armenia was responsible for the latest blaze between the two countries.

Hikmet Hajiyev, assistant to the president of the Republic of Azerbaijan and head of the presidential administration’s foreign affairs department, tweeted on Sunday: “There are reports of civilians and military deaths and injuries. Massive damage has been inflicted on many homes. and civil infrastructures “.

Accusing Armenia of “an act of aggression and use of force”, Hajiyev added that “Armenia’s political-military leadership bears full responsibility”.

“Currently, the Azerbaijani army is taking retaliatory action and our troops are in complete control of the operational situation,” the Azerbaijani Defense Ministry said in a statement on Sunday.

But Armenia’s Ministry of Foreign Affairs said in a statement: “We strongly condemn the aggression of the Azerbaijani political-military leadership.”

“Azerbaijan’s political military leadership bears full responsibility for the consequences of their aggression,” the statement added.

The fighting between the two sides has escalated in recent months.

In 2016, dozens of soldiers from both countries died in the clashes. Two years earlier, then UN Secretary-General Ban Ki-moon had urged Armenia and Azerbaijan to “commit to an immediate reduction of the escalation and to continue the dialogue” after reports of violence and casualties along the border.

The Nagorno-Karabakh region is internationally recognized as part of Azerbaijan but is ruled by a majority group of ethnic Armenians.