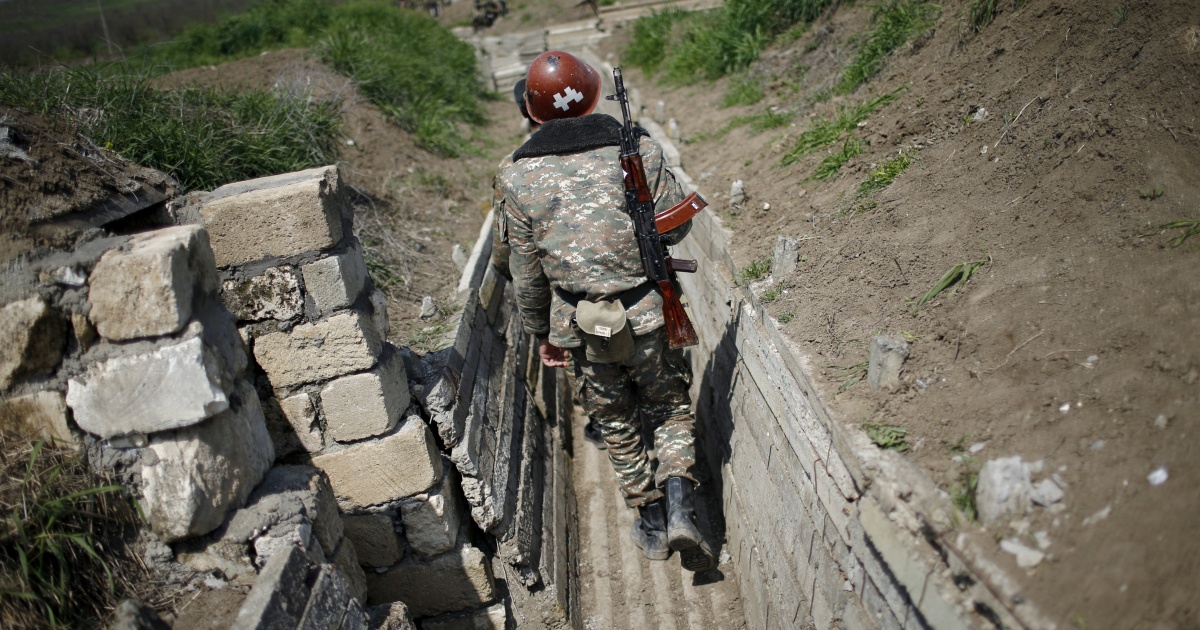 Turkey, Russia, France and other countries are reacting to the great explosion of violence in the disputed Nagorno-Karabakh region.

Armenia and Azerbaijan got on a war footing after heavy fighting broke out in the disputed Nagorno-Karabakh region.

Amid mounting tensions, the international community reacted to Sunday’s fighting between the two bitter enemies.

This story will be updated as more reactions arrive.

Iran has called for an immediate end to the conflict between Armenia and Azerbaijan after clashes between the two countries, a foreign ministry spokesman said on state TV, announcing Tehran̵

“Iran is closely monitoring the conflict with concern and is calling for an immediate end to the conflict and the start of talks between the two countries,” Saeed Khatibzadeh said.

“Tehran is ready to use all its capabilities to help initiate talks between the two sides.”

Azerbaijan’s ally, Turkey, blamed Armenia for the flare-up and pledged its “full support” to Azerbaijan.

“While I ask the Armenian people to seize their future against their leadership that is dragging them towards catastrophe and those who use it as puppets, we also ask the whole world to stand with Azerbaijan in their battle against invasion and cruelty “, Turkish President Recep Tayyip Erdogan said on Twitter, adding that Turkey” will continue more and more “its solidarity with Baku.

We strongly condemn the Armenia attack on Azerbaijan. Armenia has again violated international law and has shown that it has no interest in peace and stability.

Turkey is in full solidarity with Azerbaijan and unreservedly supports its right to self-defense.

“The biggest obstacle to peace and stability in the Caucasus is Armenia’s hostile position, and it must immediately turn its back on this hostility that will set the region on fire,” Akar said.

“We will support our Azerbaijani brothers with all our means in their struggle to protect their territorial integrity,” he added.

France, co-chair of the OSCE Minsk Group that mediates between Armenia and Azerbaijan in an attempt to find a peaceful solution to the decade-long Nagorno-Karabakh conflict, has called on Yerevan and Baku to end hostilities and immediately restart dialogue.

Together with the United States and Russia, France is a co-chair of the Minsk group.

Russia, co-chair of the Minsk group, has also called for an immediate ceasefire.

“We call on the parties to stop the fire immediately and start talks to stabilize the situation,” the Russian Foreign Ministry said.

Charles Michel, president of the European Council, called for an end to the fighting and an “immediate return to negotiations”.

“Military action must stop, urgently, to avoid further escalation”, tweeted Michel, calling for “an immediate return to negotiations, without preconditions”.

Reports of hostilities from the Nagorno-Karabakh conflict zone are of grave concern.

Military action must stop, as a matter of urgency, to avoid further escalation.

An immediate return to negotiations, without preconditions, is the only way forward.

Germany also called for an “immediate” suspension of the fighting, urging a return to dialogue to resolve the dispute.

“I ask both sides in the conflict to immediately stop all hostilities, especially the bombing of villages and cities,” Foreign Minister Heiko Maas said in a statement, expressing “alarm” at reports of civilian casualties.

“The conflict over the Nagorno-Karabakh region can only be resolved through negotiations,” added the German foreign minister, whose country currently holds the rotating presidency of the European Union.

Pope Francis said he is praying for peace in the Caucasus region.

“I pray for peace in the Caucasus and I ask the warring parties to make gestures of goodwill and brotherhood that can lead to solving problems not with the use of force and weapons, but through dialogue and negotiation”, the leader del Romano The Catholic Church said.

A Venezuelan ship carrying 1.3 million barrels of oil is tilting and could lead to a catastrophic oil spill