Belarus: 100,000 Join Demonstration Against Lukashenko on the Eve of Putin’s Showdown | Belarus 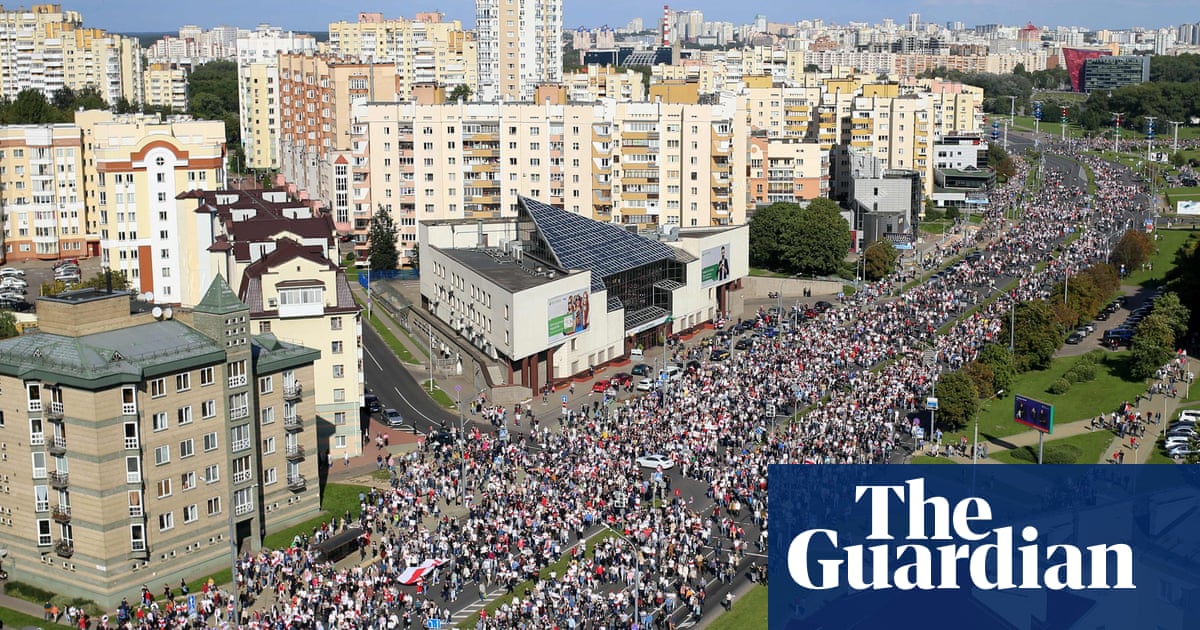 Attempts by Belarusian president Alexander Lukashenko to crack down on popular protests against him failed on Sunday when more than 100,000 people marched on his residence in the capital, Minsk, with other demonstrations across the country.

There was no sign that the anti-Lukashenko movement was waning or fading. Instead, protesters took to the streets in large numbers for the fifth consecutive weekend, challenging the riot police who blocked the city center with military vehicles.

The continuing scale of the protests is an embarrassment for Lukashenko, who will meet Vladimir Putin in the Russian town of Sochi on Monday. It will be their first face-to-face meeting since the Belarusian presidential election on 9 August, widely regarded as rigged.

7;s claim that he had won a landslide victory sparked a popular uprising against his 26-year rule. In recent days, its security forces have tried to resume the initiative by kidnapping and exiling members of the main opposition body, the Coordination Council.
Supporters of the opposition carry a huge flag of the pre-Soviet republic of Belarus. Photograph: TUT.BY/AFP/Getty Images

But the strategy failed to quell the anti-government mood. On Sunday the protesters gathered in Minsk for the last protest on Sunday afternoon. They tried to mislead the authorities by changing course and walking towards Drozhdy, where senior officials of the regime, including Lukashenko, have their homes.

Riot police wearing balaclavas charged groups of protesters, knocking them to the ground and dragging them away. At least 250 people were arrested and dumped in minivans. The detentions follow Saturday’s arrest of 114 people during a women’s peaceful march in Minsk.

Protesters carried the red and white flags of the pre-Soviet Belarusian republic, which became a symbol of the protests. The slogans included “Resign”, “We are the power here” and “Shame”, shouted at a long line of masked cops who barricaded their path at the Arena City mall.

Similar protests and arrests took place in other Belarusian cities, including Brest, Gomel, Grodna and Mogilev.

The opposition slogan for Sunday’s protest was: “We do not allow them to sell the country.” It is feared that a weakened Lukashenko will allow the Kremlin to take control of Belarus in exchange for Russian support and security assistance that will allow it to remain in power. Some in the crowd carried signs critical of Russia.

Monday’s meeting in Sochi will likely be a delicate balancing act. Lukashenko wants Putin’s support, but insists he is unwilling to give up the country’s sovereignty. Putin, meanwhile, has long found Lukashenko a frustrating and unreliable partner, but has decided to back him, at least for now.

But by supporting an unpopular ruler past his due date, Putin risks transforming public sentiment against Russia. Opposition figures have made it clear that their quarrel is not with Moscow but with a president they deem illegitimate and whose brutal tactics have alienated many.

“Belarusians are truly horrified at Putin’s support for Lukashenko,” who has become “totally alien to his own people,” Valery Tsepkalo, an opposition politician, told Bloomberg on the phone from exile in Poland.

There is a risk that “Russia will turn the friendliest neighbor they have into a population that sees them as an accomplice of Lukashenko and his authoritarianism,” said Nigel Gould-Davies, former UK ambassador to Belarus.

Evidence suggests Lukashenko is determined to defy international pressure and use any means necessary to wipe out the opposition.

Last week masked men in civilian clothes kidnapped Maria Kolesnikova on the street in Minsk. Kolesnikova is one of three leading female opposition figures who led the election campaign against Lukashenko. The police also kidnapped Maxim Znak, another member of the seven-person presidium of the Coordinating Council.

Kolesnikova was taken to the Ukrainian border but tore her passport early Tuesday and refused to leave the country. She is now in a preventive detention center of the Ministry of the Interior and has been accused of calling for a coup. Kolesnikova faces between two and five years in prison.

Svetlana Tikhanovskaya, who opposed Lukashenko and is now in exile in Lithuania, paid tribute to those inside the country who are resisting Lukashenko’s rule on Sunday. “In the last month we have become a truly heroic people. We are continuing our struggle for freedom, “he told supporters in a video speech.

People hold a former white-red-white flag of Belarus as protesters gather in front of the Belarusian embassy in The Hague, the Netherlands. Photograph: Koen van Weel / ANP / AFP / Getty Images

On Friday, the United States said it would impose new sanctions on Belarusian figures within days and warned Moscow that continuing to support Lukashenko would only alienate its people. US Deputy Secretary of State Stephen Biegun asked how Moscow could “support such a regime and such violence against peaceful citizens”

“If the Kremlin continues on this path, it risks turning the Belarusian people, who have no remorse with Russia, against Moscow,” he said.

The European Union said on Saturday that it deplored “the increasingly open contempt for the rule of law in Belarus” and reiterated its determination to impose sanctions. He said he was “ready to take further restrictive measures if necessary”.