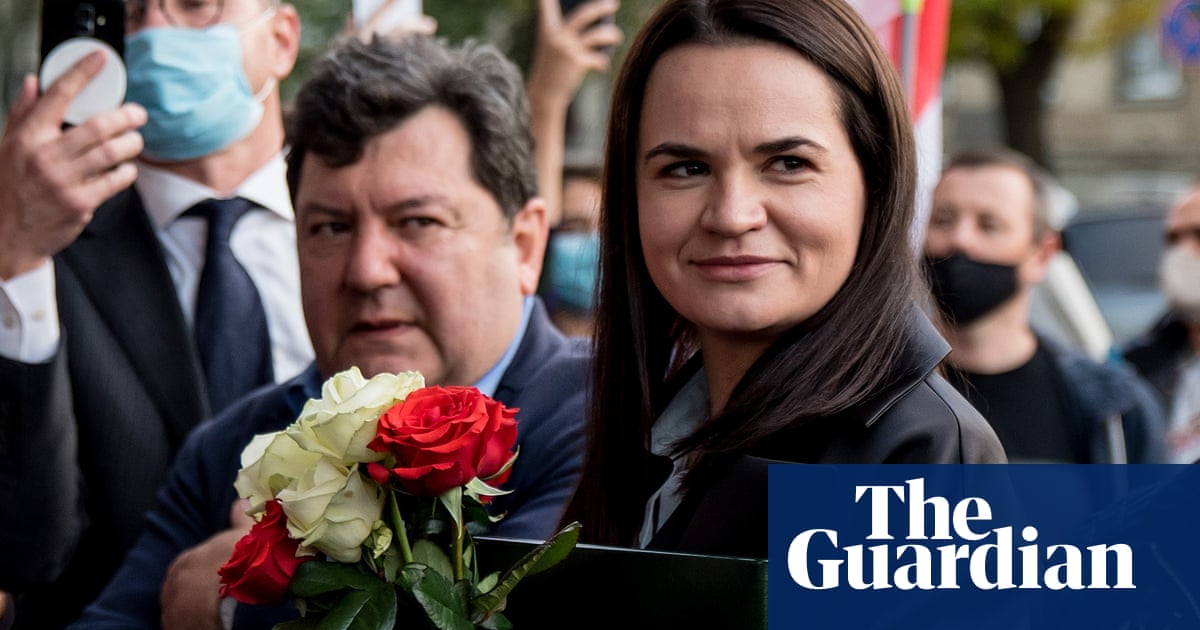 Belarusian opposition leader Svetlana Tikhanovskaya will meet Angela Merkel in Berlin on Tuesday, as the stalemate in Belarus increasingly takes on a geopolitical dimension, becoming another topic of contention between Russia and the West.

Tikhanovskaya said he will ask the German Chancellor about “his potential participation as mediator” in talks between protest leaders and the government of the warring autocrat Alexander Lukashenko, who was backed by Russian President Vladimir Putin and flatly refused to participate. in negotiations.

“We will discuss ways to put pressure on Belarus, because Belarusians think that only with pressure can we force the authorities to talk to the people,”

; Tikhanovskaya said in a Skype interview from his office in Vilnius. She has resided in the Lithuanian capital ever since she was forced to leave Belarus after being threatened in conversation with officials the night after the disputed August 9 elections, which saw Lukashenko win a sixth term.

“The Belarusian people already consider Lukashenko illegitimate,” he said. “When we talk about negotiations with the government, we are talking about people below; some people should take responsibility and start these negotiations to find a way out of the crisis. “

Tikhanovskaya, who officially received only 10% of the votes in the elections, has declared herself a national leader and wants to be a transitional figure until new free elections can be held. Over the past two months, massive protests have rocked Belarusian cities every weekend, with authorities responding with arrests, violence and threats. On Sunday, the police again arrested the protesters in Minsk.

Tikhanovskaya has received more and more support from Western politicians, meeting the French president, Emmanuel Macron, in Vilnius last week and the Polish Prime Minister, Mateusz Morawiecki, before that. After visiting Berlin, he will travel to Bratislava to attend an international conference.

Tikhanovskaya and other protest leaders wanted to emphasize from the outset that theirs is not an anti-Russian or pro-EU movement and does not have a geopolitical agenda. But as Lukashenko clings, relying on Russia’s support, his claims that the opposition wants to remove Belarus from Russia could become a self-fulfilling prophecy.

In the first two weeks of the protest, the Kremlin seemed to have sat down and weighed its options, but soon after there was a change of tone in official statements and on Russian state television, calling Lukashenko the legitimate president and suggesting that the protesters had support from abroad.

While Tikhanovskaya meets Macron and Merkel, Lukashenko traveled to Sochi to meet Putin and received a number of Russian regional governors in Minsk, who showered his regime with praise. The Kremlin declared the opposition coordinating council unconstitutional and Putin’s spokesman Dmitry Peskov described Tikhanovskaya’s meeting with Macron as “a meeting between the French president and a Belarusian citizen”.

Tikhanovskaya said she and her team have not received any contact from Russian officials, not even informally or through intermediaries. He admitted that perhaps the opposition should have made an effort to speak to Russian representatives in the early stages of the protest movement. “We were open to talking to everyone and we have said this many times, but perhaps we should have taken some steps to proactively seek this dialogue,” he said.

Tikhanovskaya said the Kremlin should realize that betting on Lukashenko is bad policy. “They are experienced politicians and I am sure they can see that the Belarusians cannot accept these current authorities and they cannot forgive them,” she said.

When asked what he would have said if Putin had called her, Tikhanovskaya replied: “I would say that I am glad to hear your opinion, Vladimir Vladimirovich. Let’s talk about the fact that the Belarusian people in their country want to make decisions about who wants to build the country. , and the Belarusian people can no longer live under the dictatorship, because we have changed “.

He said he would also ask Putin to act as a mediator, but said that if the Kremlin asked for a guarantee that a new government will not leave the State of the Union, the current alliance between Moscow and Minsk would not be able to give it. , words that risk alarming the Kremlin.

“I will not speak for the future president of Belarus … if the majority wants to build closer relations with one or the other country, it is the will of the people and the president will do what the people want.”

Tikhanovskaya, a 38-year-old former English teacher, had no political experience before this summer, when she became a last-minute presidential candidate. Her husband, Sergei Tikhanovsky, a famous YouTube blogger, had planned to run for election in August but was jailed, along with another would-be candidate, banker Viktor Babariko.

Tikhanovskaya said she would run in for her husband and be allowed to vote, apparently because Lukashenko believed a woman would not pose a threat. However, a growing mood of protest coalesced around her and led to anger when the official results were announced. Tikhanovskaya said he still has no ambitions to be long-term president, just to act as a transitional figure, and said he is getting used to his new role in international diplomacy.

“I wasn’t prepared for such high-level speeches, it would take a long time to prepare, but life pushed me to do it, and I think I do it well,” she said.