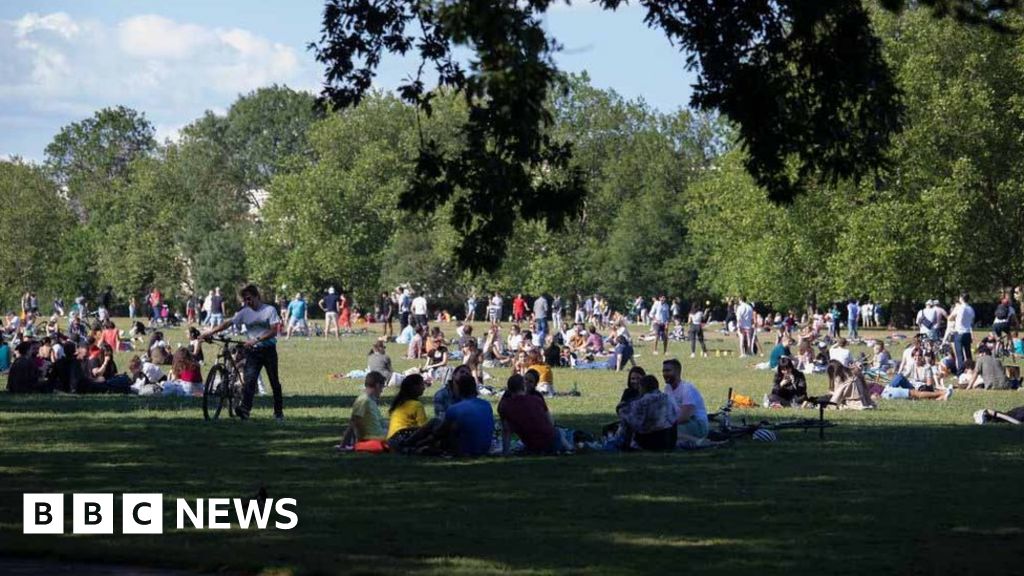 People in the UK must not treat this weekend as a “holiday” before the new “rule of six” coronavirus restrictions go into effect on Monday, a police union warned.

The Police Federation said there is a “real risk”

; that the public “takes advantage of the current situation”.

The new rules limit gatherings to six people indoors and outdoors in England.

It comes when a scientist warned that the UK was “on the verge of losing control” of the virus.

The new English six rule applies to all ages, although there are some exemptions, such as business meetings. Those who do not comply with the new rules can be fined by the police: £ 100 for the first offense, doubling for each further offense up to £ 3,200.

In Scotland, socialization will be limited to a maximum of six people indoors and outdoors, but unlike in England they must come from two families and children under 12 are exempt.

In Wales, also from Monday, it will be illegal for more than six people from an extended family to meet indoors, but up to 30 can still meet outdoors.

In Northern Ireland last month, meanwhile, the number of people who could gather at home in a private home was reduced from 10 people from four families to six people from two families.

With the introduction of the new rules in England and Wales postponed until Monday, John Apter, President of the Police Federation for England and Wales, said: “There is a real risk that some members of the public will take advantage of the current situation and consider this weekend as a holiday weekend in view of the stricter restrictions introduced on Monday.

“Using the current situation as an opportunity and an excuse to celebrate would be incredibly irresponsible and would put pressure not only on the police, but potentially on the ambulance service and the NHS.”

Tim Robson, Northeast Representative for the National Pubwatch Program, said he expected police officers to rigorously monitor the bars on weekends to make sure they operated safely.

“There is an anticipation that everyone will have one last binge, but people are starting to get scared and many licensed locals have already been repressed by the police,” he said.

Mr. Robson, a former police officer, said it would be up to licensees to manage their premises and separate large groups from gathering together in a dangerous way.

On Saturday, the government announced that there were a further 3,497 coronavirus cases in the UK.

In Scotland, daily coronavirus cases hit a four-month high, with a total of 221 people testing positive for the virus in the past 24 hours, the highest daily figure since May 8.

The virus is still at much lower levels across the UK than its April peak, but a study of thousands of people in England found cases double every seven to eight days.

The professor. Sir Mark Walport, a member of the Sage government’s science advisory group, told BBC Radio 4’s Today program: “It should be said that we are on the verge of losing control.

It comes as final clinical trials for a vaccine, developed by AstraZeneca and the University of Oxford, are about to resume. They were put on hold last weekend after a participant became ill.

The AstraZeneca-Oxford University vaccine – attended by 18,000 people from around the world – is seen as a strong contender among dozens in development globally.

Meanwhile, Cabinet Minister Michael Gove said the rule of six is ​​”well understood” as a public health message and has had public support.

“As always, the important thing is balance – eating out, seeing friends – that’s okay, as long as we do it in a socially responsible way, that’s what the rule of six is ​​about,” he told the BBC.

However, Mr. Gove also admitted that fines may be needed to enforce the regulations.

“I don’t want fines to be imposed, but even more I don’t want people to behave in a way that puts the most vulnerable at risk,” he said.

The R number was brought between 1 and 1.2 for the first time since March. Any number above one indicates that the number of infections is increasing.

And in addition to a general increase in cases in the community, the government’s latest coronavirus surveillance report shows a large increase in people over the age of 85 testing positive.

Asked about Prof Walport’s claim that the UK was “losing control”, Gove said it was “a warning to us all”.

“There is a range of scientific opinions, but one thing that practically every scientist agrees on is that we have seen an increase in infection and therefore we should take public health measures.”

It comes after people across England told BBC News they are struggling to access coronavirus tests.

Health Secretary Matt Hancock said last week that no one should travel more than 75 miles for a test, after the BBC revealed that some had been sent hundreds of miles away.

But some have now reported not being able to book a tampon.

The Department of Health and Social Care (DHSC) said the testing capacity was targeted to the most affected areas.