Breaking News
Home / US / Covid-19 vaccine: how an EUA can affect timing

Covid-19 vaccine: how an EUA can affect timing 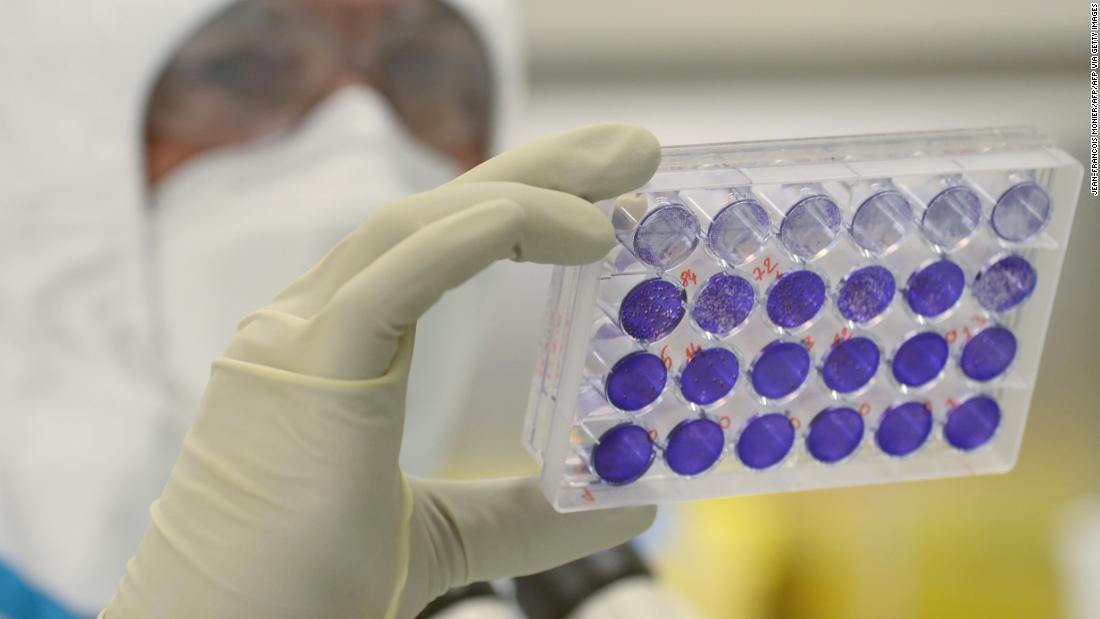 There is a lot of ongoing concern and debate over whether any vaccine candidate should be granted an EUA – or final approval – without first completing Phase 3 clinical trials.

So in essence, what an EUA does is speed up the process of getting potentially useful medical products authorized for a specific use to the public during a health emergency, without the rigorous testing and subsequent scrutiny that is usually required to obtain the FDA approval, which traditionally takes years.

When the health emergency is over, “then any EUA released under that declaration will no longer remain in effect,” according to the FDA. But the manufacturer can still submit the documentation to the agency for regular approval.

The EUA hasn’t been around for that long. The process was contained in the Project Bioshield Act passed by Congress in 2004, which allowed the federal government to prepare and stockpile new “medical countermeasures” during a declared public health emergency.

And despite issuing many EUAs over the years, only one vaccine has ever received one, but in an unusual and controversial circumstance. In 1997, the Department of Defense initiated a mandatory anthrax vaccination program. Soon after, the soldiers claimed that the vaccine made them sick, so they decided and a judge suspended the program in 2003. The Department of Defense called for a UEA which then overturned the court’s ruling in 2005, so that could continue to vaccinate military personnel. – this time on a voluntary basis.

EUA during this pandemic

During the Covid-19 pandemic, the FDA granted EUAs many times to a wide range of medical products, such as ventilators; personal protective equipment, including masks; molecular and antigenic tests to diagnose Covid-19 and serological tests to search for antibodies; and also treatments, such as ilremdesivir and convalescent plasma.

An EUA can be withdrawn, as in the case of hydroxychloroquine and chloroquine. These drugs were already approved for the treatment and prevention of malaria and have shown promise against the novel coronavirus in laboratory studies. Small initial studies of Covid-19 patients added optimism and the drug was touted by President Trump. But larger studies have found that the drugs are ineffective in treating patients with Covid-19. Additionally, one of the side effects could also be potentially dangerous in people who had pre-existing heart conditions. After about two and a half months with EUA, the emergency authorization was revoked.

Many experts consider granting a UEA to a Covid-19 vaccine problematic. For one, vaccines are given to healthy people by choice, unlike drugs that are given to seriously ill patients who could die without them. So drug makers have a higher bar, so to speak, to make sure there are no unexpected side effects that make healthy people sick – and the only way to find out is in large-scale trials, such as those underway. this moment.

In a series of tweetsby Dr. Peter Hotez, professor and dean of Tropical Medicine at Baylor College of Medicine, earlier this month, noted that “EUAs involve below average or lower revisions. How can a lower or lower revision be justified for something that would be injected into tens of millions, maybe hundreds of millions of Americans? “

Additionally, Hotez pointed out that the mRNA technology used in two of the most advanced vaccines in phase 3 studies – the Moderna vaccine and the Pfizer / BioNTechvaccine – uses “a new technology that has never been authorized before. We have no history. or experience with such vaccines. Even more reasons for a full / comprehensive review. “

Hotez also raises the point that in this highly politicized climate, there is a lack of trust and confidence in the government and federal agencies. “We have seen how in 2020 the White House abused the EUA mechanism – remember the EUA for hydroxychloroquine which was revoked? Not even the White House or the HHS Department,” he tweeted.

There is also concern that the president is trying to make a vaccine available for political reasons in the run-up to the November elections.

President Trump has said multiple times that he thinks a vaccine could be available by election day. Undoubtedly, the pace of medical innovation has moved faster than ever, and human vaccine trials only began 67 days after the virus was first identified. The U.S. Centers for Disease Control and Prevention recently told public health officials to prepare to distribute a potential vaccine as early as the end of October. And FDA commissioner Dr Stephen Hahn said he would consider an EUA before phase 3 trials are completed.

However, several health government officials told CNN that the idea that a vaccine could be available to the public by November 3 is unlikely. “There is great concern about the type of political opportunity and when this is [October] the date was being chosen … and only the choice of this date, before the elections, somehow feeds those fears that the government is not being duly diligent to make sure that any vaccine is not only effective, but has few side effects. ” said Dr. Ali Khan, dean of the College of Public Health at the University of Nebraska Medical Center, and former director of the Office of Public Health Preparation at the CDC.

“So, we’re all optimistic that there are currently three vaccines in phase 3 trials – that perhaps one of these vaccines is so excellent that you don’t need to vaccinate 30,000 people to find it will work. However, the concern is that if it doesn’t. If you run a full set of these so-called Phase 3 studies, you’ll miss out on rare side effects, ”he told CNN earlier this month.

When a vaccine – or other medical product – is given to enough people, rare side effects can occur. In 1976, the government launched a hastily produced vaccine about seven months after the Ford administration was convinced that a pandemic caused by a new strain of flu was imminent.

The pandemic never materialized, but 40 million people were vaccinated as part of a mandatory program. That vaccine was later linked to a neurological disorder called Guillain-Barré syndrome, which can develop after an infection or, rarely, after vaccination with a live vaccine. The connection was never tried, but the program was interrupted.

Furthermore, in order to prove the vaccine’s effectiveness, dozens of people in the placebo group would need to be infected, while very few infections would be found in the vaccinated group of trial participants. It may take weeks, if not months, to see that difference between the two populations.

The lack of public trust and hesitation about vaccines are real. A CNN poll in August showed that 40% of Americans don’t want to get a vaccine when it becomes available, even if it’s cheap and easy to obtain. Such low uptake of the vaccine could damage the country’s ability to keep the virus in check and return to normal.

If the story is any indication, skepticism, if not total distrust, of an unapproved vaccine is nothing new. In a study published in 2009, months after the United States declared a public health emergency due to the H1N1 flu and the World Health Organization declared it a pandemic, researchers explored the public’s willingness to use a drug or vaccine with an EUA (not complete FDA approval) by examining a representative sample of more than 1,500 US adults.

They found that more than 77% of respondents would be moderately, very or extremely worried if they were offered an unapproved vaccine; 63% said they would not accept it.

But there were also other key factors that would have convinced respondents that a vaccine authorized under a UEA was safe to use. If the vaccine were administered by a public health professional, 55% of respondents say they would take it. If it came with an information sheet, just over 57% of respondents said they would receive it. And if it were administered by your own doctor, that number would have risen to 68%. Transparency is key to gaining trust.

The heads of the country’s health agencies – Alex Azar at the United States Department of Health and Human Services, Dr. Francis Collins at the National Institutes of Health, Dr. Anthony Fauci at the National Institute of Allergy and Infectious Diseases, the dr. .Stephen Hahn and Dr. Robert Redfield of the CDC – have all tried to reassure Americans that politics will not play a role when a vaccine is available.

Fauci said he believes a vaccine will likely approach the end of the year and that he would not be comfortable making a vaccine widely available unless the scientific evidence supports it. “I am not a regulator. I mean, I only deal with science. I would report science accurately, and certainly if I saw interference, I would be very disturbed and would call him,” Fauci told Jim of CNN Acosta in “The Situation Room” .

Regarding an emergency use authorization, “I would not feel comfortable with a vaccine unless it has been shown in a clinical trial to be clearly safe and effective,” Faucisaid during an interview on “Today” from NBC.

The Butifa vaccine has been shown to be safe and effective in adequate and well-controlled clinical trials, it should not be rejected until all stringent FDA clearance requirements are met, because some of the requirements cannot be generated quickly.

“Safe and effective vaccines can save lives and help contain the pandemic,” tweeted Borio. “EUA is the most appropriate regulatory mechanism for the distribution of vaccines that have been shown to be safe and effective in Phase 3 RCTs (randomized controlled trials) but have not yet met all FDA standards for authorization.”

Moncef Slaoui, chief adviser to Operation Warp Speed, the federal government’s Covid-19 vaccination program, said it “would be unethical” not to move quickly to distribute a Covid-19 vaccine if it is proven to work.

“If we know that a vaccine is 70% or 80% or 90% effective, it would be unethical to hold it back,” Slaoui said in a CNN interview on Friday.

On Tuesday, nine biopharmaceutical companies, including those that are further along in their vaccine testing programs, signed an unusual pledge to uphold “high ethical standards,” suggesting they will not seek premature government approval for Covid-19 vaccines.

They pledged to “file for emergency use approval or authorization only after demonstrating safety and efficacy through a Phase 3 clinical trial designed and conducted to meet the requirements of experienced regulatory authorities such as the FDA.”

Indeed, later that same day, AstraZeneca, one of the signatories to the pledge, said it had suspended its trials globally due to an unexplained illness in a volunteer in the UK. The drug manufacturer called the arrest “a routine action”.

“In large trials, diseases will occur by chance, but they need to be independently reviewed to verify this carefully. We are working to expedite the single event review to minimize any potential impact on the study timeline,” he said. AstraZeneca in a statement sent to CNN.

According to FDA guidance, any vaccine – whether emergency licensed or approved – must prevent disease or at least reduce severity by at least 50%.

Despite all the intrigue, it may be worth going back to the original criteria for a UEA – specifically, the clause that it is only granted when “there are no suitable alternatives approved and available”.

While most people understandably don’t want to hear it, there is a reasonable alternative, which has worked well in many places around the world, and which is to comply with basic public health measures: wear a mask, keep physical distance. , practice good hand hygiene and stay away from large crowds, especially indoors, especially indoors.

Following these rules will significantly reduce the likelihood of people getting sick and slow down the transmission of the virus. It will also buy us more time to make sure we get the evidence supporting the vaccine fully nailed.