Cuomo’s restrictions on synagogues in virus hotspots can go on 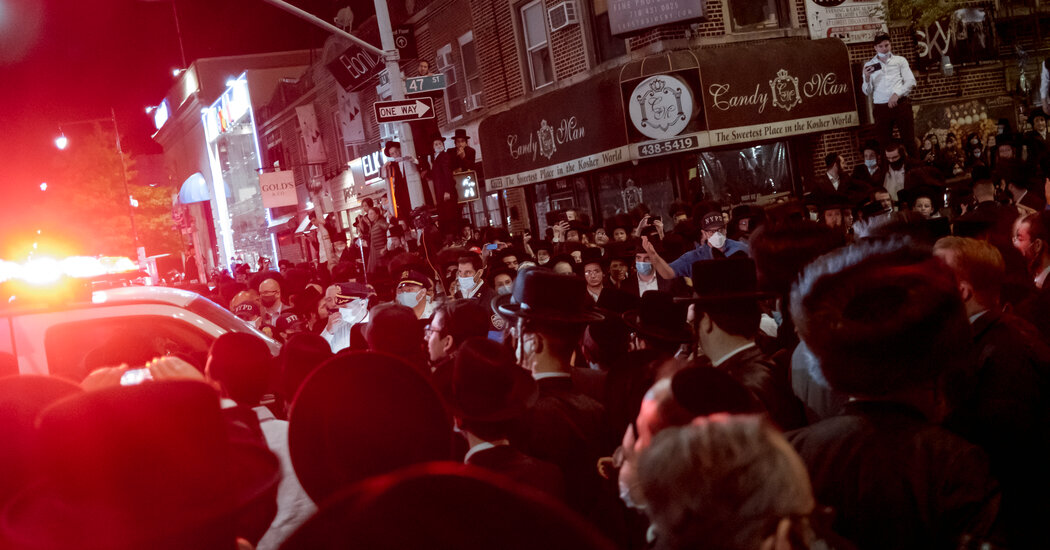 A federal judge on Friday allowed Governor Andrew M. Cuomo to move forward with new coronavirus restrictions on gatherings in synagogues and other places of worship, finding that the rules did not violate the free exercise of religion for Orthodox Jews.

The Brooklyn federal court ruling came after Agudath Israel of America, an Orthodox Jewish national organization, sued Mr. Cuomo this week for its latest executive order describing a series of new restrictions for dealing with cases of coronavirus on the rise in neighborhoods with large populations of Orthodox Jews.

After an emergency hearing on Friday, the judge refused to temporarily block Mr. Cuomo’s executive order before three Jewish holidays over the weekend. He said he sympathized with the impact of the order on the Orthodox Jewish community, but rejected the argument that Mr. Cuomo had unconstitutionally targeted a religious minority.

“How can we ignore the state’s irresistible interest in protecting the health and life of all New Yorkers?” said judge Kiyo A. Matsumoto of the Brooklyn Federal District Court.

When he announced the executive order, Mr. Cuomo set new capacity limits for places of worship. In areas with the highest rates of infection, places of worship would be limited to 25% capacity or a maximum of 10 people, while those in a less severe hot spot could have 50% capacity.

Lawyers for Agudath Israel, an umbrella group with affiliated synagogues across the country, had argued that the new rules were unconstitutional because they prevented Orthodox Jews from practicing their religion. The Roman Catholic diocese of Brooklyn also filed a similar lawsuit against Mr. Cuomo on Thursday.

The judge’s decision means that Mr. Cuomo can impose the new restrictions as the case proceeds.

The lawsuits underscored the challenge facing New York officials as they try to fight a second wave of virus infections and tackle a crisis at the intersection of public health, religion and politics. Some areas of New York City had infection rates of around 8 percent, officials said, far above the 1 percent rate for the rest of the city.

The restrictions were meant to curb worryingly Coronavirus outbreaks in Brooklyn, Queens and the northern suburbs of New York City, including several areas with large Orthodox populations. In recent months, Orthodox synagogues have become scenes of large gatherings of faithful grouped together, many of whom wore no headgear.

“This is the last thing I want to do,” Mr. Cuomo said earlier this week. “It’s a difficult conversation and you’re right on the line of government intrusion into religion.”

State lawyers said the restrictions did not unfairly target the Orthodox Jewish community, saying it was not a violation of the Constitution to recognize that religious gatherings have a higher risk of spreading the virus.

In neighborhoods with the highest rates of infection, schools and non-essential businesses have also been closed by executive order.

“First Amendment protections do not require the government to ignore reality and common sense,” a state lawyer wrote in a court statement Friday.

The lawsuits followed mounting tensions over the new blockades, which this week prompted ultra-Orthodox Jews in Brooklyn’s Borough Park neighborhood to protest, light up their masks and attack at least three people, including two local men accused of treachery to the Hasidic community.

The order of the governor it will affect hundreds of synagogues and tens of thousands of Orthodox Jews in New York, according to the cause. Plaintiffs said that instead of targeting places of worship, Mr. Cuomo should focus on enforcing social distancing and other Covid-19 restrictions, including in bars and restaurants.

The rabbis in the lawsuit said their synagogues had already implemented strict protocols in accordance with previous state mandates, including dividing services into separate meetings and requiring worshipers to wear a mask.

“There is simply no justification for the unjustified, unnecessary and unconstitutional restrictions imposed this week,” Agudath Israel’s lawyers wrote.