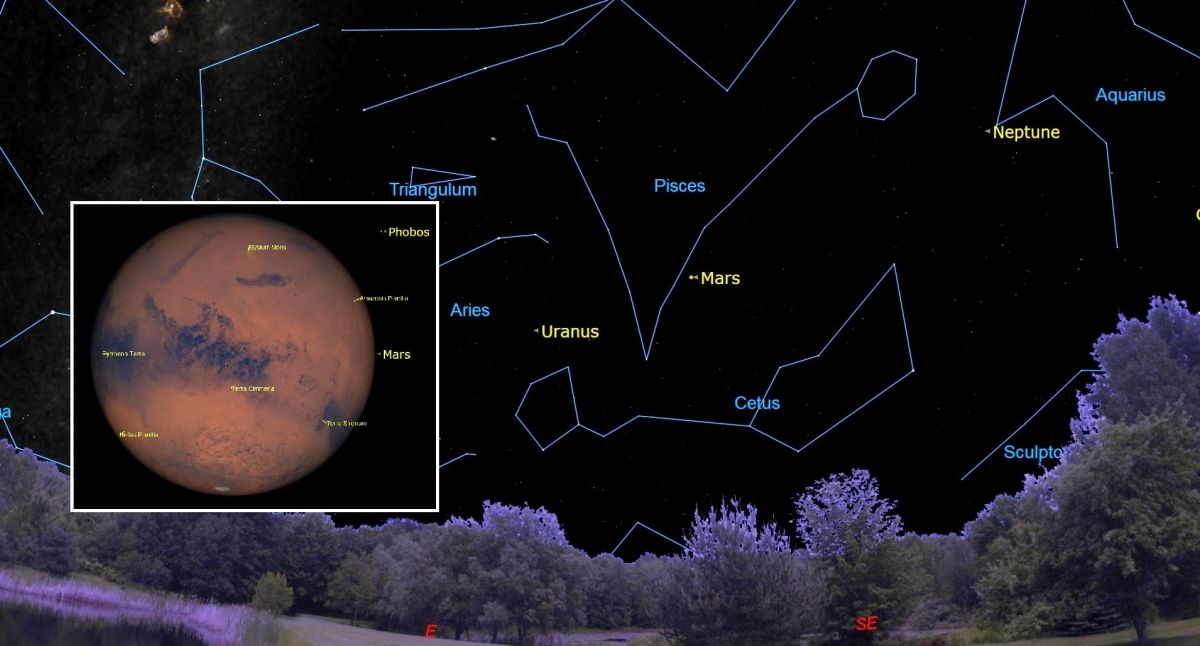 After months of waiting, Mars is finally taking center stage in the night sky for sky watchers around the world!

On Tuesday morning (October 6), the Red Planet was closer to Earth than it will be at any time until 2035. Next Tuesday, October 13, Mars will officially reach opposition and maximum brightness in the sky.

Meanwhile, virtually any size of the telescope will be able to show you the ruby ​​disc of Mars – and perhaps some surface features! Advanced software applications like Starry Night 8 are perfect for demonstrating what’s happening, where to see Mars in your sky, and what details to look for.

Surprising photos: the “Blood Moon” eclipse and the 2018 opposition from Mars

What is Mars doing?

If the planets were positioned on the same starting line on an imaginary track around the sun (as it will be on Tuesday, in opposition), when Earth returned after one turn, Mars slowpoke would be out of sight on the opposite side of the sun. When the Earth completes its second turn, Mars will return to the same side as the Sun and a little further along the track than us. To be precise, the Earth passes Mars every two years and 50 days.

There is an extra twist in all of this. Our orbit is quite circular, while Mars’s orbit is much more elliptical. Its distance from the sun varies quite – between 128.4 and 154.8 million miles (or 206.7 and 249.2 million kilometers) – a variation of about 20%. Every 15 years or so, geometry calculates that we pass Mars in the meantime we are close to aphelion (our maximum distance from the sun) and Mars it is close to perihelion (its minimum distance from the sun). When that happens, our two planets are much closer to each other. It happened in July 2018. This month’s meeting is almost as close and won’t be repeated until September 2035, when Mars is near its perihelion point in opposition.

Planets are lowest in the sky during the summer, medium-high in the spring and fall, and highest in the winter. As this opposition is happening during the fall, Mars will rise relatively high in the sky – about 50 degrees of elevation for mid-north latitude observers. It is ideal for telescope viewing. In July 2018, Mars rose to just about 21 degrees above the southern horizon, too low for a clear view.

You can demonstrate the relative positions of the planets using Starry Night. Start the inner solar system simulation in the Applications Favorites library, then tilt the view to look at the solar system from above. By setting the date to October 13, 2020 and going back and forth one day at a time, you can see how the alignment of the planets varies. You can also view the oppositions of 27 July 2018 and 16 September 2020 and others less favorable.

This year, Earth and Mars meet about two months after Mars passed perihelion. At this moment the two planets are positioned in the area where the distance between their orbits is widening. For this reason, Mars was closer to Earth on October 5-6, but will be aligned with Earth and the Sun in opposition, a full week later.

During the early hours of Tuesday, October 6, Earth and Mars were only 38.57 million miles apart. That’s 62.07 million km, 0.415 astronomical units (1 AU is the average Earth-Sun distance), or 3.45 light minutes away from Earth. Seen in a telescope, the maximum apparent diameter of the disk of Mars peaked at 22.6 arc seconds. (For comparison, Jupiter’s disk spans about 44 arc seconds.)

Searching for Mars in the sky

Mars is already brighter than Jupiter in the evening sky. This week, the very bright, reddish-colored planet will rise in the east before 7pm. in your local time zone. It will reach more than a third of the southeastern sky by late evening, then rise to just over half of the southern sky by 2am local time and set in the west after sunrise.

As Earth is passing between Mars and the Sun now, Mars is moving retrograde, making the planet appear to travel backward (westward) from the narrow “V” of the modest stars at the bottom of the constellation Pisces, Pisces. But you won’t see that movement unless you carefully note the positions of Mars and the surrounding stars for several nights.

Mars will be easy to spot in the sky on any clear night for weeks to come. It will rise approximately 5 minutes earlier each night, then slowly move west and remain observable until the end of May 2021! As it does so, the Earth will move away from it, causing a drastic reduction in the size of the disk and in the visual brightness of Mars after the opposition night, but it will also become a better position for evening observation. In mid-northern latitudes, the planet will reach its maximum height above the southern horizon several hours earlier in the month than in early October.

Viewing Mars in a telescope

With good binoculars you may be able to make out the small round disk of Mars, but if you can get your hands on a telescope of any size, you will see so much more! Since Mars’ rotation period (its day) is about 38 minutes longer than Earth’s, by observing the planet for many nights you can see different parts of the surface of Mars.

In fact, it would take 41 nights of observation at the same time in the evening to see the entire globe of Mars rotate once. But as we have around 10 hours of darkness during early October nights, you may want to check into the planet at 9pm. and again at 6am local time, and you see far more than half of his globe in one!

The Earth-facing hemisphere of Mars from October 12-13 will show its bright southern polar cap, visible as a small bright white spot near the planet’s edge. Look for the dark regions of Tyrrhena Terra, Cimmeria Terra, and Sirenum Terra, and the lighter-toned regions of Amazonis Planitia and Eylsium. After midnight local time, the very dark and wedge-shaped region of Syrtis Major Planum, the dark regions of Tyrrhena Terra and Sinus Sibaeus, and the lighter toned Hellas Planitia region will rotate into view.

That vision of Mars will remain more or less the same throughout the week. (Don’t forget that your telescope will likely flip Mars upside down and / or mirror it left to right.) Owners of larger telescopes can also try to see the two small moons of Mars, Phobos and Deimos by hiding bright Mars out of range. view of the eyepiece.

You can use Starry Night to preview what the planet will show through a telescope. Set the date and time you plan to observe, then right-click and zoom in on Mars. Starry Night includes several skins (or surface images / models) with which you can overlay the planet. I prefer to right click on Mars and select the Viking color mosaic. To identify marks, you can right-click and launch the Markers and Contours dialog. Scroll and select the regions to label or type the ones I mentioned above in the Filter box: and put a check mark next to them. To match the way the telescope flips the view, open the Options / Flip menu and choose the mode that matches what you see in the eyepiece.

Here are some observation tips. When viewing something in a telescope, be patient. Watch continuously and wait for moments of crisp clarity as the air calms down. The color filters supplied with some telescopes and eyepiece kits can enhance Mars, as follows:

If you find that Mars appears too bright in your telescope, try using a moon filter to reduce glare or reduce the telescope aperture by using the lunar lens cap provided by most telescopes.

Mars will look great on any clear night, so take every opportunity to see this rare event. And relax – you have several weeks to see the red planet at its best. If you take pictures of Mars on your camera or smartphone, be sure to share them with Space.com. In the meantime, keep looking up!

Editor’s Note: Chris Vaughan is an astronomy education and public outreach specialist at AstroGeo, a member of the Royal Astronomical Society of Canada and operator of the historic 74-inch (1.88-meter) David Dunlap Observatory telescope. You can contact him by email and follow him on Twitter @astrogeoguy, as well as on Facebook and Instagram.