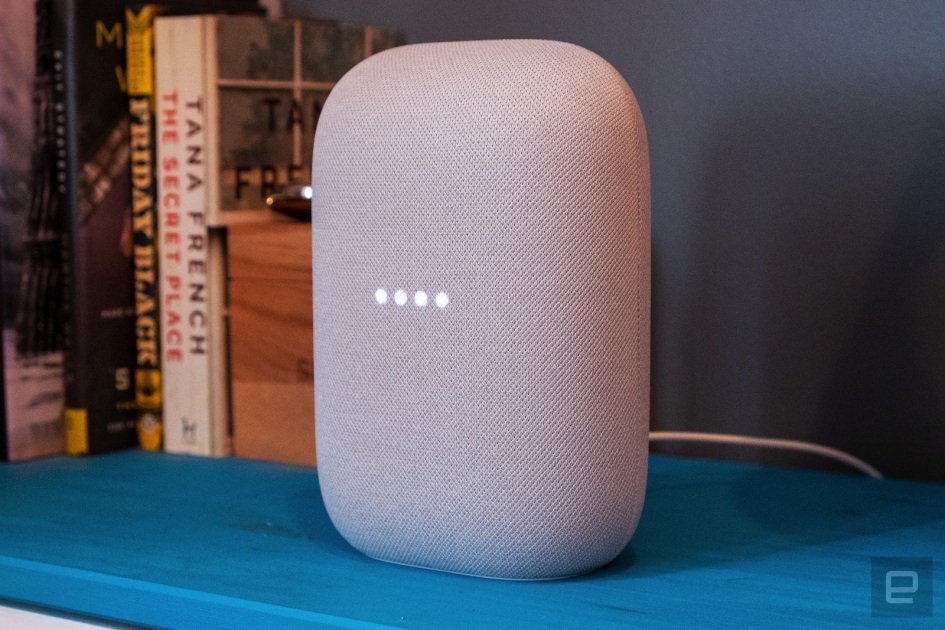 My first impression after taking Nest Audio out of the box was “wow, this thing is tiny”. From the pictures and videos, it looked like a smaller version of Home Max, which is still true now that I’ve seen it in real life. But it’s less than 7 inches tall and only 3 inches thick – unlike the Max, Nest Audio will be able to fit just about anywhere you want to put it. Like all current Google speakers, it’s covered in a transparent audio cloth available in five colors (I chose the boring but versatile “Chalk”

; option). The front has four LEDs that activate when you talk to the speaker and the back contains a power port and mute switch. Finally, there are invisible touch-sensitive buttons at the top for playing or pausing audio and adjusting the volume.

From a feature and configuration standpoint, Nest Audio is essentially identical to Nest Mini and other Google-branded smart speakers. Plug it in and the Google Home smartphone app will walk you through a setup process that links your Google account and lets you choose your favorite music services. Once done, you can ask Google to play whatever you like or stream songs to speakers from various apps.

Nest Audio has all the same features as the cheaper Nest Mini, so what I really care about here is the quality of the music. At first, the small size made me question how good it really could be, and this was confirmed in my initial tests. It’s both a huge upgrade over a small speaker like the Mini or Echo Dot, but also a bit of a letdown as Google is selling it as an audio-first device. Specifically, I found the music a bit fuzzy, with no defined highs.

The good news is that it’s quite noisy and can fill small to medium-sized rooms with sound, although you’ll probably have to turn the volume up to more than 50 percent. Fortunately, the Nest Audio holds up well at higher volumes, without any noticeable distortion. And as time went on, the fuzzy quality I initially noticed seemed to diminish – it could be just because I got used to the speaker characteristics, or it could be that Nest Audio’s auto-tune feature improved the audio quality the more I listened.

Can Evernote come back to the fore?

Should you stack bounties in “Destiny 2” to gain power beyond the light?