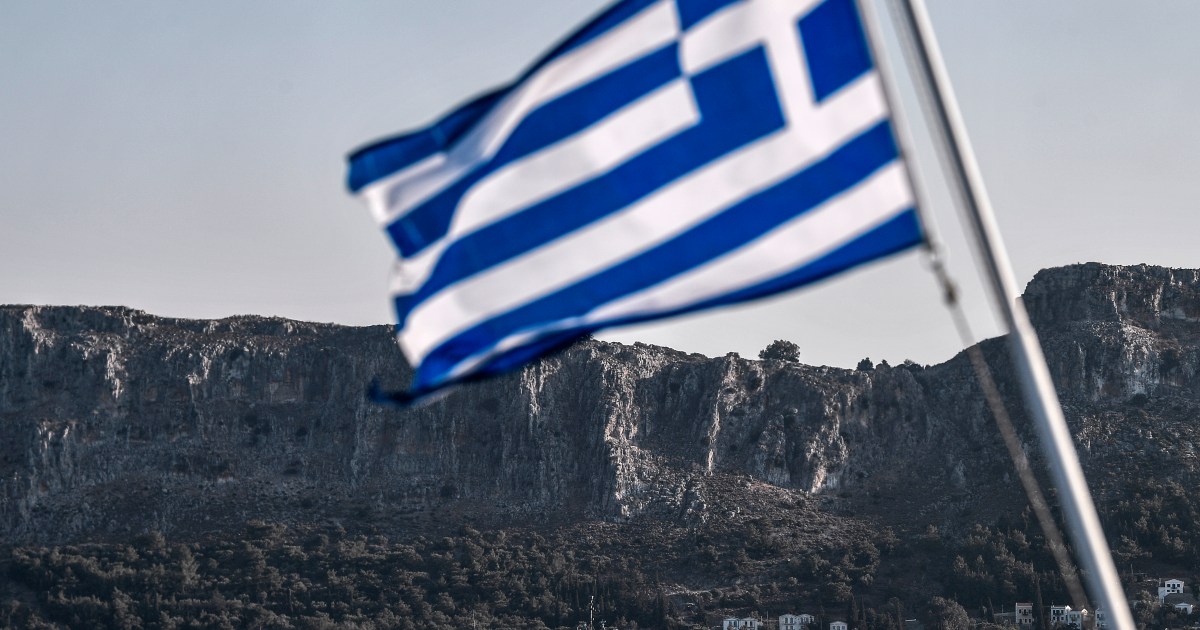 Turkey’s deployment last month of a seismic research vessel accompanied by warships in the eastern Mediterranean near the island of Kastellorizo ​​triggered the current crisis with Greece.

On Sunday, Greece condemned a mural of the Greek flag on the island of Kastelorizo, accused of Turkish citizens, of vandalism a day before US Secretary of State Mike Pompeo arrived in the country.

The tiny Greek island, just 2km (1.2 miles) from the Turkish coast, sits in disputed waters that have been the source of mounting tensions between Turkey and Greece.

At the heart of the latest crisis is Turkey’s deployment last month of a seismic research vessel accompanied by warships in the eastern Mediterranean near Kastellorizo, despite repeated protests from Athens and the European Union .

7;s authorities on Saturday found red paint smeared on a large mural of the Greek flag, painted on a hill near its port.

“We unequivocally condemn the desecration of the Greek flag yesterday in Kastellorizo. Unacceptable actions such as these aim to undermine the prospects of easing tensions between the two countries,” the Greek Foreign Ministry said in a statement.

“We expect the immediate conviction and prompt investigation of the incident by the Turkish authorities, so that those responsible are brought to justice.”

There have also been reports of a drone flying over the island on Saturday playing Turkish anthems.

Turkish network Karar TV showed drone video footage of the defaced painting, while Greek media reported that the network attributed the vandalism to “Turkish engineers” who threw “100 kilos of red paint on the Greek flag”.

On 10 August, Turkish navy ships escorted an exploration vessel into the waters south of Kastellorizo.

Four days earlier, Athens had enraged Ankara after signing an agreement with Cairo over their respective maritime economic zones, claiming that the waters around the island are under Greek sovereignty.

Under pressure from European allies and NATO, Turkey withdrew the research vessel in a move hailed as a “positive first step” by the Greek prime minister.

The tone has recently softened with Greece and Turkey, both NATO members, who have agreed to engage in exploratory talks on the dispute.

US Secretary of State Pompeo is expected to visit Greece on Monday in a strong sign of support. A US official said it will focus on building relations with Greece, but will also offer support for diplomacy with Turkey.

Domenica Pompeo had a conversation about tensions in the Eastern Mediterranean with NATO Secretary General Jens Stoltenberg.

“I am delighted to speak with Secretary General @NATO @jensstoltenberg today to discuss easing the situation in the Eastern Mediterranean and reiterate the importance of NATO Alliance unity,” Pompeo tweeted on his way to Greece.

Relations between NATO members Greece and Turkey, ever strained, have further deteriorated this year due to longstanding disputes, including maritime borders and energy rights. France has been explicit in its support for Greece and the latter’s call for EU sanctions.

Pompeo is on the first leg of a five-day trip to Europe, which includes visits to Italy, the Vatican and Croatia. It is the first visit by a US secretary of state to Thessaloniki.

According to State Department briefings, Pompeo will meet with Greek Prime Minister Kyriakos Mitsotakis and Foreign Minister Nikos Dendias to renew the two countries’ shared commitment to promoting security, peace and prosperity in the Eastern Mediterranean and celebrate the strongest relationship between the United States and Greece over the decades.

On Monday, Pompeo will meet Dendias, sign a bilateral science and technology agreement, as well as host business leaders from the energy sector for a discussion to highlight energy diversification and infrastructure projects in Greece. He will also join members of the city’s Jewish community to commemorate Yom Kippur.

Pompeo will leave later Monday to visit the NATO naval base in Souda Bay. On Tuesday he will visit the facilities and have lunch with Mitsotakis at the latter’s nearby residence. The two will issue a joint statement.

The US secretary of state will leave Greece for Rome on Wednesday.