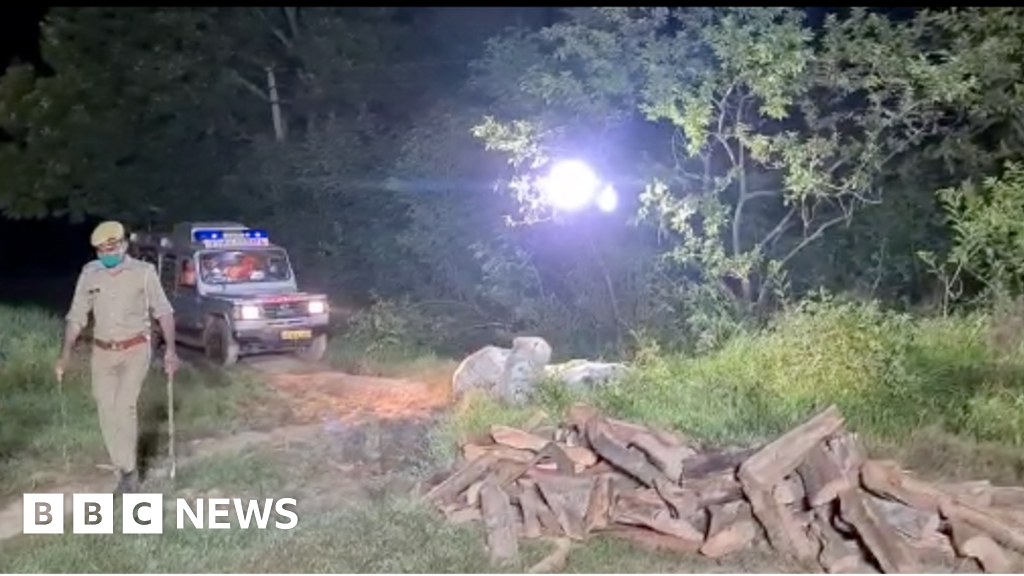 The family of a Dalit woman (formerly untouchable) who died after being gang raped accused police officials of cremating her body without their permission.

The nineteen year old was allegedly raped by four upper caste men in the district of Hathras, in northern India.

She was badly injured on Tuesday and died in a Delhi hospital after fighting for her life for two weeks.

Activists say the police must explain why they made the “inhuman decision”.

His alleged attackers were arrested and an expedited tribunal was set up to look into the case.

Local reporter Abhishek Mathur, who witnessed the cremation from afar, told the BBC that the police kept his family and the media away from the funeral pyre.

His body was taken to their village in Uttar Pradesh state around midnight. The victim’s brother said police officers were pressuring the family to cremate her immediately.

“When we refused, they took the body in an ambulance and cremated it,” he said.

A senior district administration official, however, denied the allegation, saying the family’s consent was taken.

Mr. Mathur said the victim’s mother wanted to take her body home for rituals before the last rites, but her request was denied.

“The police had formed a human chain to prevent the protesting crowd, family and the media from approaching the cremation site,” he added.

The victim’s brother said some police officers were rude to them.

“They took the body away without our permission, without my parents’ permission and cremated it. We didn’t even get to see it one last time,” he said.

In India, where rape is reported every 15 minutes, most assaults don’t even make the news.

But then comes a case that stands out for its brutality and upsets the nation’s conscience.

The gang rape of the 19-year-old Dalit teenager is one such case that has caused widespread indignation.

But in this case, it is not just the attackers who have committed a heinous crime. The authorities also treated his family with unworthiness, before and after his death.

Following the outrage, Hathras police denied reports that they would cremate her body without the family’s consent, but many local reporters disputed their story.

Videos shared widely on news TV channels and social media show his distraught family and villagers attempting to reclaim his body as the police ambulance arrived in the village.

In one video, her mother is seen crying with her head on the hood of the car. In another, she is sitting on the street in front of the ambulance, crying and beating her chest.

She repeatedly heard officials pleading with her to deliver the body to her so she could take it home one last time – and perform some rituals.

The victim’s father is overheard telling reporters that cremations are never carried out overnight. But the police continued with the 2:30 am funeral.

The congressional opposition party called the hasty cremation “a serious violation of human rights”. On social media, many have called it “illegal” and “immoral”.

Police officials have not made any statements on the allegations.

His death sparked anger across the country. Dalit activists have closed the main market in Hathras and are calling for action against police officers.

They are also angry at the way the police handled the investigation.

The victim’s brother said no arrests were made in the first 10 days following the incident. “She was considered dead. She fought for her life for 14 days,” he said.

Several opposition leaders have condemned the incident calling it “offensive and unfair”.

Dalits are some of India’s most oppressed citizens due to a ruthless Hindu caste hierarchy that condemns them to the bottom of the ladder. Despite the laws that protect them, discrimination remains a daily reality for the Dalit population, which is estimated to be around 200 million.

On Twitter, the victim’s death is among the top trends of discussion, with many calling it the Forgotten Nirbhaya, a reference to the gang rape and murder of a woman in Delhi in 2012 that shocked the world.

The 23-year-old physiotherapy student was called Nirbhaya – the fearless one – by the press as she couldn’t be named under Indian law.

Rape and sexual assault have been in the spotlight in India since the 2012 Delhi attack, which led to massive protests and changes to the country’s rape laws. But there has been no sign of a decline in crimes against women and girls.