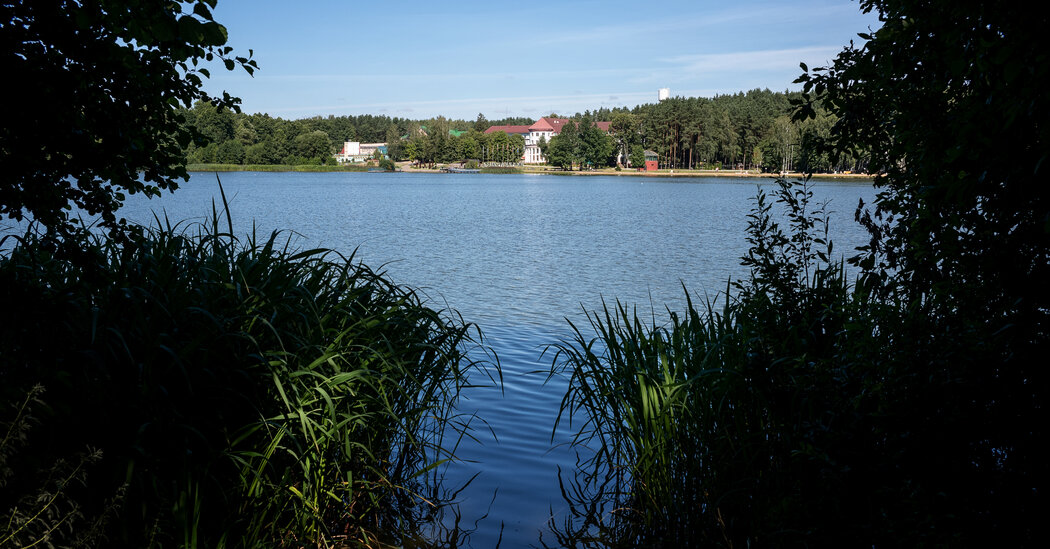 ZHDANOVICHI, Belarus – Members of the Wagner Group, an obscure Russian mercenary force linked to an associate of President Vladimir V. Putin, have left their traces around the world. They fought in support of pro-Russian separatists in eastern Ukraine; he helped overturn the Syrian civil war in favor of President Bashar al-Assad and fought on the side of a Kremlin-backed warlord in Libya.

In late July, they popped up in the most unlikely place ever: an austere Soviet-era sanatorium on a lake outside the sleepy capital of Belarus, a Russian ally completely devoid of warring militias, armed checkpoints, and other signs of civil wars. . which usually attract Russian mercenaries.

The muscular Russian men, 32 in all, were spotted as soon as they checked in, occupying rooms on the second floor of a concrete block in the far corner of the resort and spa.

Unlike other Russian clients, they kept themselves to themselves, showing little interest in a late night disco, which immediately struck the D.J., Veronika Step, as odd. Two of them stopped at the club to have a look but left quickly, he said.

The men, Ms. Step recalled, were so unsociable that she and her colleagues started joking that perhaps they should have called the police “to find out what’s wrong with them.”

What happened next, however, was even stranger: a heavily armed special unit of Belarus’ top security agency, still called K.G.B., stormed the resort late at night, dragging the Russians away in handcuffs.

Shortly thereafter, Belarusian state television shared footage of the raid, showing a number of tattooed and burly Russians lying face down on the beds and floor in boxers at the resort. Taken away in unmarked vans to a police station, they were forced to kneel in front of a wall for 22 hours, according to their interview with Russian state media.

President Aleksandr G. Lukashenko of Belarus, who was facing a presidential election in less than two weeks, called an emergency meeting of his senior security officials, saying the Russians were mercenaries with “dirty targets”. Speaking at the meeting, Valery Vakulchik, head of the K.G.B. at the time, confirmed that the Russians belonged to the Wagner group.

Then, just 10 days before the vote on 9 August, the Belarusian investigators accused the Russians of plotting to stop the elections.

“Russia is afraid of losing us,” Lukashenko said, accusing the Kremlin of trying to “suffocate” Belarus.

Russia, long accustomed to Mr. Lukashenko’s eccentric ways but shocked by his sudden outburst of open hostility, offered its bizarre explanation of what the men were doing at the sanatorium. The Russian ambassador in Minsk said the men had simply missed a flight at the airport and needed a place to stay before taking another, but there was no explanation as to why they had chosen rooms in a resort on the other side of town, away from the airport.

For sanatorium staff, the news that their guests were part of a secret Russian military operation to wreak havoc only compounded their own confusion.

Yelena, a housekeeper in the building where the the men stayed, she said she was surprised to find that the Russians had something to do with the military.

“They didn’t look like fighters, only a few looked heavily built,” said Yelena, who declined to give her surname for fear of repercussions from management. “They were doing well, very culturally, they went to the outdoor gym,” he said. “Maybe they underwent medical treatment, took a bath.”

The resort – called Belorusochka, meaning “a Belarusian woman” – seemed like an odd choice, more of a time machine for Soviet nostalgics than a place anyone interested in planning a coup would ever stay.

Standing on the shore of a picturesque reservoir, the resort is surrounded by a fence and looks more like a prison camp than a spa. In line with the penitentiary motive, every activity is regulated by strict rules and by the iron will of Svyatoslav F. Savitsky, the chief doctor, who wanders the grounds in his S.U.V., always looking for suspicious activities.

“I haven’t been to a resort like this since I was 12,” said Olga Matuzo, a 42-year-old Russian who had traveled 1,500 miles from the Russian city of Chelyabinsk with her ailing mother. “Immediately after arriving in the reception area you feel like you are in the Soviet Union.”

She said she definitely wouldn’t come back, complaining that the staff were surly and the bed in her room collapsed after she sat on it. Even his mother, who knew the Soviet standards of hospitality, was appalled by the conditions, she said.

Arrested Russians are also unlikely to return, who, Belarus authorities now insist, never lived up to any harm in Belarus, but were the victims of an elaborate plot organized by Ukrainian intelligence in league with the United States.

According to this new version of what happened, the men were lured to Belarus by Ukrainian spies, who planned to hijack their plane as it flew over Ukraine and have the men arrested for their fighting role in eastern Ukraine.

The fact that Belarus has changed its history so dramatically is a measure of how quickly the country’s strong leader, Lukashenko, has reevaluated his political interests.

Barraged with during the street protests after claiming a landslide victory on August 9, Mr. Lukashenko abruptly dropped his charges against Russia and began calling for help in Moscow. He called Mr. Putin four times by phone and sent his eldest son, Viktor, to the prison that holds the Russians to make sure they were well fed.

On August 14, after failing to curb a first round of street protests with a frenzy of police violence, he ordered the release of the Wagner mercenaries and allowed them to return to Russia. All charges against them were dropped. The protests continued to consume the country, with tens of thousands of protesters in Minsk and dozens gathered by the security services on Sunday.

Upon the mercenaries’ return to Russia, many of them appeared on Russian television, claiming they had no ties to the Wagner Group and had simply stopped in Belarus en route to Venezuela, where they had jobs lined up to oversee a Russian facility. unknown. Shortly after, the K.G.B. The chief, who presided over their arrest, was removed and replaced with a new security chief considered friendlier to Moscow.

The spa would like to forget the whole thing. Anastasia G. Bychko, the head of the marketing department, declined to talk about the mercenaries but simmered with enthusiasm about everything her sanatorium has to offer. “Our main attraction is the wide range of medical services we can offer,” he said, adding that first-time guests are so impressed that “they always come back.”

Ms. Step, the D.J. Resort nightclub, hopes the Russian men’s experience won’t deter others from visiting. Most of the guests, she said, are female, so the place could do with more male visitors. To try to correct the gender imbalance, he told guards at the entrance checkpoint that every male guest who enters “should be rewarded with a bottle of vodka.”