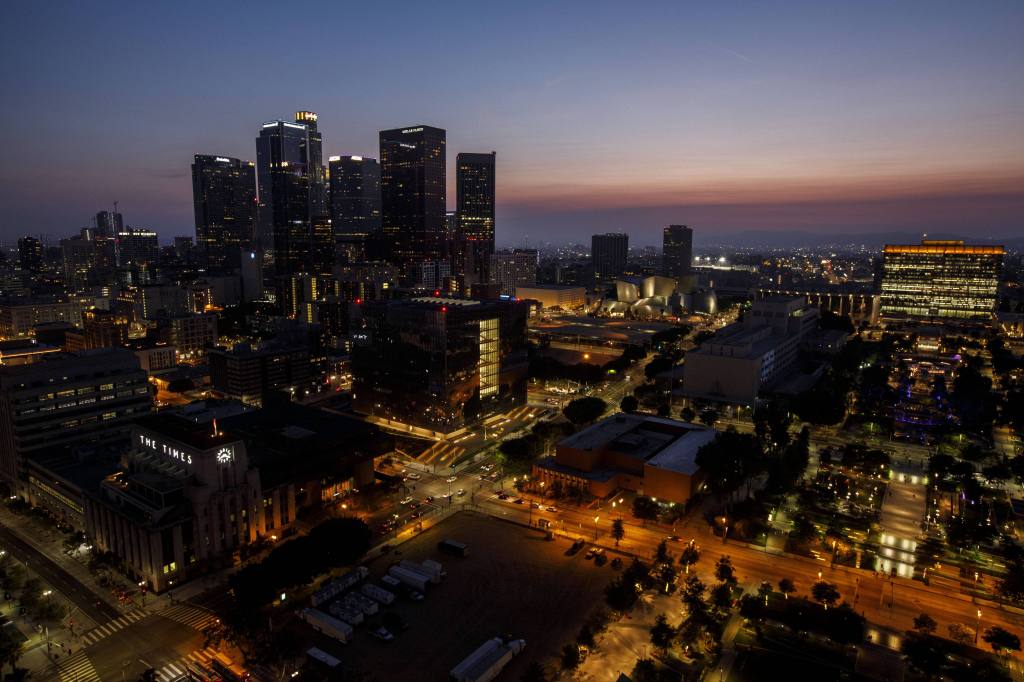 Los Angeles County is at the most restrictive, or “purple,” level of California’s four-tier virus monitoring roadmap. The county already has a low enough average seven-day test positive rate – around 3.2% – to move to a less restrictive level, but the average number of new cases is still too high, currently averaging 8.1 cases per 100,000 residents. The state threshold for passing to the less restrictive “red” level is 7 cases per 100,000.

NEW: California is launching a blueprint for a safer economy.

Your county will be assigned a color based on:
̵

Your color determines how businesses can operate in your county.

Ferrer said numbers across all categories have been trending down over the past six weeks, following a peak recorded after the July 4th holiday weekend.

“If we don’t see an increase in activity-associated cases and hospitalizations during Labor Day and continue to reduce our community transmission rate in the weeks to come, we could enter Level 2, which is a less restrictive level, sometimes in October, “Ferrer said.

This came after Ferrer caused a stir with comments last week on a conference call with educators.

“We do not realistically anticipate that we will move to either level [red] or to reopen our K-through-12 schools at least during, at least until after the election, after, you know, early November, “Ferrer said during the call, a recording of which was first obtained and broadcast by the KFI radio.

Taken through that lens, Ferrer’s latest statement seems like a surprising turnaround.

Health officials have repeatedly said they will no longer consider reopening operations in the county until at least the end of September, after determining whether virus cases and hospitalizations increase after the Labor Day holiday weekend, as they did after the Memorial Day and July 4th.

If the county gets an average number of new cases of less than 7 per 100,000 residents and maintains that level for two weeks, L.A. will be able to pass to the “red” level of the state. This would allow for the reopening of more businesses, potentially including cinemas and gyms, as well as school campuses for in-person learning.

Ferrer said the county is now seeing its average test positive rate lower than the pandemic.

“Last week, we saw the lowest positivity rate to date, at around 3.4%,” he said. “This means that nearly 97% of the tests people have done for COVID-19 have come back negative. Just a month ago, in mid-August, this rate was around 5%. So we’re happy to see the progress we’ve made. and we sincerely hope that this number will continue to decline. “

Of course, county test numbers are also down.

County Health Services Director Dr. Christina Ghaly said the overall number of tests in the past week has declined, partly due to the closure of some testing centers due to poor air quality caused by the fires. of the region. He said some test sites have two-thirds of their dating spaces available.

The daily number of cases dropped nearly half from a high of more than 20,000 tests per day in early July to a 7-day daily average of 9,772 on Wednesdays.

Ferrer again warned that the impact of the Labor Day holiday weekend has yet to be confirmed in case numbers, as the virus has a 14-day incubation period. He also said the upcoming fall and winter holidays, including the start of Rosh Hashanah this weekend, could lead to setbacks if people become relaxed about social distancing and other preventative measures.

“The autumn and winter months are filled with special moments that we can’t wait to experience,” he said. “There are many secular and religious holidays that we usually celebrate by spending time with our friends and extended family members. And the pandemic has been difficult and frustrating in many ways, including putting limits on how we can celebrate safely. all of us thinking now about how we might want to change our plans so that we can share the joy of the holidays while reducing the risk of transmitting a dangerous and sometimes deadly virus. “

Ghaly urged people to get the flu shot, noting that as flu season approaches, people who contract both the flu and COVID-19 could be susceptible to serious illness.

The county reported 31 coronavirus-related deaths on Wednesday, although one of those deaths was actually announced Tuesday by health officials in Long Beach. Long Beach announced two additional deaths Wednesday afternoon. The total death toll in the county was 6,305 as of Wednesday.

The county also announced 1,148 recently confirmed cases, while Long Beach added 40 cases and Pasadena reported six, bringing the cumulative total since the start of the pandemic to 256,194.

There were 804 people hospitalized due to COVID-19 in the county, a slight increase from Tuesday. Ghaly noted that the strong downward trend seen in hospitalizations over the past month appears to have slowed or stabilized. But hospitalization numbers have remained at dramatically lower levels than they were a month ago.

The City News Service contributed to this report.

According to wildlife experts, half a million sharks could be killed in an attempt to produce the Covid vaccine