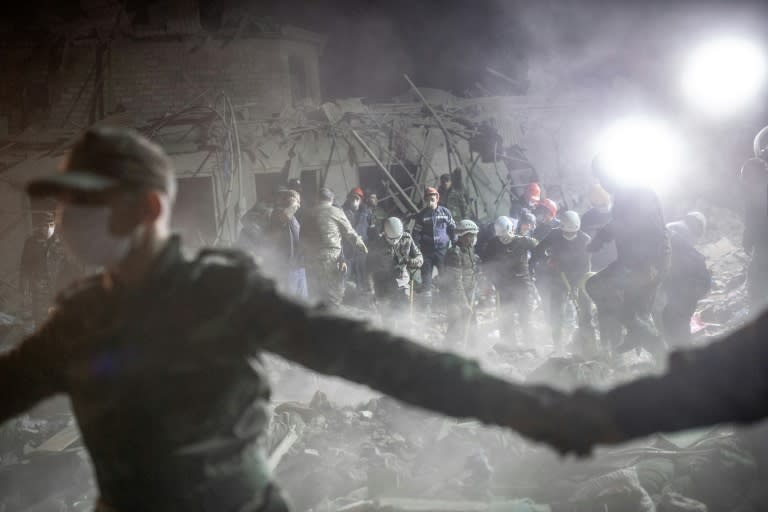 A missile strike leveled a row of houses in Azerbaijan’s second city, Ganja, on Saturday, killing and seriously injuring people in their sleep in a sharp escalation of the Nagorno-Karabakh conflict.

The attack in the early hours, which saw a second missile hit another part of Ganja and a third reach the nearby strategic city of Mingecevir, occurred just hours after Azerbaijani forces bombed Stepanakert, capital of the Armenian separatist ethical region .

There was no first official information on the toll of any of the attacks, but AFP reporters in Ganja saw a rescue team remove black bags containing body parts from the scene.

The escalation of violence further weakens international efforts to calm a resurgence of fighting between Christian Armenians and Muslim Azeri before it attracts regional powers from Russia and Turkey.

An AFP team in Ganja saw rows of houses reduced to rubble by the strike, which shattered walls and ripped the roofs of buildings in surrounding streets.

People ran outside in shock and tears, stumbling through muddy alleys in slippers, some wearing bathrobes and pajamas.

A witness said he saw rescuers pick up a small child, two women and four men from the debris in the minutes immediately following the strike.

“We were sleeping. The children were watching TV,”

“All the houses around here are destroyed. Many people are under the rubble. Some are dead, others are injured.”

The attack came just six days after a missile hit another residential part of the city of more than 300,000 people, killing 10 civilians.

Hikmat Hajiyev, assistant to Azerbaijani president Ilham Aliyev, tweeted that according to “the first information, more than 20 houses were destroyed on Saturday”.

Rescuers periodically asked for silence so that they could detect the sounds of the survivors as the hours went by, pulling passports, keys, bracelets and clothing from the debris.

They called sniffer dogs and watered the suffocating columns of dust with the hoses of a fire truck.

“One woman was missing her feet. Someone else was missing an arm at the elbow,” said Elmir Shirinzaday, 26.

AFP then saw three other people being taken away on a stretcher, although it was unclear whether they were alive or dead.

Around the same time in the city of Mingecevir, an hour’s drive north of Ganja, AFP felt the impact of a huge explosion that shook buildings.

Mingecevir is protected by a missile defense system because it houses a strategic dam, and it was not immediately clear whether the missile was destroyed in the air or had an impact.

The defense ministry said Mingecevir was “under fire” but did not provide any other immediate details.

An Azerbaijani official said a second missile hit a separate industrial district of Ganja around the same time.

No immediate details were known about that second attack.

The ten-year Nagorno-Karabakh conflict broke out on September 27 under very controversial circumstances and has so far killed more than 700 people, including nearly 80 civilians.

The western mountainous region of Azerbaijan has remained under ethnic Armenian separatist control since a 1994 ceasefire ended a brutal war that killed 30,000 people.

But Armenia, which supports Nagorno-Karabakh but does not recognize its independence, has admitted that Azerbaijani forces have made significant progress on the front in the past week.

The AFP on Friday was taken by the Azerbaijani army to a recaptured settlement in the southern section of the conflict zone near the Iranian border.

Officials said they last checked the Jabrayil settlement, which includes strategic highlands overlooking a fertile valley, during the post-Soviet war.

The current escalation is the deadliest and longest since that six-year conflict.

The bombing of Stepanakert and the attacks on Ganja followed Wednesday a joint appeal by Russian President Vladimir Putin and Turkish President Recep Tayyip Erdogan to “end the bloodshed as soon as possible”.