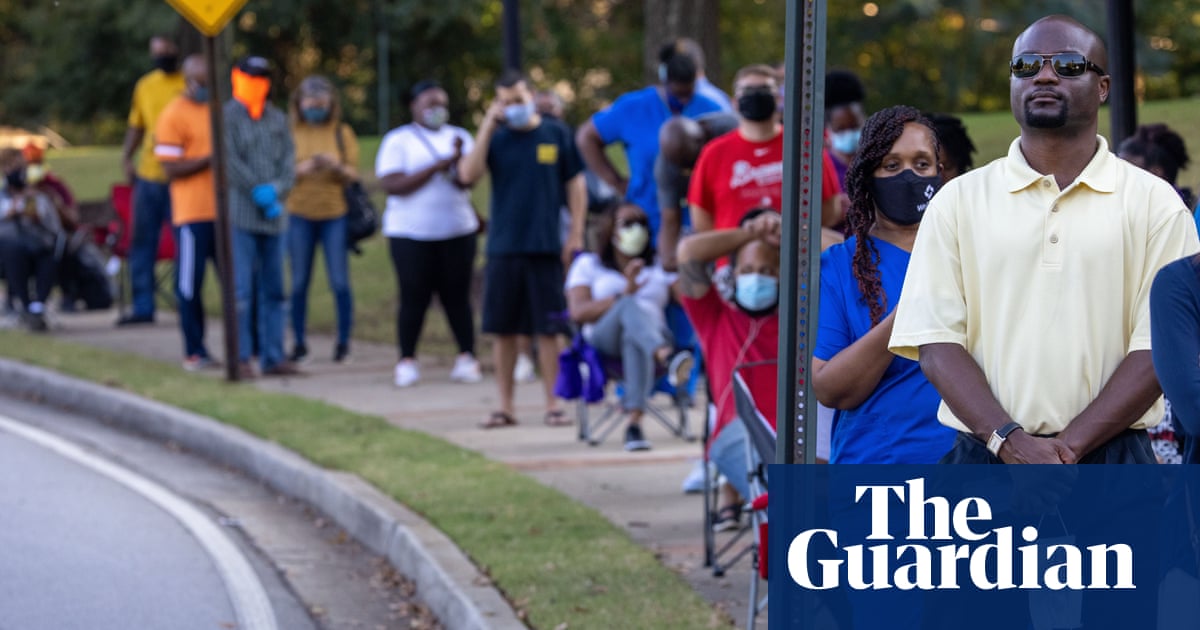 Voters in Georgia faced long hours in a row on Monday as people poured to the polls for the first day of early voting in the state, which has developed a national reputation for voting matters in recent years.

Eager voters endured waits of six hours or more in Cobb County, which was once solidly Republican but voted for Democrats in the last election, and joined the ranks that wrapped around buildings in solidly Democratic County. DeKalb. They have also turned out to be numerous in Floyd County, North Georgia, where support for Donald Trump is strong.

At least two counties briefly had problems with electronic polls used for voter check-in. The matter stopped voting for a while at the State Farm Arena in Atlanta. Voters who voted at the basketball stadium, which was used as a site for early voting, faced long waits as the glitch was resolved.

Adrienne Crowley, who waited over an hour to vote, told the Atlanta Journal Constitution that there was nothing that would get her out of line to vote. “I would have voted all day if I had to.”

Elsewhere in Atlanta, some voters have reported waiting more than 10 hours for a chance to vote early.

Voters began lining up outside polling stations in the hours before dawn, some using cell phone flashlights to help other voters fill out pre-registration forms, according to the Atlanta Journal Constitution.

Janine Eveler, director of election and registration for Cobb County, said the county had prepared as much as possible, “but there is only so much room in the rooms and parking in the parking lot.”

“We are maximizing both,” he said. “People are parking twice, we basically have a traffic jam in our parking lot,” he added.

Hundreds of people moved slowly along a line that snaked back and forth outside Cobb’s main polling office in a suburban area northwest of Atlanta. Good spirits seemed to prevail, although some people said at 1am they had been waiting for six hours. A short applause rose as a pizza delivery man brought a cake to someone in the queue.

Steve Davidson, who is black, said late US Congressman John Lewis and others fought too long and hard to secure his seat at the polls for him to tire out and walk away.

“They have been fighting for decades. If I have to wait six or seven hours, it is my duty to do so. I will happily do it,” Davidson said.

With record turnout expected for this year’s presidential election and concerns about coronavirus exposure, election officials and advocacy groups have encouraged people to vote early, in person or absent.

Nationwide, more than 9.4 million people have already voted, an unprecedented number, according to data collected by Michael McDonald, a professor of political science at the University of Florida.

Democrats are trying to win a US Senate seat in Georgia in a race, where Democratic candidate, Jon Ossoff, is taking on incumbent Republican, David Perdue.

Georgia has long been considered a republican bulwark, but many believe recent demographic shifts have made a state more competitive. A recent poll shows Donald Trump and Joe Biden have a statistical link in the state.