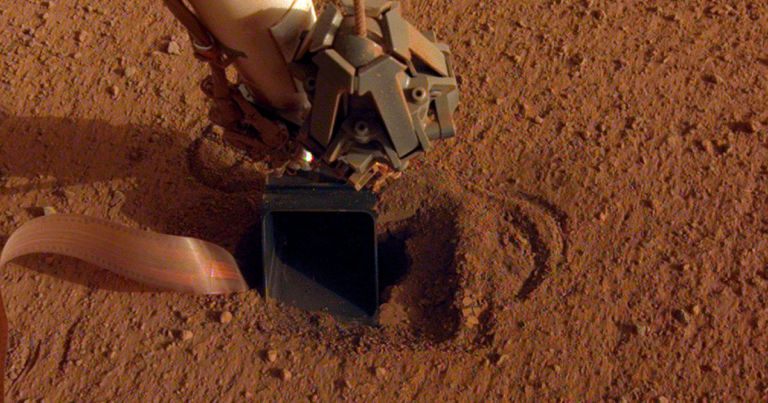 NASA has desperately tried to use the “mole” attached to its InSight Mars lander to bury in the Martian soil for more than 17 long months, but progress has been slow. The composition of the Martian soil was not exactly what scientists expected, forcing them to improvise.

In the latest update, NASA’s Jet Propulsion Laboratory outlined how the 16-inch mole, similar to a jackhammer, formally known as a heat flow package and physical properties (or HP3), met his latest hurdle.

While he was able to finally bury his entire length in the ground, according to an early June update, he appears to have had some trouble getting to the desired minimum depth of ten feet (or 3 meters). After a long 1

50-pound “hammering session” on June 20, as JPL says, the mole caused “fragments of soil that stirred inside the headstock – possible evidence that the mole had started bouncing on the spot, hitting the bottom of the headstock. “

The goal of the mole’s mission is to take the temperature of Mars from below the surface.

“How to study the heat output from a car engine, measure the heat from inside Mars to reveal how much heat flows from the body of the planet and what the source of heat is,” NASA wrote in a mission.

But delving into it may prove very difficult to move forward. It turned out that the mole’s thread was moving from side to side, according to images transmitted to Earth following the June mole’s hammering session.

The scientists’ best guess is that the soil does not provide enough friction. The ground beneath NASA’s InSight lander turned out to be “cement-like duricrust” according to JPL, which may have caused the mole to recoil and rebound.

The team behind the mole at the German Aerospace Center (DLR) hopes to collect some nearby soil and throw it in the hole after the mole to provide a little more friction.

The news comes after NASA scientists had to get creative to free the mole by hitting it with its digger shovel in March, after the entire mole’s machinery got stuck in the sand-like soil.

The DLR team estimates that 300 cubic centimeters of sand may be needed to fill in the blanks, a “number of scratches” from the InSight headstock.

More on the mole: NASA InSight Lander finally manages to bury its mole in Mars