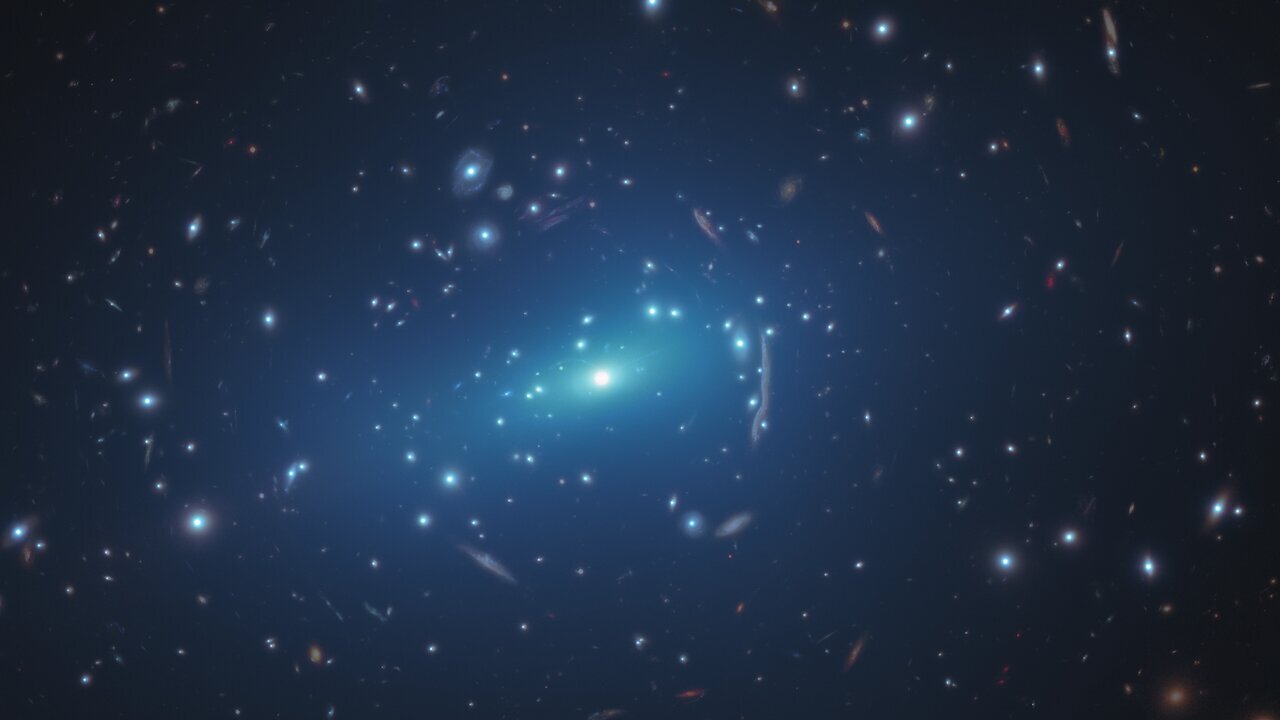 Observations from NASA / ESA’s Hubble Space Telescope and the European Southern Observatory’s Very Large Telescope (VLT) in Chile found that something may be missing in theories about how dark matter behaves. This missing ingredient could explain why the researchers discovered an unexpected discrepancy between observations of dark matter concentrations in a sample of massive galaxy clusters and theoretical computer simulations of how dark matter should be distributed in clusters. The new results indicate that some small-scale concentrations of dark matter produce lens effects that are 10 times stronger than expected.

Dark matter is the invisible glue that holds stars, dust, and gas together in a galaxy. This mysterious substance makes up most of the mass of a galaxy and forms the foundation for the large-scale structure of our universe. Since dark matter does not emit, absorb or reflect light, its presence is known only through its gravitational pull on visible matter in space. Astronomers and physicists are still trying to define what it is.

Galactic clusters, the most massive and recently assembled structures in the Universe, are also the largest deposits of dark matter. Clusters are composed of individual member galaxies that are held together in large part by the gravity of dark matter.

“Galactic clusters are ideal laboratories in which to study whether the numerical simulations of the Universe currently available reproduce well what we can deduce from gravitational lenses”, said Massimo Meneghetti of the INAF-Observatory of Astrophysics and Space Sciences of Bologna in Italy, l lead author of the study.

“We have done a lot of testing on the data in this study and we are sure this discrepancy indicates that some physical ingredient is missing from the simulations or from our understanding of the nature of dark matter,” added Meneghetti.

“There is one feature of the real universe that we are simply not capturing in our current theoretical models,” added Priyamvada Natarajan of Yale University in Connecticut, USA, one of the team’s senior theorists. “This may signal a gap in our current understanding of the nature of dark matter and its properties, as these exquisite data allowed us to probe the detailed distribution of dark matter on smaller scales.”

The distribution of dark matter in clusters is mapped by measuring the bending of light – the gravitational lensing effect – they produce. The gravity of dark matter concentrated in clusters magnifies and deforms the light from distant background objects. This effect produces distortions in the shapes of the background galaxies that appear in the cluster images. The gravitational lens can often also produce multiple images of the same distant galaxy.

The greater the concentration of dark matter in a cluster, the more dramatic its light-bending effect. The presence of smaller-scale dark matter clusters associated with individual cluster galaxies increases the level of distortion. In a sense, the galactic cluster acts as a large-scale lens that has many smaller lenses embedded within it.

Sharp Hubble images were taken by the telescope’s Wide Field Camera 3 and Advanced Camera for Surveys. Together with spectra from the European Southern Observatory’s Very Large Telescope (VLT), the team produced an accurate, high-fidelity map of dark matter. By measuring lens distortions, astronomers could track the amount and distribution of dark matter. The three main galaxy clusters, MACS J1206.2-0847, MACS J0416.1-2403 and Abell S1063, were part of two Hubble surveys: The Frontier Fields and Cluster Lensing And Supernova survey with Hubble (CLASH).

To the team’s surprise, in addition to the dramatic arcs and elongated features of distant galaxies produced by each cluster’s gravitational lenses, the Hubble images also revealed an unexpected number of small-scale arcs and distorted images nested near each cluster’s core. where the most massive galaxies reside. Researchers believe that nested lenses are produced by the gravity of dense concentrations of matter within individual cluster galaxies. Follow-up spectroscopic observations measured the velocity of stars orbiting within many of the cluster galaxies to fix their masses.

“The data from Hubble and the VLT provided excellent synergy,” shared team member Piero Rosati from the University of Ferrara in Italy, who led the spectroscopic campaign. “We were able to associate the galaxies with each cluster and estimate their distances.”

“The speed of the stars gave us an estimate of the mass of each individual galaxy, including the amount of dark matter,” added team member Pietro Bergamini of the INAF-Observatory of Astrophysics and Space Science in Bologna, Italy.

By combining Hubble imaging and VLT spectroscopy, astronomers were able to identify dozens of background galaxies with multiple images and lenses. This allowed them to assemble a well-calibrated, high-resolution map of the mass distribution of dark matter in each cluster.

The team compared the dark matter maps with samples of simulated galaxy clusters with similar masses, located at roughly the same distances. The clusters in the computer model did not show any of the same level of dark matter concentration on the smaller scales, the scales associated with individual cluster galaxies.

“With high resolution simulations, we can match the quality of the observations analyzed in our article, allowing detailed comparisons like never before,” added Stefano Borgani of the University of Trieste, Italy.

Astronomers, including those on this team, can’t wait to continue probing dark matter and its mysteries to finally pinpoint its nature.