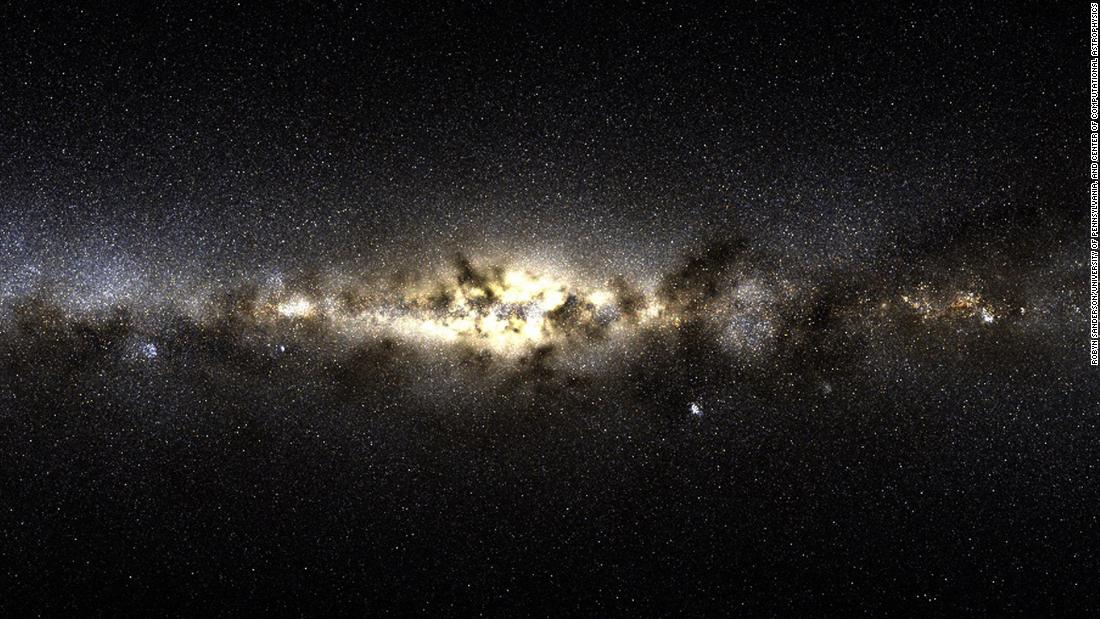 This new star cluster was named Nyx, for the Greek goddess of the night. They are located near the position of our sun in the galaxy and extend for about 6000 light years above and below the plane of the Milky Way galaxy if you were to see it from the side.

The 250-star cluster is rotating with the Milky Way galactic disk, where most of the stars in the galaxy are located. But Nyx stars are also moving towards the center of the galaxy.

“The two possible explanations here are that they are the remains of a [galactic] melting or that are disc stars that have been shaken in their new orbits due to a collision with the Milky Way disc, “said Lina Necib, author of the study and postdoctoral researcher in theoretical physics at the California Institute of Technology , in an email to CNN.

Mergers are the way galaxies grow. They devour smaller, smaller dwarf galaxies. Nyx was probably once a dwarf galaxy that merged with the Milky Way.

“If Nyx was really a dwarf galaxy, it would have collided with the Milky Way disc at a low level [angle]”

;, Said Necib.” What makes Nyx special is its “progradi” orbits, the fact that [the stars] are rotating together with the disk. We haven’t detected this type of merger before. “

A new way of studying galaxies

Necib and his colleagues used a combination of supercomputers and the Gaia space observatory, launched by the European Space Agency in 2013, to find Nyx.

Study the movement of stars and dark matter in the Milky Way, which can tell us a lot about our galaxy.

“If there are groups of stars that move together in a particular way, this usually tells us there is a reason why they are moving together,” he said.

Since Gaia was launched, the space observatory has mapped a billion stars in our galaxy and beyond, with the goal of creating an incredibly accurate 3D map by the end of the mission in 2022.

“Galaxies are formed by engulfing other galaxies,” said Necib. “We hypothesized that the Milky Way had a silent merger history and for a while it concerned how silent it was because our simulations show many mergers. Now, we understand that it was not as silent as it seemed. You are in the early stages of being able to truly understand the formation of the Milky Way. “

Necib and his colleagues combined the FIRE and Gaia data and analyzed them by applying deep learning methods, such as algorithms and artificial neural networks. “We cannot stare at seven million stars and understand what they are doing,” said Necib.

A deep learning model has been trained to track each star in the galaxies simulated by FIRE and then label them as natives of the host galaxy, or the product of galactic fusions.

Bryan Ostdiek, a postdoctoral research fellow at Harvard University, previously worked on the Large Hadron Collider, the largest and most powerful particle accelerator in the world near Geneva. He brought many of the machine learning techniques from that project to help interpret Gaia’s data.

When they applied theirs techniques for Gaia data, the neural network has classified and labeled the stars. The researchers tested its accuracy by looking for stars that are known to be the product of mergers with dwarf galaxies in the past and the model has identified them correctly.

Hence, the model identified a cluster of 250 stars, or what would become known as Nyx.

“Your first instinct is that you have a bug,” said Necib. “And you say” Oh no! “So, I haven’t told any of my collaborators for three weeks. Then I began to understand that it’s not a bug, it’s actually real and it’s new.”

He checked past research and this stellar stream had never been identified before, so Necib had the privilege of naming it.

“This particular structure is very interesting because it would have been very difficult to see without machine learning,” he said. “I think we have reached a point in astronomy where we are no longer limited to data. This project is an example of something that would not have been possible a few years ago, the culmination of developments in data with Gaia, high resolution simulations and machine methods. of learning “.

Necib and his colleagues will investigate more of Nyx in the future using terrestrial telescopes, including W.M. Keck Observatory in Hawaii and the Giant Magellan Telescope in Chile. This will allow them to study the chemistry of the stars and, finally, to discern their age and the time scale on which they merged with the Milky Way.

“Stars born outside the Milky Way have different chemicals than those born here,” said Necib.

Gaia will release further data in 2021 with new information on the already 100 million stars in its catalog. And these new data could shed light on Nyx.