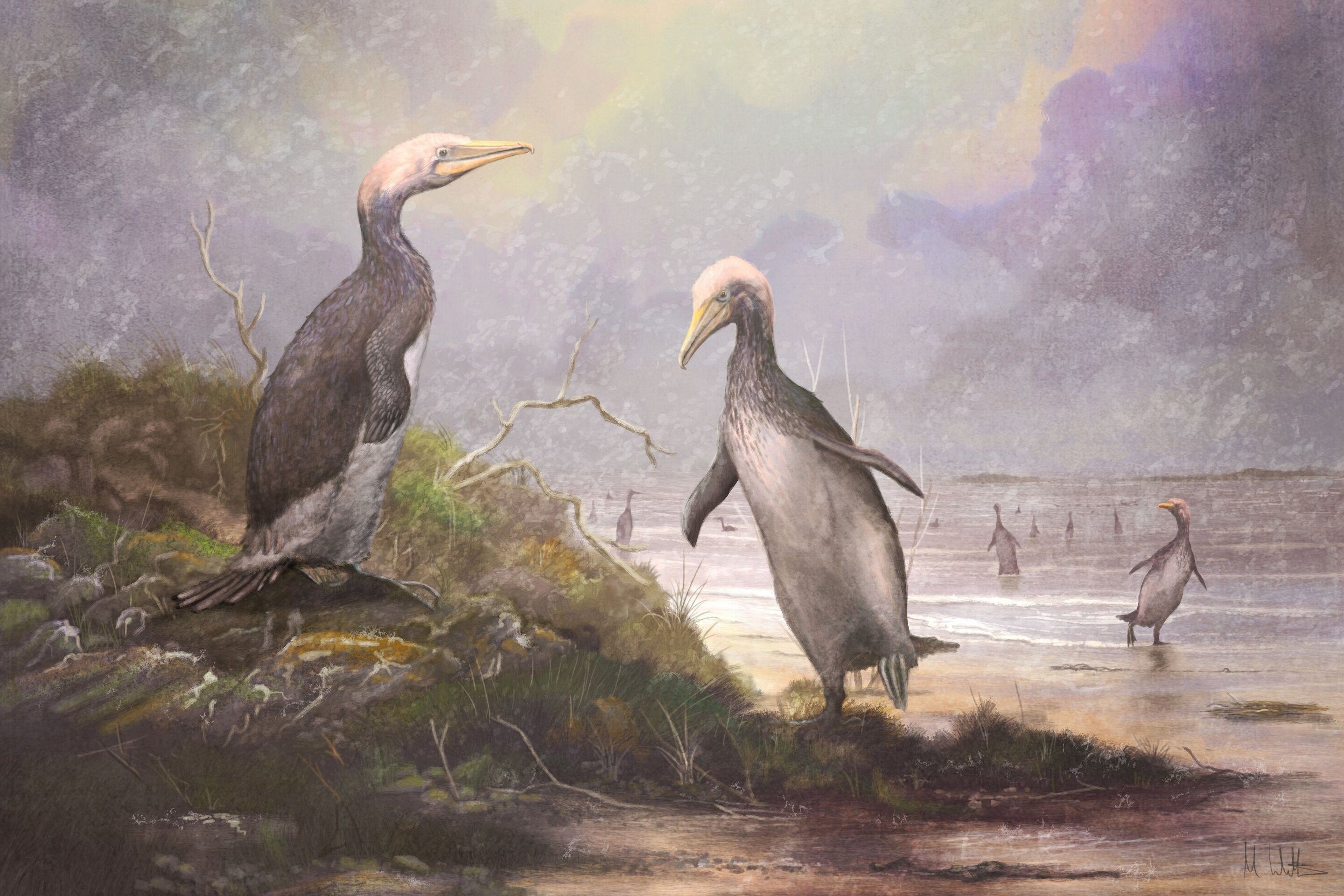 7;s monstrous penguins, who lived 62 million years ago, had doppelgangers in Japan, the United States and Canada, a study published today in Zoological systematic journal and evolutionary research he found.

Scientists have identified striking similarities between the fossilized bones of the penguins and those of a much younger group of northern hemisphere birds, the plotopterids.

These similarities suggest that plotopterids and ancient penguins looked very similar and could help scientists understand how birds started using wings for swimming rather than flying.

About 62 million years ago, the first known penguins swam in tropical seas that almost submerged the land that is now New Zealand. Paleontologists found the fossilized bones of these ancient waders in Waipara, north of Canterbury. They identified nine species, ranging in size from small penguins, the size of today’s yellow-eyed penguin, to monsters 1.6 meters high.

Plotopterids developed in the northern hemisphere much later than penguins, with the first species appearing between 37 and 34 million years ago. Their fossils have been found in numerous sites in North America and Japan. Like penguins, they used their fin-like wings to swim across the sea. Unlike the penguins, which survived in the modern era, the last species of plotopterids died out about 25 million years ago.

Dr Gerald Mayr of the Senckenberg Research Institute and the Frankfurt Museum of Natural History, James Goedert of the Burke Museum of Natural History and Culture and the University of Washington, USA, and the curators of the Canterbury Museum, Dr. Paul Scofield and Dr. Vanesa De Pietri compared the fossilized bones of plotopterids with fossil specimens of the gigantic species of penguins Waimanu, Muriwaimanu and Sequiwaimanu from the collection of the Canterbury Museum.

They found the plotopterids and the ancient penguins had similar long beaks with slit-like nostrils, similar bones of the chest and shoulders and similar wings. These similarities suggest that both groups of birds were strong swimmers who used wings to push them deep underwater in search of food.

Some species from both groups could grow enormously large. The largest known plotopterids were over 2 meters long, while some of the giant penguins were up to 1.6 meters tall.

Although they share a number of physical characteristics with both ancient and modern penguins, plotopterids are more closely related to boobs, gannets and cormorants than to penguins.

“The amazing thing about all of this is that plotopterids and ancient penguins have evolved these shared features independently,” says Dr. De Pietri. “This is an example of what we call convergent evolution, when remotely related organisms develop similar morphological traits under similar environmental conditions.”

Dr. Scofield says that some large species of plotopterids would have been very similar to ancient penguins. “These birds have evolved in different hemispheres, millions of years apart, but from a distance you wouldn’t be able to tell them apart,” he says. “Plotopterids looked like penguins, swam like penguins, probably ate like penguins, but they weren’t penguins.”

Dr Mayr says the parallels in the evolution of bird groups suggest an explanation of why birds developed the ability to swim with their wings.

“Wing-propelled diving is quite rare among birds; most swimming birds use their feet. We think both penguins and plotodopterids had flying ancestors who would dive from the air into the water in search of food. Over time, these ancestor species have improved in swimming and worse than flying. ”

Fossils of the giant penguins of New Zealand, including Waimanu and Sequiwaimanu, are currently exhibited together with life-size models of birds in the Canterbury Museum exhibit, “Ancient New Zealand: Squawkzilla and the Giants”, extended until August 16, 2020.

The comparative osteology of the Middle Cenozoic Plotopteridae similar to a penguin and the first true fossil penguins, with a comment on the origins of the wing propulsion dive, by Gerald Mayr, James L Goedert, Vanesa De Pietri and R Paul Scofield is published in Journal of zoological systematics and evolutionary research.