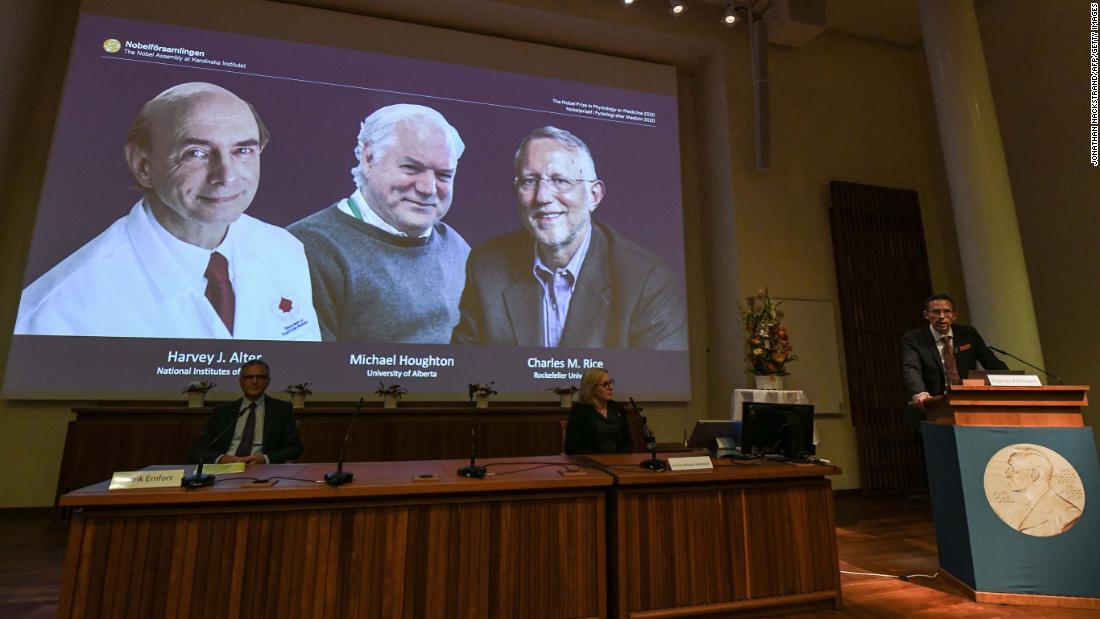 The Nobel Assembly said in a press release Monday that the three scientists “have made fundamental discoveries that have led to the identification of a new virus.”

He said the trio has “made a decisive contribution to the fight against blood-borne hepatitis, a serious global health problem that causes cirrhosis and liver cancer in people around the world.”

Globally, approximately 71 million people have chronic hepatitis C virus infection, according to the World Health Organization. A significant number of those who are chronically infected will develop cirrhosis or liver cancer.

7;s long overdue. Hepatitis C probably caused as many, if not more deaths, than the current coronavirus pandemic. It was a serious problem and this (work) was a huge step forward “.

Nobel Assembly Secretary Thomas Perlmann said he had to call the winners several times before finally catching up with Alter and Rice.

“I woke them up and they were very surprised, they definitely weren’t sitting by the phone because I called them a couple of times before with no response,” he said after making the announcement.

“But once they got there they were extremely surprised and really happy and almost speechless, so it was really fun talking to them.”

Methodical studies of transfusion-associated hepatitis by US scientist Alter showed that an unknown virus was a common cause of chronic hepatitis.

Houghton, a British scientist, used an untested strategy to isolate the genome of the new virus called Hepatitis C.

Rice, another American, has provided the final evidence showing that the hepatitis C virus alone could cause hepatitis.

Alfred Nobel – the inventor of dynamite – in 1895 created a fund that would give most of his fortune to those who serve humanity. Today, Nobel laureates recognize outstanding achievements in the fields of physics, chemistry, physiology or medicine, literature, peace and economics. Nearly 600 prizes were awarded between 1901 and 2019.

Nobel’s will stated that a portion of his fund would be dedicated to “the person who made the most important discovery in the field of physiology or medicine”.

The main inscription on one side of the medals of the Nobel Prize in Physics, Chemistry, Medicine and Literature is the same: “Inventas vitam juvat excoluisse per artes”, loosely translated as: “And those who have improved life on land thanks to a new mastery “.

The Nobel Prizes in Medicine, Physics and Chemistry are the pinnacle of scientific achievement – honoring great minds and life-changing discoveries.

The latter two will be announced on Tuesday and Wednesday respectively, followed by the Nobel Prize for Literature on Thursday, Friday by Peace and next Monday by the Prize for Economic Sciences.

Impatience: why we don’t want to wait and what we can do about it