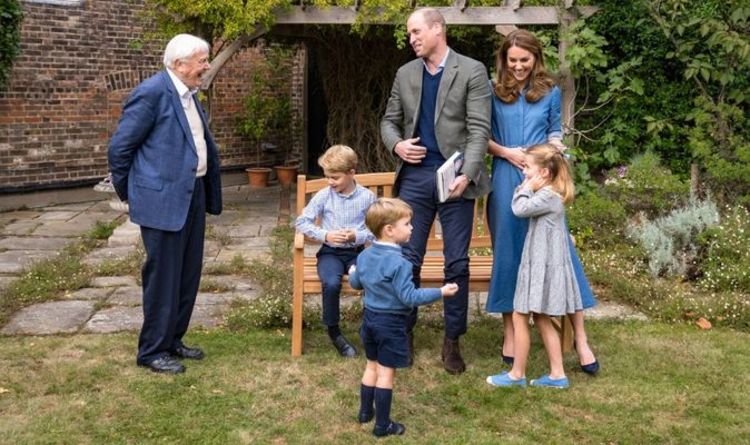 The sweet photo of the Cambridge family reveals a number of personality traits of the young royals, as they are candidly captured. In the photo, Kate is pictured laughing with her children, while Prince William chats with natural historian Sir David Attenborough.

Seven-year-old Prince George is pictured sitting on a wooden bench next to his father, looking shy as he looks down.

The third in line to the throne wears a smart blue checkered shirt with dark blue jeans and smart black shoes.

Conversely, Prince Louis, two, shows his cheeky side by standing with his hands in the air.

The youngest child in Cambridge wears an adorable pair of dark blue shorts, with matching long socks and a blue sweater.

The royal has part of her blonde hair tied in a braid with a cute blue ribbon.

Kate gives her two youngest children a chuckle as she watches them play.

A photo from the projection shows Sir David, 94, wrapped in a blue and gray checkered blanket, and the Duke watching the veteran broadcaster on the screen.

At the end of the vision, Sir David spoke with William, Kate and their three children.

During the discussion, the broadcast warned that humanity must act in a way that does not “annihilate part of the natural world”.

Both men share a passion for protecting the natural world and continue to support each other in their efforts to address some of the greatest environmental challenges facing the planet.

Further details on the award are expected in the coming weeks.

David Attenborough: A Life On Our Planet will premiere in theaters on Monday and will be released on Netflix on October 4th.

An accompanying book is published on October 1st.