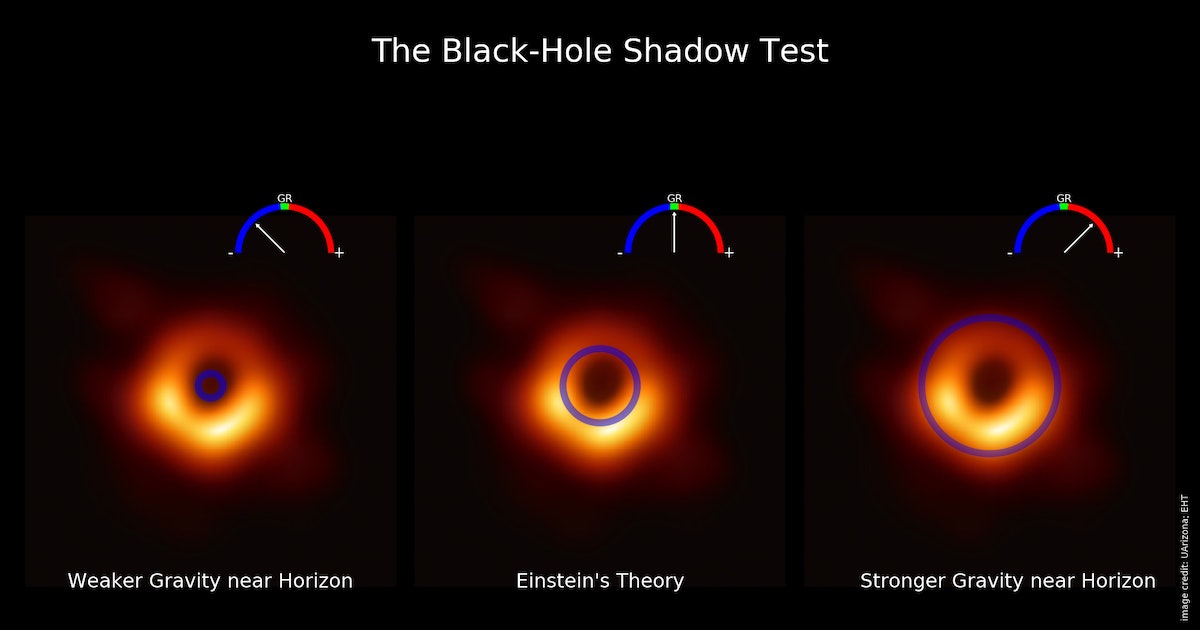 A little over a year ago, humanity has for the first time seen well the most mysterious object in the vast universe.

For the first time, astronomers had imaged a black hole, which was lurking on the dark side of the universe about 53 million light-years away, at the center of the galaxy Messier 87 (M87).

The iconic image has provided scientists with valuable data not only on this particular massive object, but on black holes throughout the cosmos.

Now, a team of astronomers using that same image were not only able to learn about supermassive black holes, but were using its spacetime distortion to test the theory of gravity.

Their findings were detailed in a study published last week in The Astrophysical Journal and introduces a new area of ​​research on black holes.

The image of M87 *, the first ever to be captured by a black hole, was compiled using the Event Horizon Telescope (EHT), which collected an enormous amount of data on M87 * through radio antennas throughout the world. The resulting image revealed a crescent of hot gas and debris orbiting the black hole̵

7;s event horizon, the region of space that directly surrounds a black hole from which nothing can escape.

The supermassive black hole at the center of the galaxy M87 is 6.5 billion times more massive than the Sun.

The hot gas swirling around the black hole appears as a bright ring, while the black dot in the center is the shadow cast by the black hole as it captures light that is too close to it. Using an analysis of the black hole shadow, the team behind the new study was able to test Einstein’s Theory of General Relativity.

In 1915, the famous physicist theorized that huge objects deformed space and time around them. The gravitational force of a huge black hole curves spacetime and acts as a magnifying glass so that the shadow of a black hole appears larger than it is.

The researchers behind the new study measured this visual distortion to test Einstein’s theory and found that it occurs.

“This is really just the beginning,” Lia Medeiros, a researcher at the Institute for Advanced Study and lead author of the study, said in a statement. “We have now shown that it is possible to use an image of a black hole to test the theory of gravity.”

This is the first time a gravitational test has been conducted at the edge of a black hole and shows that Einstein’s theory of general relativity holds true even in the extreme conditions of the black hole’s environment.

“This test will be even more powerful once we envision the black hole at the center of our galaxy and in future EHT observations with further telescopes to be added to the array,” Medeiros said.

The recent study not only provides a new way to test gravity theory, but also helps scientists better understand the nature and evolution of black holes by allowing them to link data collected from black hole images to data collected by others. gravitational experiments.

Abstract: 2017 Event Horizon Telescope (EHT) observations of the central source in M87 led to the first measurement of the size of a shadow of a black hole. This observation offers a clean new gravitational test of the black hole metric in the strong field regime. We show analytically that spacetime that deviate from the Kerr metric but meet the weak field tests can lead to large deviations in predicted black hole shadows that are inconsistent with current EHT measurements. We use numerical calculations of regular, parametric, and non-Kerr metrics to identify the common feature among these different parametrizations that control the expected shadow size. We show that shadow size measurements place significant constraints on the deviation parameters that control the post-Newtonian and higher second order of each metric and are, therefore, inaccessible to weak field tests. The new constraints are complementary to those imposed by gravitational wave observations from stellar mass sources.