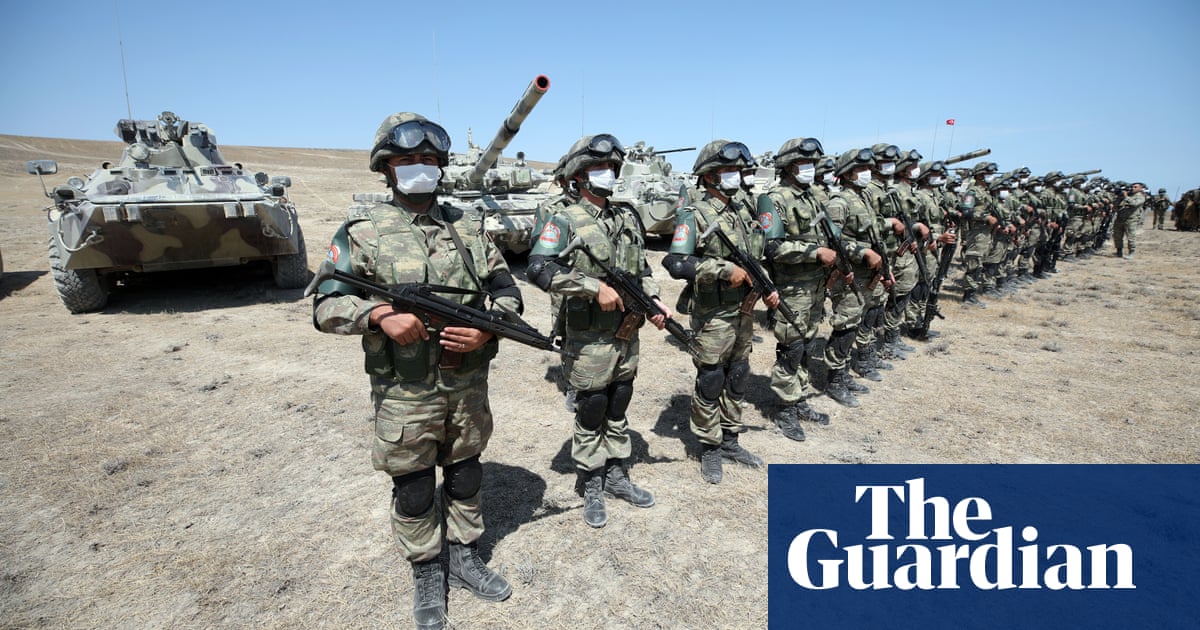 Syrian rebel fighters have signed up to work for a Turkish private security company as border guards in Azerbaijan, several volunteers in Syria’s last rebel stronghold said, at a time when the long-lasting conflict between Baku and neighboring Armenia is showing dangerous signs of escalation.

The potential deployment is a sign of Turkey’s growing appetite for overseas power projection and opens up a third theater in its regional rivalry with Moscow. Ankara is already engaged in a volatile power struggle with Russia in the conflicts in Syria and Libya, and tensions may now spill over into Nagorno-Karabakh.

The Guardian spoke to three men living in the last corner of rebel-controlled Syria, who said nearly a decade of war and extreme poverty had made them eager to register with militia leaders and middlemen who vowed to work with a Turkish private security company abroad. They expect to cross the border into Turkey before flying to Azerbaijan.

The arrival of foreign fighters would inject a new level of complexity into the battle between Yerevan and Baku over the disputed Nagorno-Karabakh region, an enclave legally considered part of Azerbaijan but which has been run by ethnic Armenians since it declared the independence after the collapse of the Soviet Union in 1

991. The area attracts Western attention because it is an important corridor of oil and gas pipelines.

Clashes in July that killed 17 people in a different border region, as well as new hostilities in Nagorno-Karabakh over the past two days, which have so far resulted in 15 deaths, have raised concerns that the dormant conflict could once again precipitate. . full blown war.

Turkey has strong cultural and economic ties with Azerbaijan. Russia has traditionally been close to Armenia, but in recent years it has forged ties with Baku’s elites and continues to sell arms to both sides.

While most of the international community, including Moscow, called for a reduction in the escalation and a return to the diplomatic process in Nagorno-Karabakh, Turkish President Recep Tayyip Erdoğan said on Sunday that Baku has his country’s full support.

“The Turkish people stand with their Azerbaijani brothers by all our means, as always,” he said on Twitter, continuing to criticize other nations for “double standards and insufficient reaction” against what he called Armenian attacks.

Observers wondered why Baku’s highly trained and well-armed military forces would need the assistance of Syrian mercenaries. Men in the rebel-controlled Syrian province of Idlib, however, say a recruitment campaign began a month ago.

Two brothers living in Azaz, Muhammad and Mahmoud, who asked to change their names due to the sensitivity of the matter, said they were summoned to a military camp in Afrin on 13 September.

Upon arrival, a commander of the Turkish-backed Sultan Murad division told him that work was available guarding the observation posts and oil and gas plants in Azerbaijan on three- or six-month contracts for 7,000-10,000 Turkish lira. (£ 700- £ 1,000) per month – far more than they could earn at home.

The commander did not provide details on what the job would entail, how long the secondment would last or when they should have left. The men are not even clear on the name of the Turkish security company or who would pay their salaries.

“Our leader told us that we will not fight, but we will only help protect certain areas,” Muhammad said. “Our salaries aren’t enough to live on, so we see it’s a great money making opportunity.”

“There are no jobs available,” added his brother Mahmoud. “I worked as a tailor in Aleppo, but since we moved to Azaz [after Aleppo fell to Assad in 2016], I have tried many times to practice my trade but my family and I cannot earn enough “.

The promised salaries are huge sums compared to the 450-550 Turkish lira per month that Syrian rebels earn from Ankara in the fight against Syrian President Bashar al-Assad.

Ankara has supported the Syrian opposition since the early days of the war, although the original Free Syrian Army umbrella group has weakened and fragmented due to infighting and the growth of Islamist elements within the ranks of the rebels.

Turkey also uses some rebel fighters as delegates against Kurdish-led forces, despite allegations of human rights violations by guard dogs.

Since December, Ankara has also facilitated the movement of thousands of Syrian rebels into Libya as mercenaries, where they have helped turn the tide of the civil war in favor of warlord Khalifa Haftar, who fights the UN-backed government.

Omar from Idlib city, who also asked not to use his real name, was called to Afrin on 22 September along with 150 other men and asked to prepare to leave, only to be informed later the same day. that the deployment had been delayed until further notice. He said he asked around for a broker’s number after learning of the potential deployment, registering his name with a local agent with the understanding that Omar would pay him $ 200 (£ 156) of his first month’s salary.

“When we started offering us overseas jobs in Libya, people were afraid to go there, but now there are definitely thousands of us who are willing to go to Libya or Azerbaijan,” he said. “There’s nothing for us here.”

As with Azerbaijan’s proposal, some men who went to Libya said they were also told they would be employed as guards, but instead found themselves embroiled in frontline fighting. Many also reported that commanders pocketed up to 20% of their salaries.

Elizabeth Tsurkov, a colleague at the Center for Global Policy based in Washington DC, said: “The international community considers the lives of Syrians to be expendable, with Syria serving as an arena to settle geostrategic scores and promote the interests of countries intervening in the country at the expense of the Syrians.

“Syrians have resisted and still resist this logic, but the economic ruin resulting from the war and the recent depreciation of the Syrian currency mean that most Syrians are now struggling to feed themselves. Faced with few choices, many are now willing to sell themselves to the highest bidder. “

Several sources from the Syrian National Army (SNA), the main umbrella of Turkey-funded Syrian rebel groups, as well as the monitor of the Syrian Observatory for Human Rights, say that a first batch of 500 Syrian fighters from Sultan Murad and Al Hamza of SNA divisions have already arrived in Azerbaijan, including two senior commanders: Fahim Eissa, the leader of Sultan Murad, and Saif Abu Bakir of Al Hamza. The Guardian could not confirm the reports.

The rumors have been reinforced by several unverified social media videos purporting to show armed Syrian rebels traveling along an Azerbaijani road in the back of pickup trucks singing battle songs.

Both the Armenian government and Russian media have claimed that up to 4,000 Syrian men are already present in Nagorno-Karabakh, claims that have been denied by Baku as “nonsense”.