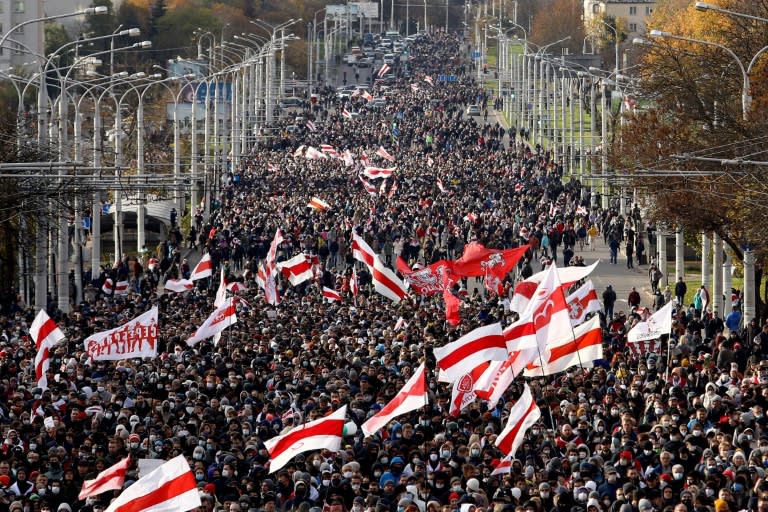 Belarusian police on Sunday arrested more than 200 people as tens of thousands marched against strongman Alexander Lukashenko in defiance of police threats to open fire after weeks of demonstrations.

Crowds of protesters waving red and white opposition flags took to a gritty industrial district in southeast Minsk for a march along Partisan Prospect, a key transportation thoroughfare and home to numerous factories.

Protesters took to the streets despite threats from police this week to use lethal force from now on “if necessary”.

Some protesters chanted “Strike!” and “You and your riot police get out!”

Chemodanova said more than 200 people were arrested, most of them in Minsk.

The former Soviet nation was gripped by historic protests after Lukashenko claimed victory in the August 9 elections over Svetlana Tikhanovskaya, a popular opposition candidate.

Protester Anzhela Krasovskaya said she was not afraid of threats from the authorities to use live ammunition.

“There is no going back for us,” Krasovskaya told AFP. “If they started shooting, there would be even more people on the streets.”

“The level of violence perpetrated by the authorities is unprecedented,” he told AFP.

Telephone networks were severely disrupted and mobile operator MTS Belarus said it had been ordered to restrict access to “ensure national security”.

Tikhanovskaya, who was granted refuge in EU member Lithuania after the vote, called on Lukashenko to step down from power before October 25, warning that he would otherwise face a crippling general strike.

Ahead of Sunday’s protest, the 38-year-old urged Belarusians to pursue their demands.

“We will only stop when every political prisoner is free, when members of law enforcement start defending the people, and the rule of law and fair elections return to Belarus,” said Tikhanovskaya.

The Nexta Live channel on the social-media platform Telegram, which coordinated the demonstrators, urged Belarusians to express solidarity with the workers during the protest, dubbed the “march of the partisans”.

“We, descendants of glorious warriors and partisans, are worthy of our ancestors who have already defeated fascism once,” the channel said in a message to its more than two million subscribers.

During World War II, Nazi-occupied Belarus had the largest partisan movement in Europe.

The protest movement has held a series of large-scale demonstrations over the past two months, with 100,000 or more taking to the streets every Sunday.

Tikhanovskaya, who claims to have won the polls in August, says Lukashenko must free political prisoners and put an end to “state terror”.

Several people have died and thousands have been arrested in a post-election crackdown, with harrowing reports surfacing of abuse in prisons. Many said they were tortured, beaten and humiliated while in detention.

In view of Sunday’s march Ivan Tertel, head of the KGB security service, said that provocations are being prepared to “destabilize the situation in our country”.

Many said they supported Tikhanovskaya’s call for a general strike, expressing the hope that it could help end the current impasse.

“We have to take the situation forward,” said student Oleg Demyanenko. “Many of my friends are ready.”

Lukashenko, who has been in power for 26 years, refused to step down and secured the support of his Russian counterpart Vladimir Putin.

The European Union refused to recognize the results of the contested vote. Last week EU foreign ministers decided to impose sanctions on Lukashenko as the blockade seeks to increase pressure on crackdowns on protesters.

A Norwegian MP said on Sunday that he named Tikhanovskaya and his two opposition coalition partners for the 2021 Nobel Peace Prize for organizing the peaceful protests.

Geir Toskedal of the Christian Democratic Party told the Vart Land newspaper that he nominated Tikhanovskaya, Maria Kolesnikova and Veronika Tsepkalo “for their fight for fair elections and for inspiring a peaceful opposition against the illegitimate regime in Belarus”.

Kolesnikova is in prison, while Tsepkalo, like Tikhanovskaya, has left the country.

Trump and Africa: how Ethiopia was “betrayed” by the Nile dam