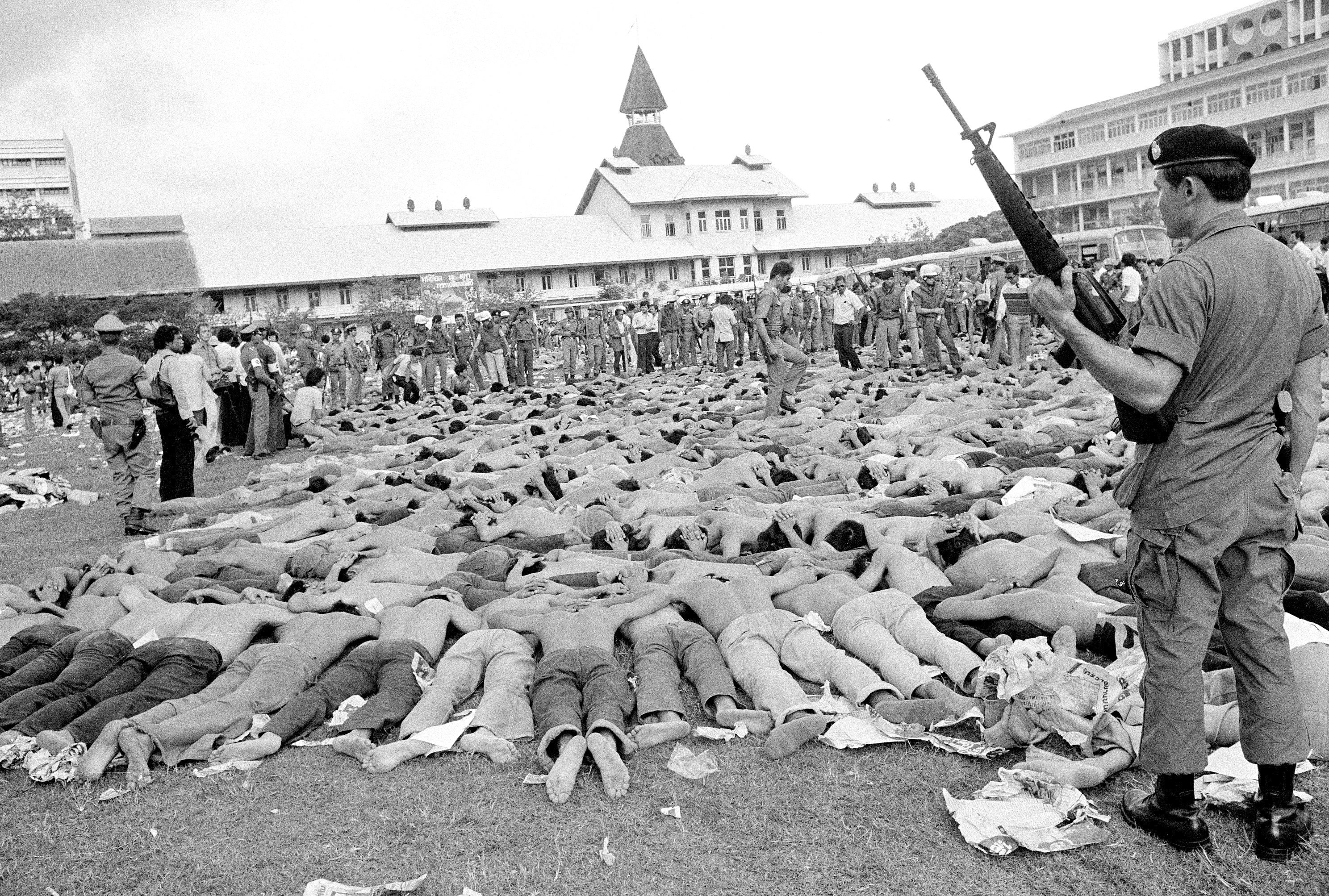 BANGKOK (AP) – The anti-government protests that challenge the institutions of the traditional Thai ruling class are not only provoking an intense debate on the future of the country. They are pushing young people to delve into the darkest events of the not so distant past.

Academics and researchers say they see an increase in the number of people wanting to know about a 44-year-old student massacre that traditional Thai history books ignore.

At Thammasat University in Bangkok last week, students who were exploring connections to the troubled past took photographs for “then and now”

; comparisons with the bloodletting that took place on campus on October 6, 1976.

At another university in the capital, students hungry for information about the massacre sifted through books to write an article for their online newspaper. Like many young Thais, they knew practically nothing.

This year’s protesters are seeking new elections, a more democratic constitution and an end to intimidation of political activists. Their speeches have repeatedly highlighted the 1976 tragedy, sparking the interest of the current generation in what their ancestors went through.

“We connect to the October 6 event because it was when the state used force against those of different beliefs,” said third-year student Ruchapong Chamjirachaikul. “And we can see from the present that there are people and the student movement who question the power of established political institutions and the responses are also threats, use of force and legal intimidation against those with different beliefs.”

Thailand in October 1976 was in turmoil after a dictator ousted by a popular uprising three years earlier was allowed to return from exile to serve as a Buddhist monk. Deadly attacks on leftist activists had intensified and the government – unnerved by neighboring regimes in Vietnam, Cambodia and Laos falling under Communist rule – fought its own armed uprising in the countryside.

The police in that violent September had killed two workers of a state-owned enterprise who tried to stick posters against the dictatorship. Thammasat University students have mobilized – as they have often done since 1973 – to protest the killings and the return of the dictator.

A student theater group staged a skit about the killings of workers; Right-wing newspapers and an army-run radio station trumpeted that the skit was actually a barely disguised attack on the monarchy. Police and organized vigilante groups began gathering outside the university gates on the night of 5 October and launched a violent all-out assault the next morning.

Official reports say 40 students were killed, but the actual toll is believed to be much higher.

Photos and footage of unbelievable brutality – savage shots from heavy guns headed for campus, desecration of bodies dragged out – left indelible images. But over time, the massacre became a non-event in Thailand, never included in school textbooks and quickly faded from national consciousness.

This is because it raises uncomfortable questions about who was responsible, some academics say, and because it contradicts the official narrative about the unity and goodness of Thai society.

“To delve into what happened in 1976, many people fear it will involve the ruling elite and their associates,” said Puangthong Pawakapan, professor of political science at Bangkok’s Chulalongkorn University. “They don’t want people to know. They want people to forget about it.”

Instead, they seem to be finding out. An anniversary exhibit attracts a steady stream of curious visitors; while online, the interest is a flood. In August, as the contemporary protest movement gained momentum, a Facebook page dedicated to the massacre recorded 1.3 million visits. Visits to an online memorial site have increased 13 times.

Then, as now, the most explosive issue is the monarchy.

Some of today’s protest leaders are calling for a significant reform of the royal institution, which is enshrined in law as a constitutional monarchy. For many conservative Thais, whose devotion to the throne is unconditional, this is an insidious idea.

Veteran politician Warong Dechgitvigrom in August launched the Thai Pakdee group – Loyal Thais – with the stated aim of protecting the monarchy from “nation haters”. He accused that raising the specter of 1976 is just a way to get young people to support the revolution and the establishment of a republic, a goal explicitly denied by the protesters.

“So these people have to dig the story of 40 years ago, which happened even before some of these young people were born, just to create hatred in our society,” he said.

State and city to suppress parties and large gatherings