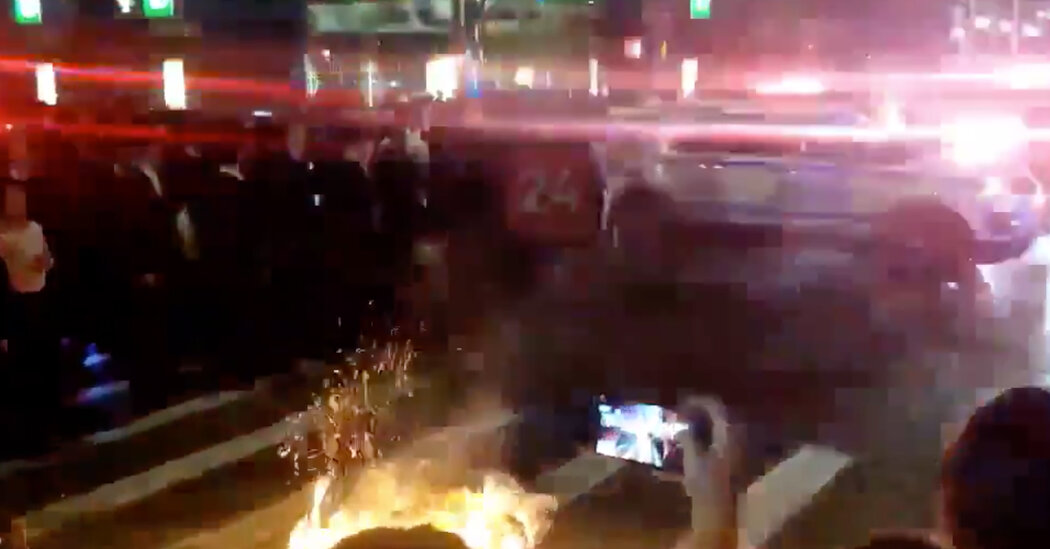 On Wednesday, Orthodox Jews and other religious leaders lashed out at Governor Andrew M. Cuomo over new coronavirus restrictions on schools, businesses and places of worship, as protests erupted in Brooklyn overnight, leading to scenes of chaos. and to the injury of at least one person.

“We are shocked by Governor Cuomo’s words and actions today,” four Orthodox Jewish lawmakers representing areas affected by the closure said in a letter posted online late Tuesday evening. “He has chosen to pursue a scientifically and constitutionally questionable closure of our communities”

Their frustration was reflected on the street, where video widely shared on social media showed hundreds of Hasidic men, most without masks, gathering after midnight and setting fires along 13th Avenue in the Borough Park neighborhood. The crowd soon became violent, with a crowd angrily swarming at least one Hasidic man whom they believed was disloyal to the community.

“Infiltrated!” a man can be heard screaming in English in a video as the crowd beats him. He was identified as Berish Getz by a relative, who spoke on condition of anonymity for fear of their safety, and was treated overnight at Maimonides Medical Center in Brooklyn.

The police department did not immediately respond to a request for comment.

The new restrictions, announced Tuesday by Mr. Cuomo, are meant to combat concerns Coronavirus outbreaks in Brooklyn, Queens and the northern suburbs of New York City, including several areas with large Orthodox populations.

Mr. Cuomo seemed to specifically target Orthodox synagogues which became scenes of large gatherings of faithful clustered together, with many not wearing face coverings. The governor used photos of crowds packed with Orthodox Jews this week to argue for the imposition of restrictions in some areas.

The rules would close commercial activities and non-essential schools and impose strict restrictions on places of worship, where attendance in the most affected areas would be limited to 10 people. In other neighborhoods, participation would be limited to 25 people.

Religious leaders said they had not been consulted before the governor announced the new rules, which would take effect on Friday, the day before a major Jewish holiday.

But the anger was not limited to the Orthodox Jewish community. The Roman Catholic diocese of Brooklyn, which has 1.5 million followers and 210 churches in Brooklyn and Queens, said it was taken aback by the governor’s announcement. Bishop Nicholas DiMarzio of Brooklyn condemned the new rules as “outrageous” in a statement Tuesday night.

“We are fervently opposed to being told to further reduce capacity, because we have strictly adhered to the Covid-19 protocols and the security measures have worked,” he said. “The safety of the parishioners is fundamental for the diocese of Brooklyn, but the religious freedom of our parishioners is unjustly attacked”.

“It is outrageous that, after having incurred a large expense to implement all safety protocols, our parishes are forced to reduce capacity to a maximum of 10 people in the red zone and 25 people in the orange zone,” he added. “A capacity of 10 to 25 people is disrespectful to Catholics and the clergy who have all followed the rules”.

In a letter posted online Tuesday, four Orthodox Jewish lawmakers – State Assembly member Simcha Eichenstein and State Senator Simcha Felder, and City Council members Kalman Yeger and Chaim Deutsch – accused Mr. Cuomo of lying to the leaders of the community on the extent of his isolation plan during a conference call early Tuesday. They denounced it as “a double bait and exchange”.

Lawmakers also criticized the governor for “irresponsible and pejorative” rhetoric, including using a photograph from more than 10 years ago at a press conference earlier this week showing a Hasidic crowd gathering for a funeral. .

“We will not be deprived of the right that we have in America, like everyone else in America, to observe our religion,” said Mr. Yeger. “I don’t care who in the government thinks they can stop us. They’re wrong. Let them try.”

Mr. Yeger was joined by Heshy Tischler, a local activist who disrupted a city press conference on the rise of the coronavirus and spent the past few days denouncing the recent increase in cases as a hoax. Later, as a police officer watched, Mr. Tischler addressed the crowd on a megaphone.

“You are my soldiers! We are at war! “He said.” We will show them that our schools are open and that we will respect our police officers!