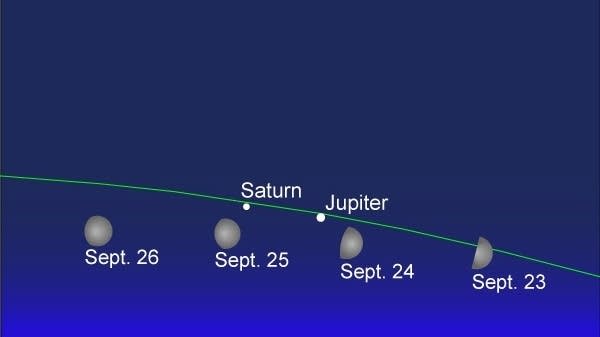 There is a spectacular sight in the southern sky this fall.

It is called the Great Conjunction. Saturn and Jupiter are bright in the southern sky on clear evenings. The crescent moon adds to the show hanging in Saturn’s lower left tonight.

On 23, 24, 25 and 26 September 2020, look for the moon in the evening sky and it will guide you to Jupiter and Saturn, the two largest gas planets in our solar system. Given the clear skies, you can’t miss these bright worlds. The moon is the second brightest celestial object, after the sun. And Jupiter is also exceptionally bright, outperforming all stars (but just a hair less bright than dazzling Mars; more on Mars below). As for Saturn, it is bright like the brightest stars. Furthermore, Jupiter and Saturn are now noticeable for their proximity to each other. They are headed for a major conjunction before the end of 2020.

The great conjunction of December 2020

Jupiter and Saturn are now 7.5 degrees apart in the southern sky. They will approach this fall and will be only 0.1 degrees apart on the winter solstice of December 21st.

Astro Bob writes for the Duluth News Tribune about how the two planets come close together on December 21st.

More distant Saturn orbits at 21,675 mph (9.7 km / sec) and takes 29 years to circle the sun. Because Jupiter is closer to Earth is travels faster than Saturn about once every 20 years, an event called a great conjunction.

Since the orbits of Jupiter and Saturn are slightly inclined with respect to Earth’s orbit, by 1.3 ° and 2.5 ° respectively, when they align the distance between them varies, making each conjunction different. If they were in exactly the same plane, Jupiter would always pass directly in front of Saturn, but it is extremely rare.

Enjoy the fantastic spectacle of the sky on clear evenings this fall.