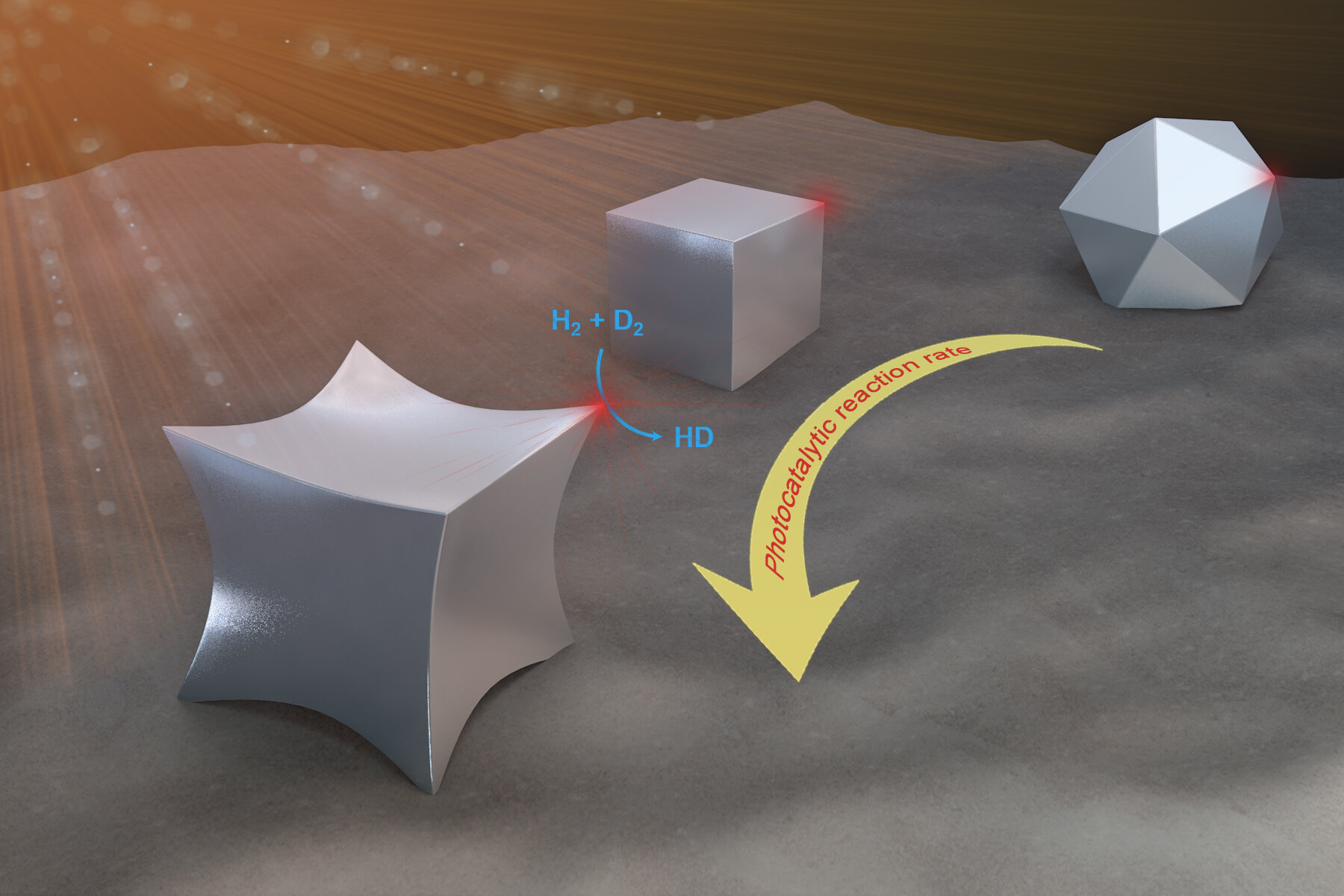 Points are important when designing nanoparticles that drive important chemical reactions using the power of light.

Researchers at Rice University’s Laboratory for Nanophotonics (LANP) have long known that the shape of a nanoparticle affects how it interacts with light, and their latest study shows how shape affects a particle’s ability to use light to catalyze important chemical reactions.

In a comparative study, LANP graduate students Lin Yuan and Minhan Lou and their colleagues studied aluminum nanoparticles with identical optical properties but different shapes. The most rounded had 14 sides and 24 blunt tips. Another was cube-shaped, with six sides and eight 90-degree angles. The third, which the team dubbed the “octopod,” also had six sides, but each of its eight corners ended in a pointed tip.

All three varieties have the ability to capture energy from light and periodically release it in the form of super-energetic hot electrons that can speed up catalytic reactions. Yuan, a chemist in the research group of LANP director Naomi Halas, conducted experiments to see how well each of the particles behaved as photocatalysts for the hydrogen dissociation reaction. Tests showed that octopods had 10 times faster reaction rates than 14-sided nanocrystals and five times faster than nanocubes. The octopods also had lower apparent activation energy, about 45% lower than nanocubes and 49% lower than nanocrystals.

“The experiments showed that sharper angles increase efficiency,” said Yuan, co-lead author of the study, published in the American Chemical Society journal. ACS Nano. “For octopods, the angle of the angles is about 60 degrees, compared to 90 degrees for cubes and more rounded points on the nanocrystals. So the smaller the angle, the greater the increase in reaction efficiency. But how small the angle can be is limited by chemical synthesis. These are single crystals that prefer certain structures. You cannot achieve infinitely greater sharpness. “

Lou, a physicist and lead co-author of the study in LANP’s Peter Nordlander research group, verified the results of the catalytic experiments by developing a theoretical model of the hot electron energy transfer process between light-activated aluminum nanoparticles and the hydrogen molecules.

“We enter the wavelength of the light and the shape of the particles,” said Lou. “Using these two aspects, we can accurately predict which form the best catalyst will produce.”

The work is part of an ongoing green chemistry effort by LANP to develop commercially viable light-activated nanocatalysts that can insert energy into chemical reactions with surgical precision. LANP has already demonstrated catalysts for the production of ethylene and syngas, the splitting of ammonia to produce combustible hydrogen and to break up “chemicals forever”.

“This study shows that the shape of the photocatalyst is another design element that engineers can use to create photocatalysts with higher reaction rates and lower activation barriers,” said Halas, Stanley C. Moore Professor of Electrical and Computer Engineering of Rice, director of Rice’s Smalley-Curl Institute and a professor of chemistry, bioengineering, physics and astronomy, materials science, and nanoengineering.