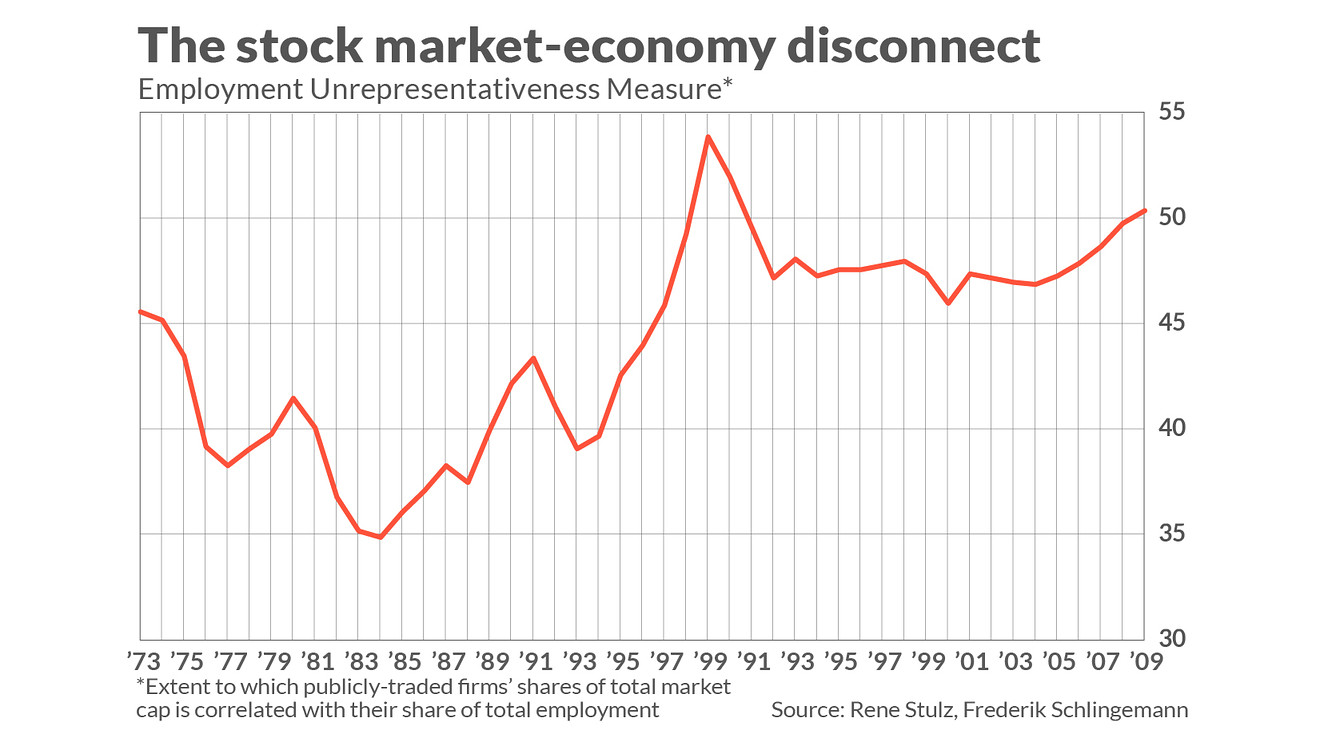 CHAPEL HILL, N.C. – We can stop discussing whether the stock market has become more disconnected from the economy.

It undeniably does, according to a just completed academic study by Rene Stulz, professor of banking and monetary economics at Ohio State University, and Frederik Schlingemann, professor of finance at the University of Pittsburgh. But don’t blame this growing disconnect on the COVID-19 pandemic; professors show that the trend towards greater disconnection dates back to at least five decades ago.

Prior to this study, the debate over disconnection from the stock market economy had generated more heat than light. As usual in this day and age, he had become intensely politicized. On the one hand, many have found that the stock market obscene
SPX,

it could reach new all-time highs in the wake of record unemployment. They argued that the market
DJIA,

force tells us nothing about the economy and everything we need to know about how our political system rewards the upper classes.

On the other hand, many others have argued that since the level of the stock market – in theory – is a function of expected future growth in corporate earnings, there is nothing particularly surprising in its disconnection from what is happening at the same time. Those in this field then celebrate every stock market rally as proof that President Trump’s economic policies are working.

Professors respond to this debate by arguing that it cannot be solved theoretically. As they write in the study: “How much the stock market reflects the economy is an empirical question.”

They focus on several measures, but perhaps the easiest to understand is the proportion of total employment that comes from public companies. At the beginning of the sample of professors in the early 1970s, 41.4% of non-farm workers in the private sector were employed by publicly traded companies. In 2019 this percentage had dropped to 29.0%.

Note that even in the early 1970s, less than half of private non-farm employment in the United States came from publicly traded companies, and that this percentage has only declined modestly since then. So the disconnection from the stock market economy is not entirely a new phenomenon.

This conclusion was reinforced by what the professors discovered by digging deeper into the data: the long-term trend towards greater disconnection has not followed a straight line. In fact, they found that the current disconnect isn’t even the highest in the last 50 years.

Consider a “measure of non-representativeness of employment” created by professors, which reflects the degree to which a company’s market capitalization share of the total market differs from its total employment share. This measure would be low if the publicly traded company employing the most people also had the largest market capitalization, and so on. Higher readings would therefore indicate greater “lack of representativeness” – greater disconnection, in other words.

The graph at the beginning of this article shows the extent of the lack of representativeness of professors’ employment. Note that while the current reading is higher than it was in the 1970s, it is not as high as that recorded at the top of the internet bubble.

According to the professors, both short-term and long-term factors operate here. The shorter-term factor is market valuation: the disconnection of the stock market economy increases as valuations rise. This is a disturbing finding, given that their measure of employment unrepresentation is now higher than at any other time except at the top of the internet bubble.

The long-term factor, according to the professors, is the shift from manufacturing to a high-tech economy. As a general rule, high-tech companies employ fewer people than manufacturers. The company currently at the top of the market cap: Apple
AAPL,

– has 137,000 employees, according to FactSet. Conversely, when General Motors
GM,

Fifty years ago it was at the top of the market capitalization charts, employing over 600,000 people.

Bottom line: There is a growing disconnect in the stock market economy. The strength of the stock market tells us less about the true state of the economy than at almost any other time in the past five decades. And this is not a political conviction, but a statement of fact.

Mark Hulbert is a regular MarketWatch contributor. His Hulbert Ratings tracks investment newsletters that pay a flat rate to be verified. He can be reached at mark@hulbertratings.com.

Panera adds pizza to its menu to double the dinner