Thwaites Glacier: Antarctica’s colossal glacier is melting rapidly and scientists may have discovered why 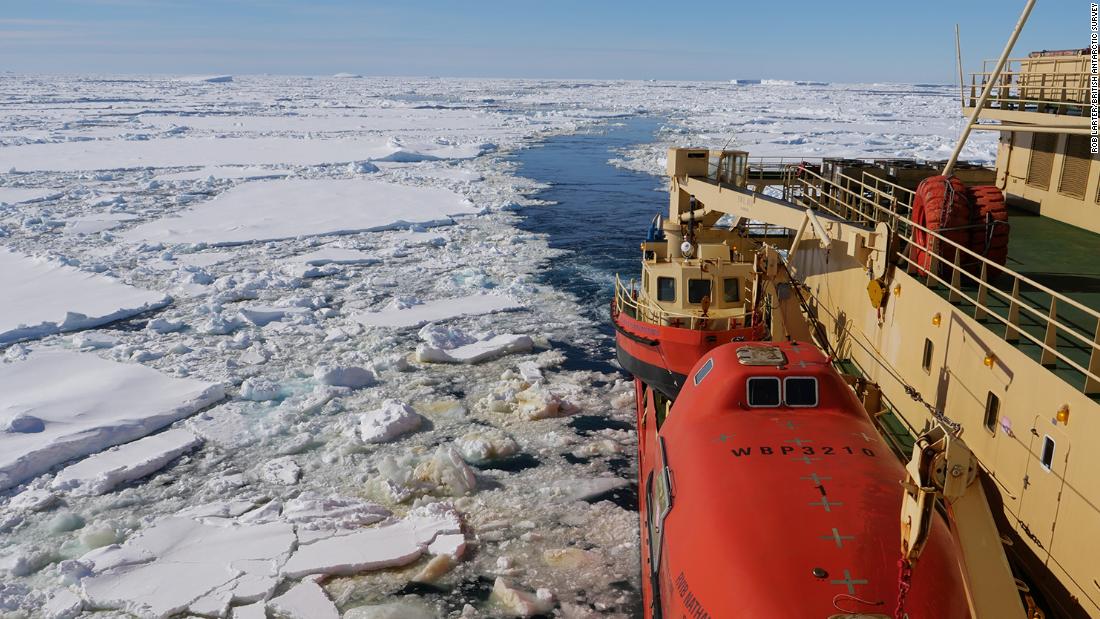 The results published in The Cryosphere magazine show that the ocean floor is deeper than previously thought, with deeper channels leading to the ground line, where the ice meets the bed.

Ice draining from the giant Thwaites Glacier into the Amundsen Sea in West Antarctica already accounts for around 4% of global sea level rise, and scientists say it is highly susceptible to climate change.

Over the past three decades, the rate of ice loss from Thwaites, which is about the size of Great Britain or the US state of Florida, and its neighboring glaciers has increased more than five times.

If the Thwaites collapse, it could lead to a sea level rise of about 25 inches (64 centimeters), and researchers are trying to find out how soon this will happen.

Scientists from the International Thwaites Glacier Collaboration (ITGC) collected data by flying over the glacier in a British Antarctic Survey (BAS) Twin Otter plane and mapping the sea floor from the US Antarctic program RV Nathaniel B. Palmer icebreaker.

The hidden cavities beneath the ice shelf are likely to be the path through which warm ocean water passes under the ice shelf to the ground line, they said.

“The Thwaites Glacier itself is probably one of the most significant glaciers in West Antarctica, because it’s so big, because we can see it’s changing today,” Dr. Tom Jordan, a BAS aerogeophysicist who led the aerial survey.

“Also, we know that its bed dips and gets deeper and deeper under the ice sheet, which means that, in theory, you can get a process called sea ice sheet instability. And once it starts to retreat, it will. just keep withdrawing. “

Jordan said the next step was to incorporate data from the channels, some of them 800 meters deep, into simulations of how the ice sheet will respond in the future.

Before now, he said, the ITGC has not been able to accurately quantify sea level rise in West Antarctica “because there was so much uncertainty about understanding ice sheet processes and how the glaciers will respond over time “.

“I think this is a big step in helping to understand that,” he added.

Jordan said geoengineering and channel blocking suggestions are not logistically feasible on such a remote site. A simpler solution would be to “tackle climate change”.

“Eventually, we will be able to tell governments and policy makers, this is what will happen … we will actually have a fair and very limited estimate of what will happen to the Thwaites Glacier,” Jordan said.

Once scientists are able to demonstrate the projected sea level rise in relation to West Antarctica, he said, they will have more evidence when they call for action to mitigate climate change.

The team collected data from the Dotson and Crosson glacier and adjacent ice shelves from January to March 2019. The exceptional sea ice breakdown in early 2019 allowed the icebreaker to detect over 2,000 square kilometers of seafloor on the front. frozen glacier.

The surveyed area had been hidden under part of the floating ice shelf that extended from the Thwaites Glacier, which had shut down in 2002, and was therefore often inaccessible due to thick sea ice cover.

#AskNASA How do astronauts use the potty in space? – NASA

There is too much gold in the universe. Nobody knows where it came from.