Toots Hibbert, pioneer of reggae who instilled soul in the genre, died at 77 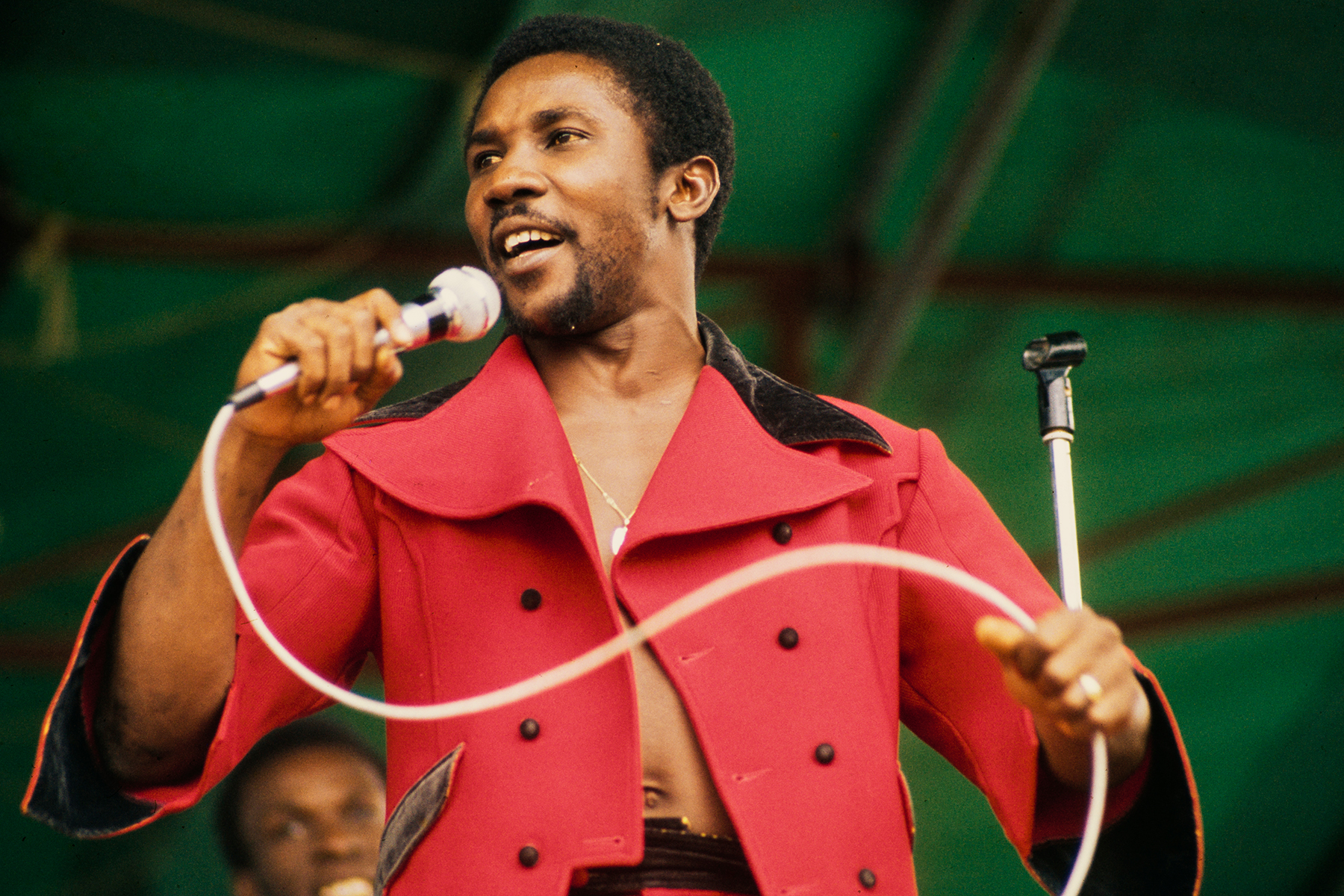 Frederick “Toots” Hibbert, frontman of the pioneering reggae group Toots and the Maytals and one of the greatest voices in popular music, died on Friday night at the age of 77.

“It is with the deepest of hearts to announce that Frederick Nathaniel ‘Toots’ Hibbert died peacefully this evening, surrounded by his family at the West Indian University Hospital in Kingston, Jamaica,” his family said in a statement. “The family and their management team would like to thank the medical teams and professionals for their care and diligence and ask that their privacy be respected during their time of pain. Mr. Hibbert outlived his 39-year-old wife, Miss D, and his seven of eight children. “

A cause of death has not been revealed, but the reggae giant was hospitalized last month after showing symptoms consistent with the coronavirus. He was later put into a medically induced coma where a representative of the musician said he was “fighting for his life”

“I spoke to him a few weeks ago [and] I told him how much I loved him and what he means to me, “Ziggy Marley said in a statement.” We laughed and shared our mutual respect. I am completely saddened tonight. I will miss his smile and laughter [and] its genuine nature. [Toots] he was a father figure to me; his spirit is with us [and] his music fills us with his energy. I’ll never forget it. #founding father

“RIP TO THE MIGHTY AND POWERFUL NYAH FYAH BALL,” he added, referring to Toots’ nickname.

Hibbert’s death comes just weeks after Toots and the Maytals released their new album, You have to be tough, the band’s first full-length LP in more than 10 years and now a milestone in Hibbert’s extraordinary career of six decades. Hibbert was instrumental in not only bringing reggae to the world, but also creating its sound and, by his own explanation, coining its name in his 1968 song “Do the Reggay”.

To form this new style, Hibbert infused reggae precursors such as rocksteady and ska with elements of the traditional Jamaican chin, as well as gospel, soul, R&B and rock & roll. He could start a party as easily as he could deliver spiritual reflections and rallying cries of social justice, all with a voice that resembled the likes of Otis Redding and Ray Charles, but it was always distinctly “Toots”.

Hibbert was born on December 8, 1942 in May Pen, Jamaica, a town about 30 miles west of Kingston. His parents, his father a landowner and entrepreneur; his mother, a nurse and a midwife, were both strict Seventh-day Adventist preachers. Hibbert, his brothers and sisters spent the afternoons after school singing in church.

Hibbert’s mother died when he was eight, and his father died three years later. As a teenager, Hibbert moved to Kingston where he lived with his older brother John (the one who had nicknamed him “Little Toots”) and found a job in a barbershop. In 1962, the same year that Jamaica gained independence from the UK, singers Jerry Matthius and Raleigh Gordon heard Toots sing at the barber and the trio formed the Maytals.

The group recorded a number of first singles at Coxsone Dodd’s Studio One, including their first hit, the party “Fever” and other gospel-inspired songs such as “Six and Seven Books of Moses”. In 1966, the Maytals won the Jamaican Independence Festival’s first Folk Song Contest with “Bam Bam”, a decisive statement from Hibbert that opened with the lines: “I want you to know that I am the man / fighting for the right, not wrong. “(The group would win the competition again in 1969 and 1972.)

In the mid-sixties, the Maytals were at the forefront of a booming musical environment that included other upcoming legends like Bob Marley and the Wailers, Lee “Scratch” Perry, Peter Tosh and Jimmy Cliff. “It was competitive and friendly, a golden age,” Hibbert recalled recently in a profile for Rolling Stone.

But just as his career was taking off with a tour of England on the horizon, Hibbert was arrested in 1967 for marijuana possession and spent nine months in a low-security prison. Hibbert maintains his innocence to this day, insinuating that it may have been a configuration invented by rivals in the music industry, even though he never got to the point of naming names. But despite this drawback, Hibbert’s career was hardly a success: upon his release, Toots and the Maytals recorded “54-46, That’s My Number”, a song of righteous indignation inspired by Hibbert’s incarceration that became the first major success of the group outside of Jamaica.

Over the next few years, Toots and the Maytals embarked on an incredible run that would help define reggae and see their music spread to England, Europe and the United States. There were hit singles like “Monkey Man” and “Pomp and Pride”, and then a couple of career-defining performances – “Pressure Drop” and “Sweet and Dandy” – featured in 1972’s Jimmy Cliff cult classic, More difficult they come. When Toots and the Maytals released what would become their seminal album, Funky Kingston, in 1973, they had cultivated the kind of mystique outside Jamaica that would solidify their legendary status in the following years.

The next two Toots and Maytals records, from 1973 In the darkness and 1976 Reggae has a soul, were just as well received, and the band scored opening points for acts like the Who and the Eagles. The group toured and recorded regularly throughout the 1970s, and by the end of the decade their music was proving instrumental in the budding punk movement. (The Clash was one of many acts to cover “Pressure Drop”.) In 1980, Toots and the Maytals also entered the record book, recording, pressing and releasing a live album, Live in the Palais, in just 24 hours.

The group disbanded in the early 1980s and although Hibbert continued to tour regularly as a solo artist, he did not record another album until 1988. Toots in Memphis. The record paired him with the legendary Jamaican duo of Sly Dunbar and Robbie Shakespeare, and earned Hibbert his first Grammy nomination for Best Reggae Recording. In the mid-1990s, Hibbert reformed Toots and the Maytals – albeit this time without co-founders Matthius and Gordon – kicking off another prolific period of touring and studio work.

In 2004, Toots and the Maytals released a career-ending standout, True love, a duet album that saw Hibbert reinvent some of his most famous songs with a host of guests including Willie Nelson, Bonnie Raitt, Shaggy, Eric Clapton, the Roots, Trey Anastasio, No Doubt, Keith Richards and Bunny Wailer. True love won Best Reggae Album at the 47th Grammy.

“As a singer, he’s great,” Richards said Rolling Stone by Hibbert. “His voice reminds me a lot of Otis Redding’s timbre. When you hear him do “Pain in My Heart,” it’s a mysterious resemblance. I think he knows himself. He’s her man and he knows the contribution he made, which is why he’s still around. You know, every time I get a call from Toots, I run. “

Hibbert continued to shoot regularly, although in 2013, a fan threw a bottle of vodka on stage during a concert in Virginia that hit Hibbert in the head. He suffered a concussion and canceled the remaining shows. In June 2016, Hibbert finally returned to the stage, as he also threw himself into his work at his home studio – the so-called Reggae Center – while continuing to deal with injury-related headaches and anxiety.

As Hibbert said Rolling Stone, he felt compelled to continue working to provide for friends and family. (Despite all his success, Hibbert – like so many reggae artists – was receiving a string of nasty and exploitative contracts; he said he doesn’t even see the royalties from the rides his music gets in the arrivals terminal at Kingston airport. .)

Hibbert’s work at the Reggae Center culminated in a wild two-day recording session late last year that led to Toots and the Maytals’ You have to be tough. The album was produced by Zak Starkey and features contributions from Starkey’s father Ringo Starr, as well as Sly Dunbar, Cyril Neville and Ziggy Marley, who joins Toots on a cover of Bob Marley’s “Three Little Birds”. As the latest offering of his career, he sees Hibbert playing the role he has always played and communicating the things he has always communicated.

“I don’t know how I got the idea that I would be a prophet,” he said Rolling Stone. “It was the spirit of the Lord moving through me in mysterious ways, it was within me. To be a prophet you have to believe in yourself, believe in God, believe in what you do. You take your time and don’t try to show off. A prophet can be a spiritual person or a soothsayer, but if you say something to someone and it doesn’t come true, they won’t believe you anymore. I always try to tell the truth. “