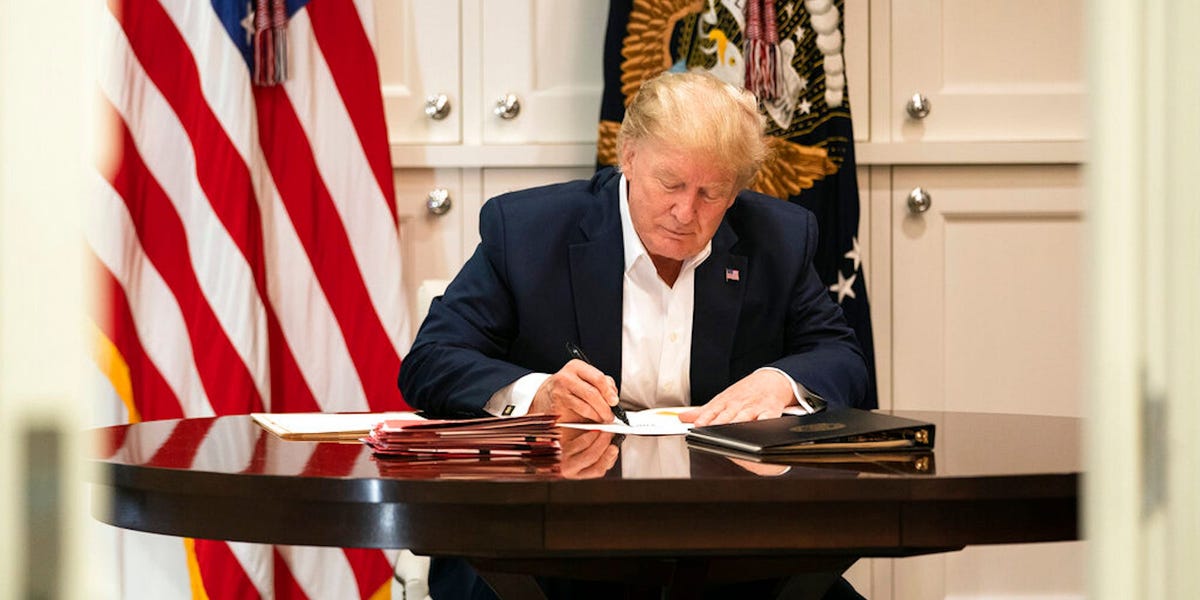 The White House on Saturday night released portrait images of President Donald Trump at work at Walter Reed Army Medical Center, to reassure the American people about the president̵

One image shows the president, in a white shirt, working in the conference room in the suite of rooms reserved for the hospital president, the White House said.

Another image released by the White House shows the president wearing a blue blazer and shirt signing a document in the hospital’s presidential suite.

In a tweet on Saturday night, the president’s eldest daughter, Ivanka Trump, shared one of the president’s images with the message: “Nothing can stop him from working for the American people. IMPLICABLE!”

“That boy is a machine. @realDonaldTrump working at Walter Reed, “tweeted Ben Williamson, a senior communications consultant at the White House.

But critics point to aspects of the images that indicate they may be more of a publicity stunt than compelling evidence that the president is recovering and capable of fulfilling his presidential duties.

In a series of tweets, Jon Ostrower, editor-in-chief of Air Current, a digital aviation publication, noted that according to image data provided by The Associated Press, the photos were taken just 10 minutes apart, at 5: 25:59 pm and 5:35:40 pm ET Saturday.

But the images were shot in different rooms, with the president wearing a blazer in one photo and just a shirt in another.

Andrew Weinberg, a White House correspondent for outlets including The Independent, noted that in an image Trump appears to be signing his name on a white sheet of paper with a marker.

The images were released Saturday in an effort to reassure Americans about the president’s health, as contradictory information emerged from official information sources and swirling rumors.

The White House did not immediately respond to a request for comment on questions posed about the images.

In a video posted on Saturday, Trump said he felt “much better now” and commended the medical staff for the care he had received.

“We are working hard to get me back,” he said. “I have to go back because we have yet to make America great again.”

In a press conference on Saturday, Trump’s chief medical officer, Navy Commander Dr. Sean Conley, said the president’s condition was improving, his fever had subsided, and he was not being given extra oxygen. Conley, however, did not want to say whether the president ever needed supplemental oxygen.

But chief of staff Mark Meadows later told reporters of the president’s condition which continued to be severe: “We are not yet on a clear path to a full recovery.”

The Washington Post later reported that Trump had been annoyed by Meadows’ comments and ordered aides to give a more positive account of his condition.