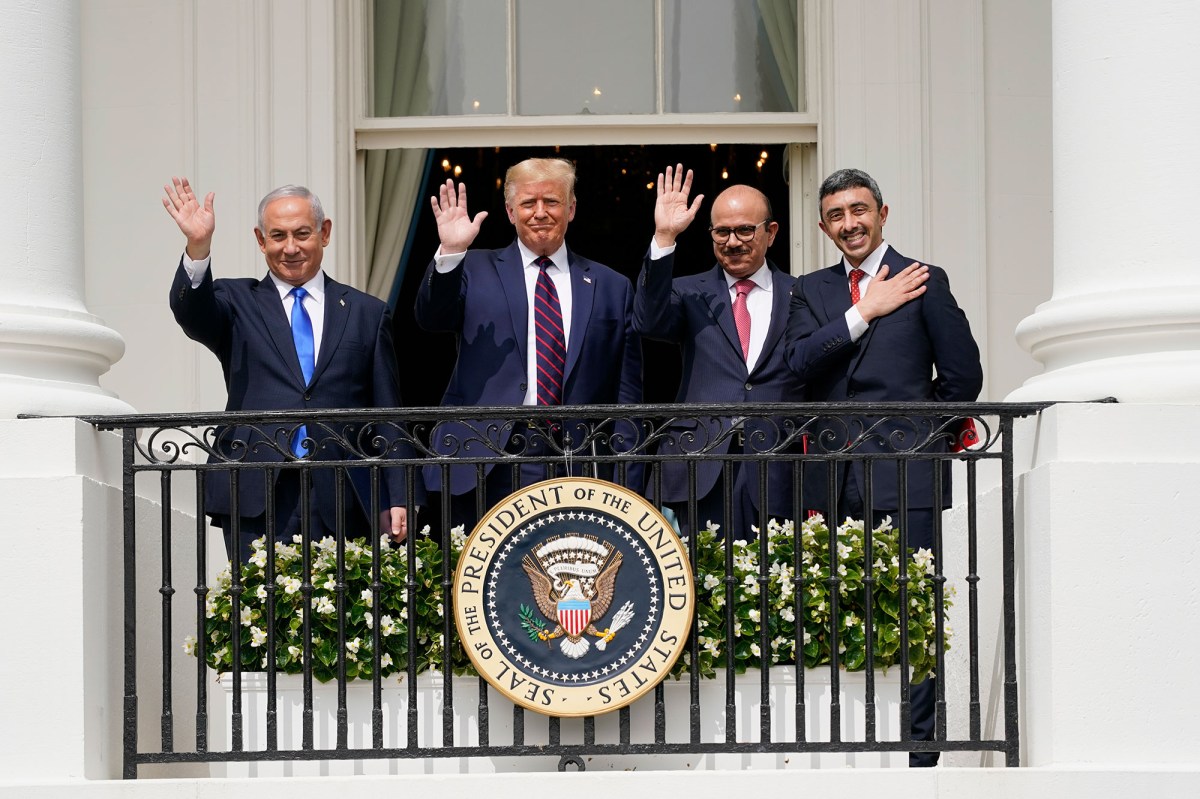 President Trump on Tuesday announced “the dawn of a new Middle East” as he hosted regional leaders for the signing of the “Abraham Accords” that normalize relations between Israel and two Arab countries.

Bahrain and the United Arab Emirates are the third and fourth Arab countries to establish diplomatic relations with Israel. The breakthrough also established direct commercial flights between Israel and the UAE.

“We are here this afternoon to change the course of history,”

; Trump said from a balcony overlooking the South Lawn. “After decades of divisions and conflicts, we mark the dawn of a new Middle East.

“In the entire history of Israel there have previously been only two such agreements. Now we have reached two in one month. And there are more to follow,” Trump said.

“These agreements will serve as the basis for global peace across the region, which no one thought was possible.”

Netanyahu said: “I am grateful to you, President Trump, for your decisive leadership … you have successfully brokered the historic peace we are signing today – a peace that has broad support in Israel and America. [and] in the Middle East “.

The Israeli leader said that “history has taught us that force brings security, force brings allies and, ultimately, and this is something President Trump has repeated over and over – in the end, force brings peace.” .

After addressing the crowd from the balcony of the White House, the four leaders sat at the benches on the lawn to sign the deal, with national flags placed behind them.

In addition to the bilateral agreements signed by Israel, the United Arab Emirates and Bahrain, all three are signing a document called the “Abrahamic Agreements” named after the patriarch of the three major monotheistic religions of the world.

“This day is a pivotal point in history,” Netanyahu said. “Heralds a new dawn of peace.”

Speaking to reporters before signing the document, Trump said “we are a long way off the road with about five countries, five additional countries.”

The developments are a major achievement for Trump, and even his Democratic presidential challenger, Joe Biden, has praised historic accolades as “something good.” In a Tuesday morning interview on “Fox & Friends,” Trump predicted that the Palestinians would eventually make a deal as well.

“Many more will arrive in a short period of time, and eventually the Palestinians will also arrive,” Trump said.

A Norwegian official named Trump for the Nobel Peace Prize last week for his role in the UAE-Israel deal, before Bahrain joined.

Trump often credits himself with erasing decades of controversy over Israel, which he says has introduced a new realism to the longstanding conflict.

As president, Trump moved the U.S. Embassy in Israel to Jerusalem, limited aid to the Palestinians, and recognized Israeli sovereignty over the Golan Heights, a mountainous area seized from Syria in 1967 after being used to bomb the Israeli areas.

Middle East peace efforts are led by Trump’s son-in-law and advisor, Jared Kushner, who is Jewish and married to Ivanka Trump.

As part of the US-mediated normalization of economic relations this month between Serbia and Kosovo, Muslim-majority Kosovo has also agreed to recognize Israel. Serbia has agreed to move its embassy to Jerusalem.

Egypt was the first Arab country to recognize Israel in 1979, followed by Jordan in 1994.

Ahead of Tuesday’s ceremonial event, Trump met privately with Bahraini and UAE diplomats and with Netanyahu. He presented the Israeli leader with a golden key that he said was a “key to the White House” and said he anticipated a “very fair” US-Iran deal after the elections.

New York Rep Lee Zeldin, one of only two Jewish Republicans in Congress, told the Post that he attributes the new deal, in part, to shared concern over “Iranian aggression” and the fact that the Trump administration “has made very clear to these Arab countries it is the top priority for the United States to strengthen relations with Israel. “

Last week, on the anniversary of 9/11, Trump linked diplomatic developments with his withdrawal of US troops in Afghanistan, Iraq and Syria.

“The sand was loaded with blood. And now you will see that a lot of that sand will be loaded with peace, “Trump said.