Updates from COVID-19 in Illinois: Here’s what’s happening on Thursday 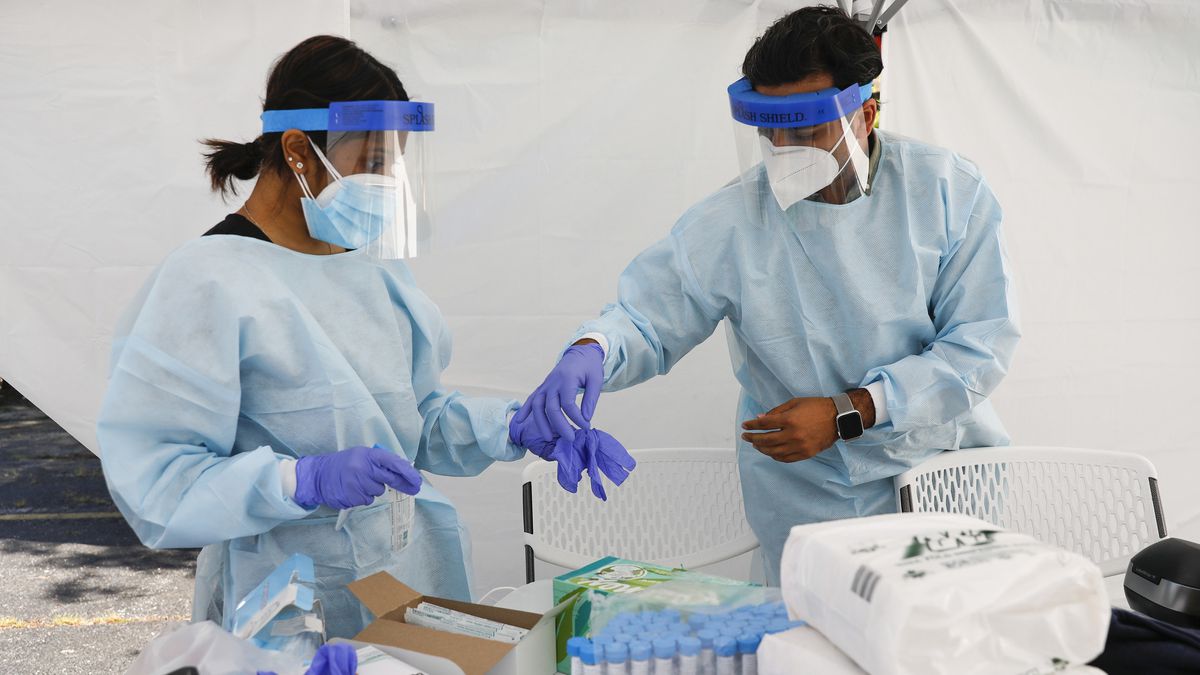 The daily number of new known coronavirus cases announced Thursday by Illinois officials was the highest in nearly five months, except for one day in early September when the state caught up with a delay in testing.

The 3,059 new cases known represent the first time the daily tally has exceeded 3,000 since May 14, when the Illinois Department of Public Health reported 3,239 cases. The department reported 5,368 new cases on September 4, but this was due to a backlog in processing test results.

In addition to the recently confirmed cases, which bring the total number of known infections to 31

0,700 statewide since the start of the pandemic, officials also reported 32 more deaths on Thursday. This brings the death toll to 8,910.

Officials reported 72,491 new tests in the past 24 hours. The statewide seven-day positivity rate is 3.7%.

The new statewide numbers come as Governor J.B. Pritzker said Wednesday that the gains most regions in Illinois had made in reducing COVID-19 positivity rates in recent weeks had “cooled down a bit.” The governor particularly noted that the northeastern region that includes Lake and McHenry counties has seen a turnaround after a period of decline.

Here’s what’s happening Thursday with COVID-19 in the Chicago and Illinois area:

The daily number of new known coronavirus cases announced Thursday by Illinois officials was the highest in nearly five months, with the exception of one day in early September when the state caught a delay in testing.

The 3,059 new cases known represent the first time the daily tally has exceeded 3,000 since May 14, when the Illinois Department of Public Health reported 3,239 cases. The department reported 5,368 new cases on Sept. 4, but this was due to a backlog in processing test results.

In addition to the recently confirmed cases, which bring the total number of known infections to 310,700 statewide since the start of the pandemic, officials also reported 32 more deaths on Thursday. This brings the death toll to 8,910.

The state has received results from a near-record number of coronavirus tests in the previous 24 hours, with 72,491 screenings reported for a one-day positivity rate of 4.2%.

10:35 am: Willie Wilson, who is running as an independent against US Senator Dick Durbin, says he tested positive for coronavirus

Willie Wilson, the entrepreneur and frequent candidate for political office who is launching an independent challenge to United States Democratic Senator Dick Durbin, announced Thursday that he tested positive for COVID-19 and will begin a 10-day quarantine.

“I am experiencing mild symptoms right now. However, I am confident that we will beat COVID-19, ”said Wilson, 72, a distributor of medical and food services gloves who also has his own gospel orchestra and record distribution company.

10:34 am: City Lit Books in Logan Square will close on December 1, victim of the pandemic

The pandemic has claimed City Lit, a vibrant independent bookstore and a fixture in the Logan Square neighborhood. Citing a 50% drop in revenue, owner Teresa Kirschbraun said the store will close permanently on December 1. City Lit maintained its staff of four during the pandemic with the help of a loan from the Federal Wage Protection Program, Kirschbraun said. But amid rent, staff and book costs, the store, which remained closed during the pandemic, operated at a significant loss. City Lit offered online orders and curbside pickup, but Kirschbraun said the security protocols required to reopen the store don’t lend themselves to a quality shopping experience.

“The point was the joy of that, the joy of being with the people who came all the time who loved the books,” Kirschbraun said.

Furthermore, it was not clear that people would enter sailing if City Lit opened its doors to the public. Pedestrian traffic in the neighborhood has changed dramatically, he said. City Lit accepts curbside pickup orders until October 15. November 30th is the last day for online orders.

9:25 am: Regeneron seeks emergency approval from FDA for experimental antibody cocktail that Trump, without evidence, claims to have cured

Drug manufacturer Regeneron said Wednesday evening that it had filed an application with the Food and Drug Administration for emergency approval of the experimental antibody cocktail that President Donald Trump had praised a few hours earlier without evidence as a “cure” for the coronavirus.

The company said access to treatment would be extremely limited at first, with only enough doses for 50,000 patients, a far cry from the “hundreds of thousands” of doses Trump said in a video posted Wednesday that he would soon make available. . to Americans for free.

There is no evidence that the treatment is why she felt better, and her doctors said she took other medications as well.

8:53 am: Trump refuses to have a virtual debate with Biden after contracting COVID-19: “They cut you off when they want”

President Donald Trump vowed on Thursday not to participate in next week’s debate with Democratic candidate Joe Biden after organizers announced it will virtually take place due to the president’s diagnosis of COVID-19.

“I’m not going to have a virtual debate,” Trump told Fox Business News moments after the non-partisan Commission on Presidential Debates announced the changes.

“It’s not acceptable to us. I easily beat him in the first debate,” the president said. “I’m not going to waste my time in a virtual debate. That’s not what they’re talking about … they cut you off whenever they want.”

Trump told Fox presenter Mario Bartiromo had been cured Regeneron, one of the drugs that was given to him by doctors at Walter Reed Military Hospital, and said he didn’t think he could spread the coronavirus.

“I don’t think I’m contagious at all,” Trump said.

8:49 am: Parents of players are not allowed to attend the Wisconsin Badgers home inauguration on October 24 due to spike in COVID-19

Parents of players will no longer be admitted to the inauguration of the University of Wisconsin football team on the weekend of October 24.

Only essential staff – players and coaches from both teams, public safety officers, stadium operations staff and a limited number of media – will be admitted to the stadium. UW will face Illinois on October 23 or 24, with the game’s starting date and time yet to be determined.

Entries have been called, ideas proposed, finalists selected and now the winners of the Chicago Winter Design Challenge have been announced, which aims to solve the problem of how to continue dining outdoors in cold weather and has collected more than 600 entries both serious and comical. (I haven’t finished Leaf-blowers = victory yet.) After two preliminary rounds of evaluation by the IDEO design studio and the city of Chicago, 26 finalists were chosen and presented to a jury made up of architects, designers, chefs, restaurateurs and waiters, who have chosen the last three feasible and safe proposals. Each of them will take home a $ 5,000 cash prize.

Block Party by Neil Reindel: It takes a parking lane and converts it into outdoor seating modules. Blocks can be arranged according to preferences and even combined together – a single block module can hold two people, with size increasing by two with each additional block. Reindel is an urban designer and planner and also an adjunct professor at Northwestern University.

Heated Tables by Ellie Henderson: A modification of the Japanese kotatsu, a small table covered with a blanket that also has a small electric stove on the underside. An additional table top is placed above the blanket. This proposal was inspired by Henderson’s experiences in Japan.

6:51 AM Wilmette’s American Legion last post, named after a soldier who died during the 1918 pandemic, is melting: “COVID was the last straw”

It’s been over a century since a 22-year-old North Shore US Army soldier died during the 1918 flu pandemic while aboard a ship bound for Europe.

Peter J. Huerter, who had hoped to serve in World War I, was buried at sea that October. Back home in what is now Wilmette, his grief-stricken family and friends paid tribute to the young man by naming one of two new American Legion posts in the area in his honor.

But this month, amidst the ravages of the COVID-19 pandemic, the last remaining American Legion seat in Wilmette will cease operations and its century-old abandoned headquarters is slated for demolition and a farewell salute with 21 guns by the end of the ‘year.

“We just don’t have the power to continue, and COVID was the last straw,” said Andy Haszlakiewicz, 74, of Wilmette, a US Army veteran and former Post 46 commander.

05:00: Illinois confirms COVID-19 outbreaks in 44 schools this school year but does not say where they occurred

Almost two months after the school year began, Illinois public health officials said they had verified COVID-19 outbreaks in at least 44 school buildings across the state, but declined to say where those occurred. cases and have recognized that they may not know the full extent of the virus spreading in schools.

Unlike many other states, Illinois does not publish the number of cases linked to schools or which schools have been affected, although parents and educators try to gauge whether in-person learning is safe. State health officials released the overall numbers at the request of the Tribune and ProPublica Illinois.

With more than 1,800 public schools operating in person at least part-time, along with an untold number of private schools, the outbreaks represent a small fraction of Illinois schools in session, according to an analysis of state education data. Most of the outbreaks were small – two or three cases in each school – but at least 105 students and 73 employees in public and private schools were affected.

State health officials said many cases of COVID-19 seen among children are related to out-of-school gatherings and other community events, while acknowledging that local contact-tracing efforts likely missed some school-related cases.

This story is a collaboration between the Tribune and ProPublica Illinois.

Latest news on the coronavirus

Stay up to date with the latest information on the coronavirus with our latest news alerts.

Here are five things that happened on Wednesday related to COVID-19: