US Coronavirus: America ranks at the top of the world’s 1 million death toll 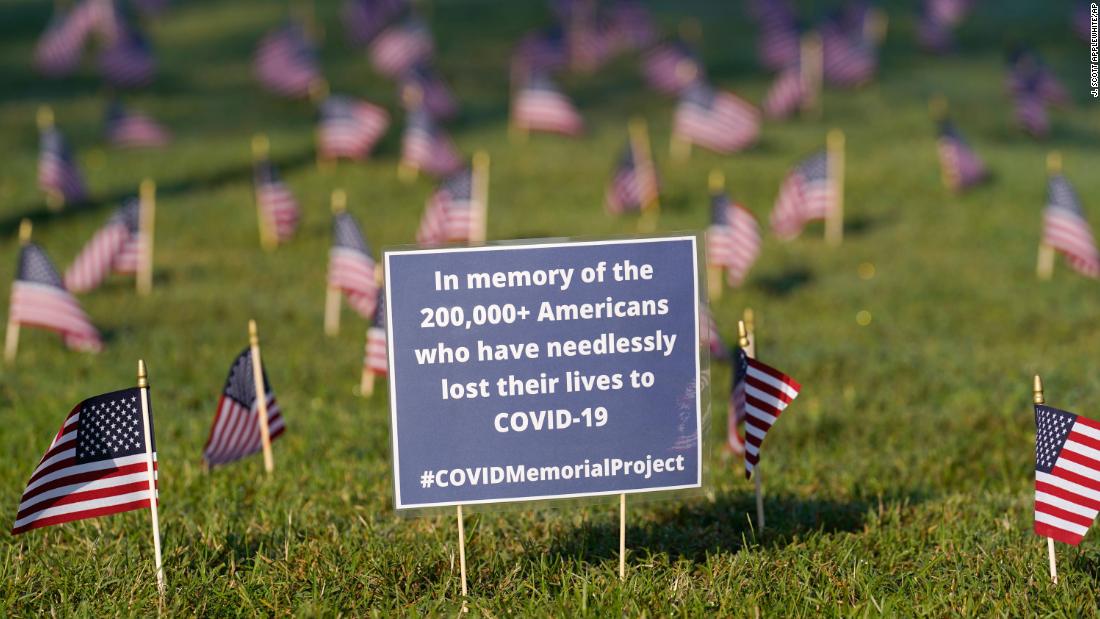 And with recent spikes in cases, health experts warn that things could soon get worse in the United States.

Track cases in your state

With fall and winter soon bringing people indoors and bringing flu season with it, experts say Americans will need to be consistent with the following recommended guidelines. Wearing masks, socially distancing and avoiding large crowds will be key, experts say, along with authorities stepping up tests as infections rise again.

The United States currently ranks first in the total number of reported coronavirus deaths worldwide and sixth per 100,000 people.

The Johns Hopkins tally shows that the United States, Brazil, India and Mexico account for over 50% of deaths worldwide.

Some states fight the spikes while others ease restrictions

As trends vary in the United States, some local leaders are returning to normal while others are holding back efforts to combat the spread of the virus.

Chicago bars, restaurants, gyms and personal services will be able to expand service on October 1, due to “sufficient progress in the fight against Covid-19,” Chicago Mayor Lori Lightfoot announced Monday.

“Over the past six months, we’ve been asking so much from our business community. But each time, our businesses have come forward,” Lightfoot said in a press release Monday. “The next step in our reopening is good news for business owners, the communities they serve and the thousands of residents who work for them.”

And California, a state hit hard by the pandemic, is seeing coronavirus positivity rates, hospitalizations and new cases declining, Governor Gavin Newsom said on Monday, but warned that numbers could start to rise again if residents don’t stay alert. .

Meanwhile, New York Governor Andrew Cuomo said the state would release guidance earlier this week to reopen “covid safe” homeless shelters, noting an increase in cases among homeless camps. Cases are also increasing at an “alarming” rate in parts of Brooklyn and Queens, the New York Department of Health said.

Nearby, New Jersey will receive 2.6 million rapid coronavirus tests from the federal government to help combat spikes in cases.

Children account for about 10 percent of coronavirus cases, but people should still pay attention to the spread of the virus in that age group, Dr Anthony Fauci said Monday.

“Babies get infected. And we’d better be careful to fend off infections in babies,” Fauci told CNN’s Brian Stelter, adding, “It’s not clear to what extent they transmit” the virus.

Some studies suggest they don’t do it “as efficiently” as adults, said Fauci, who is director of the National Institute of Allergy and Infectious Diseases and a member of the White House Coronavirus Task Force.

“But it’s an evolving situation” and “you have to keep an open mind when it comes to a question like what is the role of children in transmission”.

The U.S. Centers for Disease Control and Prevention released a report Monday that COVID-19 among teenagers aged 12-17 was nearly double the number in children aged 5-11. .

The report included data on 277,285 laboratory-confirmed cases among school-aged children in the United States from March 1 to September 19. Of these cases, 37% concerned children between the ages of 5 and 11 and 63% were adolescents.

The data may underestimate the true incidence of the disease among school-aged children, as testing was often a priority for people with symptoms and those without symptoms may not have been tested, the researchers noted.

The former Belgian king, Albert II, meets his daughter for the first time since she became royal