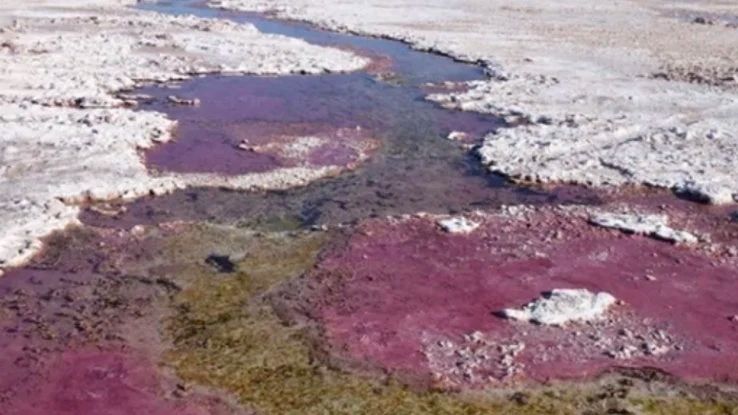 Billions of years ago, long before oxygen was readily available, the infamous poisonous arsenic could have been the compound that breathed new life into our planet.

In Chile’s Atacama Desert, at a place called Laguna La Brava, scientists studied a purple band of photosynthetic microbes living in a hypersaline lake that is permanently devoid of oxygen.

“I have been working with microbial mats for about 35 years or so”, says geoscientist Pieter Visscher of the University of Connecticut.

“This is the only system on Earth where I could find a microbial mat that worked absolutely in the absence of oxygen.”

Microbial mats, which fossilize into stromatolites, have been abundant on Earth for at least 3.5 billion years, yet for the first billion years of their existence there was no oxygen for photosynthesis.

How these life forms survived in such extreme conditions is still unknown, but by examining the stromatolites and extremophiles living today, researchers have identified a handful of possibilities.

While iron, sulfur and hydrogen have long been proposed as possible substitutes for oxygen, it was only with the discovery of “arsenotrophy” in California’s hypersaline lake Searles and Mono Lake that arsenic also became a contender.

Since then, stromatolites from the Tumbian Formation in Western Australia have revealed that trapping light and arsenic was once a viable mode of photosynthesis in the Precambrian. The same could not be said of iron or sulfur.

La Brava life forms also closely resemble a purple sulfur bacterium called Ectothiorhodospira sp., which was recently found in an arsenic-rich lake in Nevada and which appears to photosynthesize by oxidizing the arsenite compound to a different form – arsenate.

While more research is needed to see if Brava microbes also metabolize arsenite, initial research found that the fast-flowing water surrounding these mats is heavily laden with hydrogen sulfide and arsenic.

If the authors are right and the La Brava microbes are indeed “breathing” arsenic, these life forms would be the first to do so in a permanently and completely oxygen-free microbial mat, similar to what we would expect in Precambrian environments.

As such, his mats are a great model for understanding some of the possible earliest life forms on our planet.

While genomic research suggests that La Brava mats have the tools to metabolize arsenic and sulfur, the authors say its arsenate reduction appears to be more effective than its sulfate reduction.

Regardless, they say there is strong evidence that both pathways existed, and these would have been enough to support vast microbial mats in the first days of life on Earth.

If the team is right, then we may need to expand our search for life forms elsewhere.

“In search of evidence of life on Mars, [scientists] they will consider iron and possibly arsenic as well, “says Visscher.

It really is much more than just poison.

The study was published in Earth and environment communications.

Identified driver of the largest mass extinction in Earth history