Breaking News
Home / Science / What is the first species that man led to extinction?

What is the first species that man led to extinction? 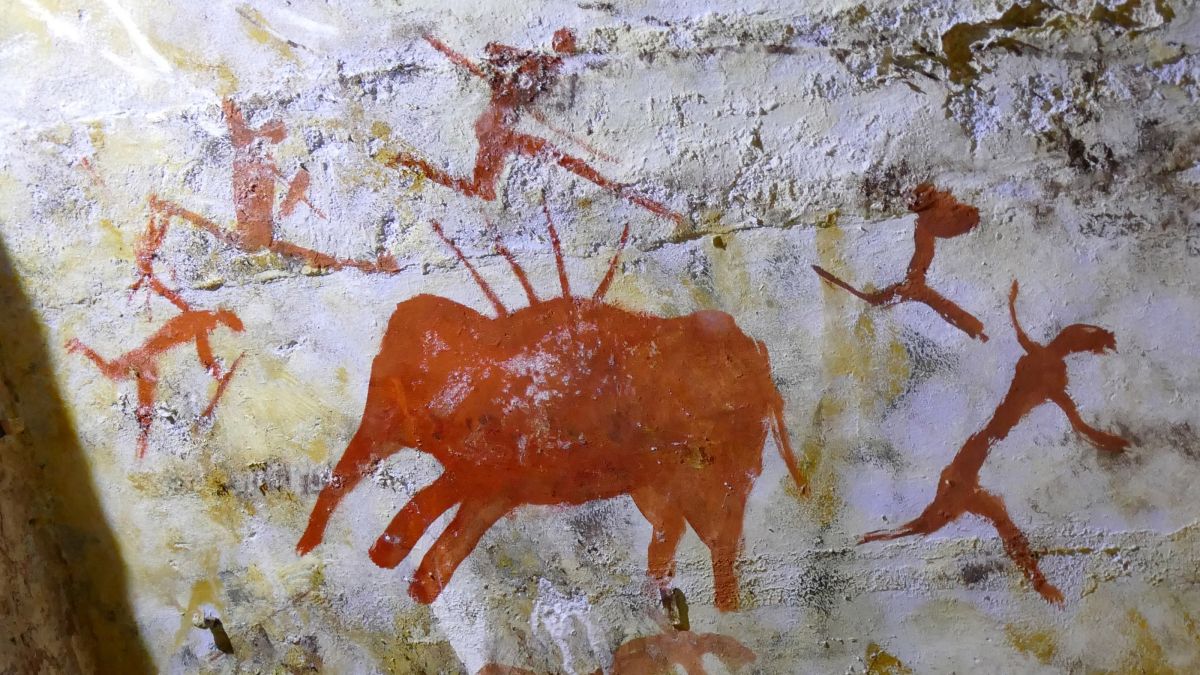 In the late 1600s, in the lush forests of Mauritius, the last dodo took its last breath. After centuries of trouble-free theft in the tropical undergrowth, this species met its untimely demise at the hands of humans, who had arrived on the island less than 100 years earlier. With their penchant for hunting, habitat destruction, and the release of invasive species, humans have undone millions of years of evolution and quickly removed this bird from the face of the Earth.

Since then, the dodo has nestled in our consciousness as the first major example of human-driven extinction. We also used the dodo to ease our feelings of guilt – the creature was fat, lazy, and unintelligent, and as popular story goes, those traits sealed its inevitable fate.

But in reality, we couldn̵

7;t be more wrong, said Julian Hume, a paleontologist and research associate at the National History Museum in the UK. He studies fossils of extinct species and has devoted a portion of his career to correcting the dodo’s sad reputation. By digitally modeling the remains of a dodo’s skeleton, he produced a 3D digital reconstruction this draws a completely different picture of a bird that was faster, more athletic and much smarter than popular culture has led us to believe. “It was nothing like this big, fat, bulky thing that was just swaying. This bird was super adapted to the Mauritius environment,” Hume told LiveScience. Instead, the relentless exploitation of humans was the real culprit behind the dodo’s untimely death.

Related: What could lead humans to extinction?

But that’s not all we did wrong. Despite the commonly held belief, the dodo wasn’t actually the first creature humans led to extinction, not by far. In fact, humanity was wiping out the world’s fauna thousands of years before we saw the dodo. “There was definitely a lot more before and after that event,” Hume said.

So, if the iconic dodo wasn’t the first species we brought to the brink, which animal gets this daunting title instead?

Humans on the move

We have become accustomed to thinking of human-induced extinction of species as a relatively recent trend in our history. However, the researchers found compelling paleontological evidence that dismantles that idea.

“The real problem started when we, as humans, started migrating,” Hume said. This starting point is still debated, but the most recent estimates suggest that the migrations that led to enduring populations of humans spread across the world began with the hominid movement: Neanderthal and also other ancient human relatives Homo sapiens – outside Africa and Southeast Asia, about 125,000 years ago. This is where the evidence gets interesting. As humans left their ancestral homes and continued to colonize Eurasia, Oceania, North and South America over the tens of thousands of years, the fossil record shows a parallel increase in animal extinction. large in build, also known as megafauna in those continents.

“Such as [hominids] migrated out of Africa, you see this incredibly regular pattern of extinction, ”said Felisa Smith, a professor of ecology and evolutionary biology at the University of New Mexico, who studies how animal body sizes have changed throughout history. and his colleagues explained in a 2018 study published in the journal Science, every time our ancestors set foot in new places, the fossil record shows that large-bodied species – the huge prehistoric relatives of elephants, bears, antelope and other creatures – they began to become extinct within a few hundred thousand years, at most. Such rapid extinction times have not occurred anywhere else in the past million years (not since non-avian dinosaurs were wiped out by a asteroid about 65 million years ago.) “The only time you see is when humans are involved, which is really amazing,” Smith said.

Some of those early disappeared species would look like fantastic beasts if they roamed the Earth today. For example, “There was an armadillo-like thing called a glyptodon, which was the size of a Volkswagen bus,” Smith told LiveScience. Glyptodons, many with vicious-looking spiky tails, disappeared from the Americas at the end of the last ice age, about 12,000 years ago, which is likely linked to the earlier arrival of humans there. The number of gigantic Eurasian cave bears, several hundred pounds heavier than today’s grizzly bears, dropped sharply about 40,000 years ago, around the same time that humans began spreading into their habitat. South America was once home to giant land sloths, and humans were also the most likely candidates for their death some 11,000 years ago.

What made large animals, in particular, so susceptible to the spread of humanity? The megafauna likely represented food, or a threat, to incoming humans. Additionally, animals that had never met humans before were likely unwary of these strange newcomers migrating to their pristine lands, which could have increased their vulnerability to attack. Unlike other smaller animals that reproduce more rapidly, megafauna also reproduce more slowly and therefore have smaller populations than other species, Hume explained: “So if you get rid of a large section of [a population] they can’t reproduce fast enough to reconstruct the numbers. “

It was not only hunting that posed a threat, but also the spread of man-made fires that would destroy swaths of habitat and increased competition from humans for food. For example, it is thought that by heavily preying on the same herbivores, an increasing number of hungry humans contributed to the extinction of the short-faced bear, a giant South American species that was once more than 10 feet (3 meters) tall and died about. 11,000 years ago. Climate change, associated with human impacts such as hunting, has also proved a lethal combination for some megafauna – the most famous, mammoths, which went extinct around 10,500 years ago (with the exception of the dwarf woolly mammoth, which survived to about 4,000 years ago on an island off northern Russia). “If you combine climate change with a negative human impact, it’s a disaster,” Hume said.

All this to say that humans have systematically wiped out the species that surround us almost from the very beginning of our history. Our migration has caused “a worldwide disaster,” Hume said. “We haven’t been very kind.” Unfortunately, we have continued the legacy of our ancestors, with, among thousands of other species, the eradication of Madagascar’s hippos 1,000 years ago, the loss of moa birds to New Zealand 600 years agoand the decimation of carrier pigeons 106 years ago. Today we are also responsible for ongoing extinctions.

But that still hasn’t answered the question of which species went extinct first. And here’s the catch: data on man-made extinction across the planet are only reliable up to about 125,000 years ago, but that doesn’t mean we weren’t driving animals to extinction before then in Africa as well. In fact, there is compelling evidence to suggest that before humans migrated, they also unleashed their hunting instincts on the species there.

Related: When did humans find out how to use fire?

Smith’s research revealed that the average body size of African animals 125,000 years ago was only half that of species found on other continents around the world. “Africa is one of the largest continents, so it should have had an average body size similar to that of the Americas and Eurasia, where it was around 100 kilograms. [220 lbs.]”Smith said.” The fact that does not suggest that there was already an effect of hominids on the megafauna in Africa before 125,000 years ago. ”

Basically, since the rest of the story tells us humans are good at sending larger creatures into an ecosystem, we can make a pretty safe guess that hominids in Africa at the time could have been responsible for extinctions by going even further. back in time.

However, there is no way to know for sure what that “first” species would have been, although Smith speculates: “It was probably a species of the elephant family. But whether it is paleomastodon or stegodon,” the latter behemoth with fangs measuring 10 feet (3 meters) in length – “I can’t tell you.”

Clues to the future

We may not have a clear answer to this original question, but perhaps the most important to ask is what the legacy of humanity’s extinction can teach us about conservation, going into the future.

Past extinctions have revealed that when animals, especially megafauna, disappear, there are profound ecological consequences. Whole landscapes transform in the absence of their modeling effects, with changes in vegetation and species diversity. Smith even has research published showing that the decline in global megafauna over the past millennia has led to declines in the amount of methane they have erupted, with potentially transformative consequences for the global climate. Also, when the animals disappear, entire rafts of dependent species fall with them. The iconic dodo features one such cautionary tale: When the birds went extinct, so did a Mauritian dung beetle which relied on dodo feces to survive.

Understanding past man-made extinctions can help us understand what the environmental consequences have been, Smith explained, and how we can limit them in the future by protecting the species that remain. The extinction of the dodo also provides clues that are helping us to preserve ecosystems today. Hume is working on a project to catalog the pollen spores found in the sediments around the dodo fossils, to build a detailed picture of the lush, palm-fringed forests they once roamed. This is helping conservationists rebuild the island with the vegetation it once was. “We are actually reconstructing the exact species of plants and trees from the dodo’s environment, before humans arrived,” Hume said.

A little bit of paradise was lost when we brought the dodo to extinction, not to mention the thousands of species whose demise came before. But perhaps with hindsight and a willingness to learn from our mistakes, some of them can be vindicated.