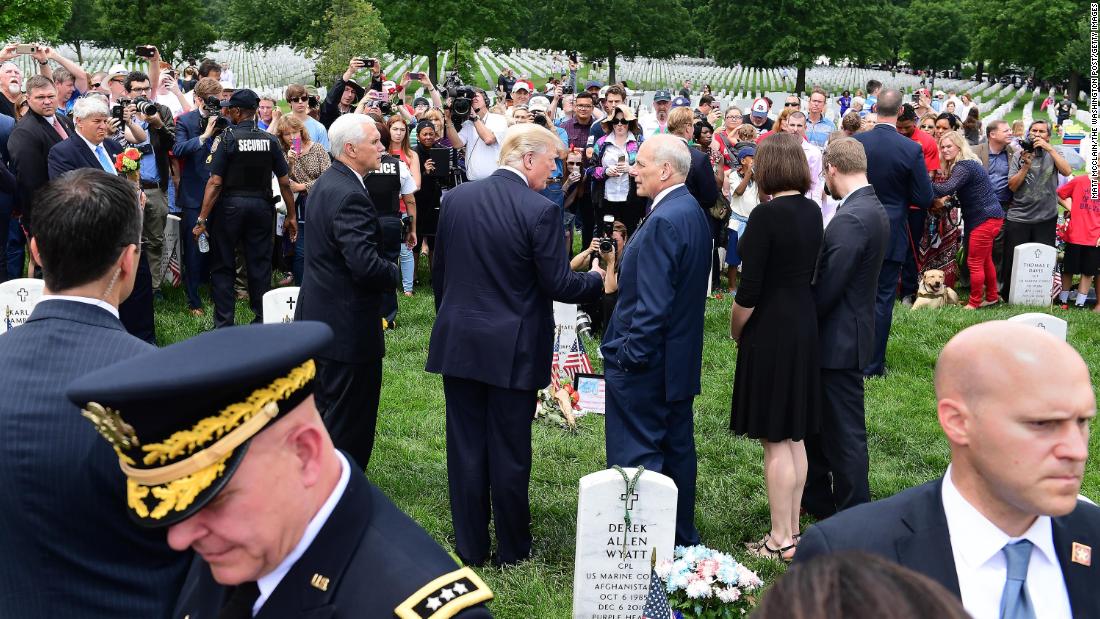 His trial is lonely, but the last time he wrote these letters at our dining table, I went to him on my way to the kitchen. He was crying as his pen moved across the paper.

He returned home safe and sound. The letters were not read. I found them at the bottom of a desk drawer last week as I was packing up our house to move, still sealed, “Don’t open if I don’t leave,” written on them.

They were on my mind a couple of days later when Jeffrey Goldberg’s article in The Atlantic came out, detailing how President Donald Trump had called the US Marines killed in World War I “losers” and “losers.”

It also describes how on Memorial Day in 201

7, Trump visited Arlington National Cemetery with his then Secretary of Homeland Security, General John Kelly, whose son, Robert, a young Marine Corps officer who died after stepping on a mine in Afghanistan in 2010, was buried there.

“He was 29,” writes Goldberg. “Trump should have, on this visit, joined John Kelly in paying homage to his son’s grave and comforting the families of the other fallen service members. But according to sources familiar with this visit, Trump stood by the grave of Robert Kelly, approached his father directly and said, “I don’t understand. What did they get? “”

It is a crude question. And the point is missing.

“Serving something higher than you is why most veterans from my point of view, from my experience, join together,” says Kait Wyatt, a Marine Corps veteran whose husband, Cpl. Derek Wyatt, also a marine, died in Afghanistan in 2010.

“They are doing it out of a sense of patriotism. And that patriotism is not loyalty to a specific political or political party, but to America,” explains Gallegos, who lost his arm in an explosion in Afghanistan.

Americans serve to protect their brothers and sisters in arms.

Major General Paul Eaton served more than three decades in the military, bringing his experience in training young American infantry to Iraq, where he was responsible for training Iraqi forces.

“He was shot down on a stretch of Ho Chi Minh trail just outside Vietnam in Laos,” Eaton explained in a video he posted online criticizing Trump’s remarks on service members, holding his father’s found dog tag. .

But how does a commander in chief who wraps himself up in images of the military, and is responsible for sending them into danger, not understanding it?

To borrow Trump’s words, what does he get out of it?

Members of the military seem to be on this president’s mind only when they serve a purpose.

In Trump’s case, this is popularity by association.

The military is the most respected American institution. Sixty percent of Americans “expresses[ed] a lot of faith in military leaders, “according to a Pew Research Center survey conducted in 2020.

By comparison, 13% say the same of the press and only 6% have this faith in Congress.

For Trump, the military is a muscle for him to flex, whether it’s to include the National Guard military police in the presence of federal law enforcement who pushed peaceful protesters out of the White House, or to deploy troops on duty. active on the US-Mexico border during an immigration. crisis – although it is constitutionally forbidden to play a useful role there – or an expensive taxpayer-funded 4th of July military parade that featured prominently in political videos broadcast during the Republican National Convention.

The military is not that important to Trump when the transaction goes the other way: when they need him. As dozens of US troops in Iraq suffer traumatic brain injuries – “headaches,” the president called them – following an Iranian retaliatory attack that Trump wanted to minimize. Or when Russia places marked bounties on the heads of US service members in Afghanistan and the president doesn’t even mention them when talking to Vladimir Putin.

When Gold Star families exercise the rights their fallen loved ones have sworn to protect – such as the Khan family, who lost their son Humayun to a suicide bomber in Iraq and spoke out against Trump at the 2016 Democratic convention – the president slanders them.

And just this week, when Trump criticized those he considers probable sources for Atlantic history, he was still trying to create a wedge between file-and-file service members and military leaders, accusing his own defense officials of wanting “not to. to do nothing but fight wars. so that all those wonderful companies that make bombs and planes and make everything else happy. “
This politicization of the military is what enraged Kait Wyatt this week when she saw a photo from the 2017 Trump cemetery visit that she hadn’t seen before. In it, the president is talking to General Kelly. Vice President Mike Pence watches as a cameraman captures the moment in a crowd of onlookers taking pictures with their phones.

There, in front of the men, is her husband’s grave.

“You can’t stand on the graves of better men who fought and died for this country while you tear that country apart with your incompetence,” he told CNN.

Those best men and women are ordinary Americans who did an amazing thing: they answered the call. Those who survive often fight for a normal life. They are battling visible and invisible scars simply because, with everything to risk, it is the rare few who have said “send me”.

“What would you risk dying for – and for whom – is perhaps the deepest question a person can ask,” writes war correspondent Sebastian Yunger in “Tribe: On Homecoming and Belonging,” an exploration of the challenges facing military personnel. must face when they return from war.

“The vast majority of people in modern society are able to go through their entire lives without ever having to answer this question, which is both a huge blessing and a significant loss.”

For the commander in chief, never really looking for an answer to this question is a shame.