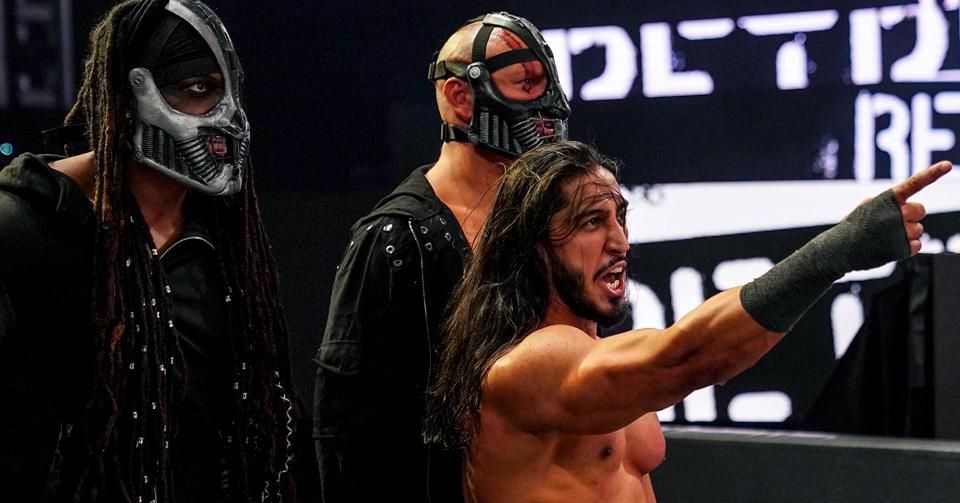 They did it. Eventually they did.

Mustafa Ali challenged MVP to a one-on-one match to resolve their feud.

Ali came out on his own, but obviously all Hurt Businesses joined MVP to play the numbers game. Ali had a big sale of clothesline from MVP and kept one on the rise. The Hurt Business decided it was enough, and they were about to join him, until the lights went on.

RETRIBUTION surrounded the ring and T-Bar and Mace were standing together on the ramp. MVP asked if Ali would join them to help them defeat them. Ali agreed, and then slipped out of the ring to face the two behemoths.

And then he turned slowly with a smile. MVP knew what was going to happen.

Mace, T-Bar and the rest of the group bombed The Hurt Business and destroyed them. Ali returned to the ring, as was RETRIBUTION, and raised his hand as he always does. Slowly, he closed his fist and the lights went out.

Mustafa Ali is the leader of RETRIBUTION. On paper this made more sense. Ali was supposed to be the “Hacker” last year and that corner was abandoned after receiving praise from all sides.

I have chastised this group since its inception and while I really enjoyed Ali being revealed as the leader, I am extremely eager to finally hear the reasoning behind it all. It could be said that Ali turned out to be the leader somehow makes them a stable baby face, and I can’t find a reason not to agree with that argument.

This moment was the highlight of my evening and as a huge fan of Mustafa Ali, I am very happy that he was placed in this role.

This feud was getting dull, but they upped the number and gave him the energy injection he needed.

Seth Rollins ordered Murphy to give him the microphone, similar to how Roman does with Heyman on SmackDown, but Murphy needed Rollins to apologize to Aalyah.

Seth refused and said he could have aired more dirty laundry between the two of them, and also where Aalyah has revealed her true feelings for her family, and needs to figure out who she’s talking to. He is the Messiah and Murphy is the disciple. He repeated it a couple of times and then Dom and Carrillo went out to untie it.

Really digging Dom and Carrillo as a team. Plus, Carrillo with a beard instantly makes him look more mature. The main story here was the tension between Seth and Murphy. Murphy walked over and Seth got mad, and when Murphy did it again, it almost cost them the game. Murphy was able to block Carrillo, and then he walked away.

On the back, Rollins asked Murphy to apologize to him later in the show. When that moment came, Murphy couldn’t apologize.

And then it happened!

Murphy turned to Rollins and beat him hell with a kendo stick, making Rollins apologize to Aalyah. But then the classic silly baby face syndrome caused Murphy to drop the kendo stick and Rollins took over. Aalyah came out to defend Murphy, followed by the Mysterio family, taking her away as Murphy writhed in pain.

It was great. I was ready to cancel this feud last week and they turned my back on me. I’ve been waiting ever since Payback for Murphy to escape this hold that Rollins had on him. Now, will he stay away? This remains to be seen, as they seemed to tease that Murphy might think Aalyah abandoned him in time of need. Let’s see what happens.

In what reminded me of Aleister Black’s fireplace chatter in a dark room months ago, Orton recounted his dirty deeds from last Monday. Then he turned his attention to Drew and said that in order to solidify his legacy, he will have to face Orton once again in a match within Hell in a Cell.

Throughout the promo I was hoping Drew would open the door and, to my surprise, it really happened! He quarreled with Orton until he was separated from Pearce and the officials. He looked angry and I’m here for it.

Okay, yes, three games where Orton has lost all of them so far doesn’t really make sense. My fear is also that Orton will win, leading to a fourth game, and us definitely I don’t need it. Raw is repetition, though.

What doesn’t excite me so much is seeing Orton block Drew in the main event. I was hard on Bobby Roode last week, and that was because he didn’t deserve a title match. It was nothing against him as a fighter. Orton has lost all interaction between him and Drew from SummerSlam.

There were other guys there to get a pin. Let them clash every week at Hell in a Cell. I’m sure we’ll have another kind of match between them before then.

Paralyzer – We have another KO show, and the really great thing about the Owens promo was that for the first time ever we felt what it was like to receive a Fiend Mandible Claw. Until now I didn’t realize how no one has given a real explanation for how the act of the Mandibular Claw makes a person feel. Owens said he felt the anguish and emotions. He was paralyzed and could not move as fear engulfed him.

Then WWE did another terrible Firefly Fun House segment. Most stupid song. Ugh. THEN they had Aleister Black Owens attacked on his way to find Bray. So, it looks like Owens will be drafted into SmackDown because why would Owens have a fight with Bray?

Nia Jax and Shayna Baszler def. The riot squad – This was a fun match and Ruby Riott and Liv Morgan sold deaths for Nia and Shayna. I felt uncomfortable watching Shayna twist Ruby’s arm so I could see the bone and I like … the tendons and the shit. Ew. I wanted them to win, and they almost did, but Shayna then locked Ruby in a great Clutch Kirifuda and sold it so well.

Asuka, Mandy and Dana def. Zelina, Natalya and Lana – Asuka and Zelina’s “feud” doesn’t need to continue. Third place in the standings for Lana. It’s hard not to call it what it is: meanness.

Braun Strowman and Keith Lee finish in double counter-cut – This is getting ridiculous. Lee once again in a match that does not end with a decisive ending. There was no point in playing a game here. The LED board and brawl-shattering tables could have been a segment of its own without teasing an exciting match between two legit beef slices and running a bucket of meh.

The Hurt Business def. the people with whom they quarreled for 3 months – At the end of this match, Ricochet said: “We will keep coming back until you get tired of us.” and I think I started sobbing a little. Brother, we are all tired out. Nothing major happened, which has pretty much been the status quo here for the past month.

Stupidity 24/7 – Gulak took an Orton from last week and dressed as a janitor and pinned R-Truth. Later, Gulak hid behind a garbage can and Truth jumped out of it. Akira Tozawa jumped out of another garbage can, and everyone fought in one. The truth ended up regaining the title. 42 times now!

No Raw Underground again this week, and I haven’t heard of it being released, but I wouldn’t be surprised if it was. The plot progression in RETRIBUTION and Murphy / Seth’s angle was fantastic. I wish WWE weren’t so unpredictable with their creativity, because I worry they bring this positivity to next week. Time for the project!

What were your thoughts, Cagesiders?

“S.N.L.” falsify the final debate and Adele sings (a little)