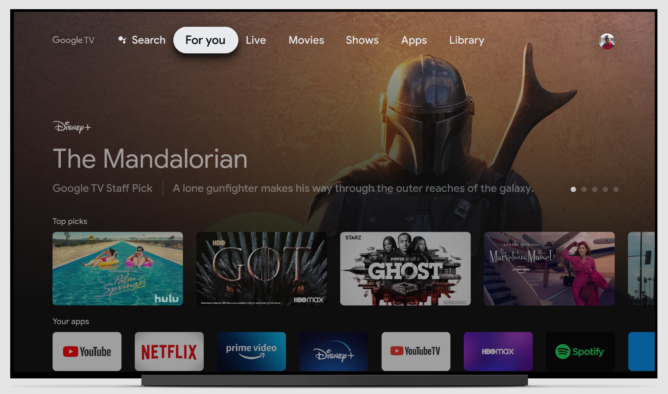 Google isn’t one to avoid confusing branding changes, and the whole Google TV / Android TV thing is just the latest in a long line of examples. The new Google TV interface will eventually arrive on third-party devices, but the operating system will still be called Android TV, at least for a while. At the moment, the new Chromecast with Google TV is the only device to officially support the updated UI, but there is a way to make it work on other Android TV hardware.

How-To Geek has a great explainer on this, but you need to be ready to fiddle with developer settings and ADB commands if you want to make it work. Your ATV device will need to be on Android 9 Pie or later for this to work. The Google TV interface consists of two parts, the Google TV Home launcher and a separate app that manages the search function. How-To Geek has downloads for both, with the first coming from our sister site APK Mirror.

With both installed on your ATV hardware, you will need to enable developer options and enable network debugging so that ADB commands can be executed. You will then need an app called Remote ADB Shell on your phone so that you can send commands to your ATV device. Head over to How-To Geek for exactly what commands you need to use, but it shouldn̵

7;t take too long to get Google TV to work. The key is uninstalling the default Android TV launcher so it doesn’t interfere with the new one.

The Home button on your Android TV device’s remote will now take you to the new home screen, and the search tab should work as expected as well. Warning, this isn’t quite the full Google TV experience – it doesn’t have the new settings menu, and performance may not be as smooth as it should be. It’s not bad as a fallback until your device gets the full update, however, and it’s definitely an upgrade over previous attempts to get it to work on older hardware.